Good Cop Dog Cop: I'm here to bust criminals and lick my own butt...and I'm all out of criminals. 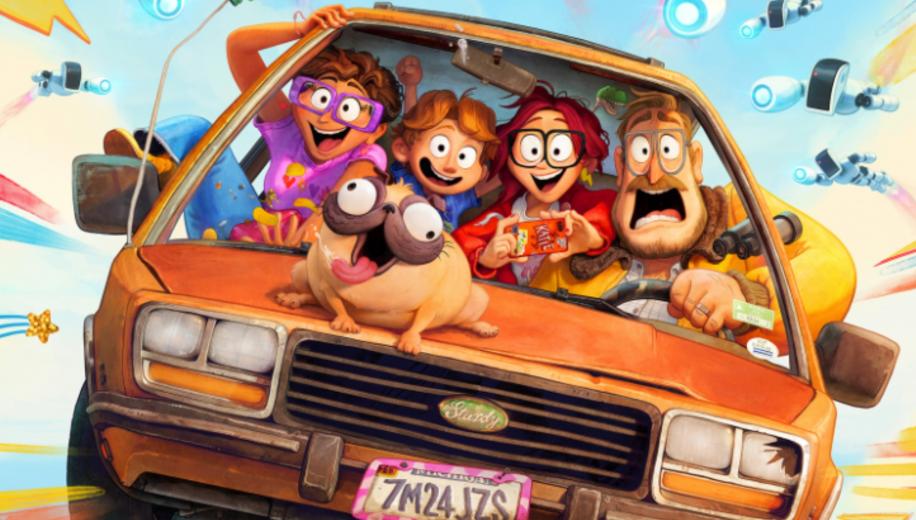 The Mitchells vs The Machines Movie (2021)

When the brains behind The LEGO Movie and Into the Spider-Verse get together with the creative team responsible for hit Disney animation Gravity Falls, you’d be foolish to expect anything less than the perfect family movie for the bank holiday weekend.

Katie Mitchell just got accepted into her dream college. It’s an opportunity to make movies, to meet more people like her and, most importantly, to get away from her crazy family. Katie’s family don’t really get her, but they want to. So, to Katie’s dismay, her dad cancels her flight so that they can all road trip as a family one last time and maybe they’ll learn a few things about each other in the process. Oh, and also the robot apocalypse is happening.

Sony Animations is once again pushing the bounds of computer animated movies. Following the critical acclaim heaped on 2018’s Into the Spider-Verse producers Phil Lord and Chris Miller have produced another genuinely visually unique movie with The Mitchells. A blend of delicate hand-drawn-effect character designs, CGI action, doodles, photo-realism, live action and sock puppets, it’s difficult to overstate how well this mad fusion of visuals works. This movie is delightfully and totally nuts.

...it’s difficult to overstate how well this mad fusion of visuals works.

Co-written by Jeff Rowe, a staff writer on Matt Groening’s Disenchantment, and directed by Michael Rianda (who also provides the voice for the youngest Mitchell, Aaron) the story is a fun adventure featuring a dysfunctional family who dumb-luck their way into surviving a robot uprising. The beats are maybe a little predictable and the tech-gone-bad angle is nothing new but the execution of it all elevates the movie to being something special. The jokes all land thick and fast, with a similar sort of trigger-happy manic abandon to The LEGO Batman Movie (if a little more universal), so that even as you laugh uncontrollably at one joke, you’re dead certain you’ve just missed two more.

The cast are all on great form with the incomparable (but arguably underused) Maya Rudolph and the usually tolerable-at-best Danny McBride doing some fun stuff as the Mitchell parents. A good chunk of the comedy, however, comes from the robot army themselves with voice talents including Fred Armisen (Final Space, Portlandia), Beck Bennett (SNL), Conan O’Brien and, controlling everything from a smartphone touchscreen, is national treasure Olivia Colman, almost reprising her Queen Anne personality from The Favourite. But it’s Abbi Jacobson who steals the show as Katie Mitchell. She nails Katie’s goofy charm from the outset, showing more spark here than she sometimes has as Disenchantment’s Bean.

More admirable in its writing than the execution of the wit and slapstick, it also refuses to fall into the trap of becoming preachy about kids being online too much. That everyone can be tempted to their doom by the promise of free Wi-Fi is pretty funny, but that’s as far as it goes. It doesn’t berate kids for not spending time away from their devices or for not getting outside enough or for being YouTube junkies. It just accepts that this is a type of childhood that is currently experienced by millions. It even goes one step further in proving that this connected lifestyle is essential to Katie’s happiness. No-one where she lives gets her, but the people who watch her videos love her. It’s a movie that allows kids to have this new type of childhood without an outdated and hectoring “playing in the streets and making fun out of a stick and a rock” moral. That’s definitely something to be celebrated.

The Mitchells vs The Machines is presented in HD with an appropriately vibrant HDR to match Katie Mitchell’s intensely creative imagination. There’s also a pretty fun, action oriented Atmos track with a decent but not overdone low end, perfect for all the family-friendly robo-havoc.

It’s a movie like, yet unlike, any animation you’ve seen before. While the movie may not completely pull off all of its emotional beats – it’s unlikely to give you the Pixar Feels™ – its magnificent design work and its blend of whip-smart and slapstick humour makes it a family must-see with plenty of mileage for everyone.

The Mitchells vs The Machines is available to watch now as part of your Netflix subscription.