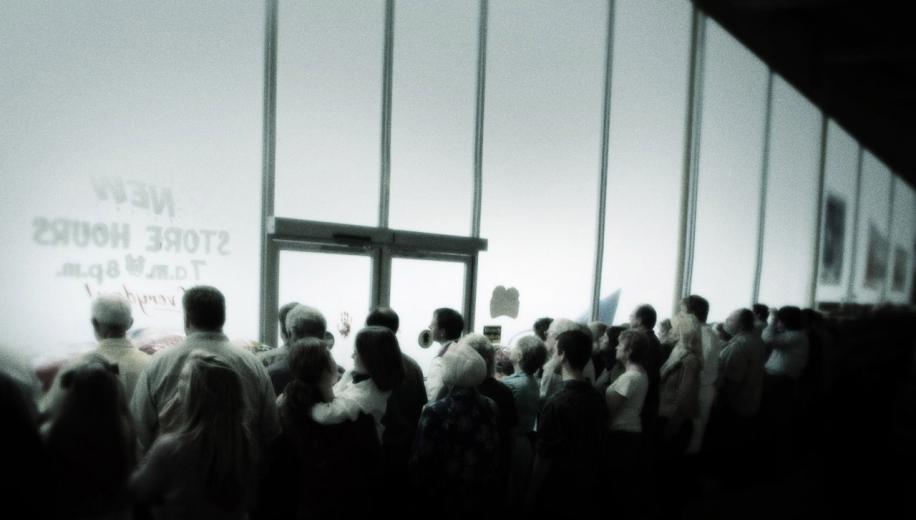 The Mist is presented in the theatrically correct 1.85 : 1 ratio, and is anamorphic. After the HD revolution of the last 18 months it can sometimes be rather difficult going back to SD - but The Mist excels on many levels.

The colour version is a very interesting beast indeed. I watched the film upscaled through a US PS3 and the level of detail for an SD transfer was revelatory. Admittedly, it can't hold a candle to the best Blu rays but this is certainly one of the best SD releases I have had the pleasure to watch.

Darabont uses some interesting colour choices, with some scenes being oversaturated whilst others are strangely muted. This is always a deliberate choice, however, and the transfer copes with the differences very well. The contrast is always extremely well balanced, and detail and shading is similarly well handled.

However, if the colour version is superb, then I don't have a suitable adjective for the black and white version. This is the preferred vision of the director, who would have liked to have released it in this version had it been commercially viable. The colour is (obviously) completely drained, but the mastering also seems slightly different.

The result is that the contrast in the image is even more sharply defined, and the atmosphere is brought into your living room in a more immediate way. The level of detail in the image is still excellent but seems somehow sharper and clearer in this version.

Whichever version you watch, you will not be disappointed - but for me the black and white version is slightly preferable. Both cuts are exactly the same. The sound on this disc is a very slightly disappointing Dolby Digital 5.1 mix. Whilst the soundtrack is generally well mixed, the track does rather tend to lack directionality.

The first thing to note is that the volume is well balanced throughout the film, and dialogue is always clean, precise, and easy to hear. The music is well balanced, and never overpowers the dialogue. Similarly, the effects are similarly well balanced.

Sadly, the sub rather lacks punch. Admittedly, there are few moments when its use would enhance the experience - but when these moments do appear it would be nice to really have the sub pushing out some serious bass. Sadly, whilst it is used the punch that is emitted is rather lacking.

What I find particularly interesting is the use of the surrounds. In the colour version they do seem rather muted, providing general background ambience but lacking true directionality. Strangely, the black and white version seems to have far more focus in this area. This is particularly noticeable during the final ten minutes of the film where in the b/w version helicopters and flamethrowers can be clearly heard circling the viewer. The colour version seems to lack this vibrancy, with the surround back sounding almost mono. I can find no reason for this whatsoever, but for the complete sound experience the black and white version narrowly edges it over the colour version After so many lacklustre HD offerings, it is refreshing to take a step back into the SD world and find a disc lavished with attention. The whole package is kicked off with a superb Commentary from Darabont. Anyone who has heard his previous commentaries will know that the director has a great sense of when to speak, and when to be quiet, when to focus on minutiae, and when to talk about the bigger picture. It is a shame that Stephen King doesn't make an appearance here, but this is truly an excellent commentary.

We then get some deleted scenes with optional commentary. As the film does rather drag in the middle, it is hard to argue with the decision to axe these scenes, but they are very well acted so it is fascinating to see them here.

The first disc is rounded off with Drew Struzan : A Portrait of an Artist - a fascinating portrayal of the famous poster artist, whose work is featured at the start of the film, three trailers and a selection of very interesting behind the scenes webisodes

On to the second disc then, and alongside the black and white version of the film we are presented with some even meatier extras than on the first disc. Darabont presents a three minute introduction to this version of the film, and then we get a fascinating 37 minute feature When Darkness Came : The Making of The Mist. This is a refreshingly in depth look at the making of the film, featuring comments from the actors, director, crew, and Stephen King himself. We get to see some fascinating behind the scenes shots and even aspects of the marketing of the film are discussed in some detail.

Even more detail is gone into during Taming the Beast : The Shooting of Scene 35, a deconstruction of one scene - the most ambitious in the film. I will say no more for fear of spoilers, but this is fascinating stuff. Finally, another 30 minutes is spent looking at the visual effects in two documentaries Monsters Among Us and The Horror of it all. The brilliant work of the creature designers is shown here both in terms of model making and in the CGI renditions of those models. Criminally denied a release in this country so far, The Mist is a fascinating film. Combining a B Movie feel with modern techniques works wonders and makes the movie feel almost timeless. Darabont's touch is as sure as ever, and he cleverly mixes the horror of the other worldly beasts that lurk in the mist with a more down to earth horror of the human psyche cracking under pressure.

Although there is currently no HD release planned, the DVD release is up there with the best on the format. The picture is astonishingly good when upscaled and the sound is also atmospheric and well designed. Add to this a comprehensive and consistent extras package and you have a disc that this excellent film deserves.

Of course, the British viewer has a choice here. Wait for the cinematic release or go for the DVD now. In the case of The Mist I feel that the home is actually the best place for the film. On the small screen, the claustrophobic atmosphere is enhanced and you also get the choice of the director's preferred version - the black and white version. This is the DVD release of the year so far for me.