Forget a bigger boat, we're gonna need a battleship for this shark! 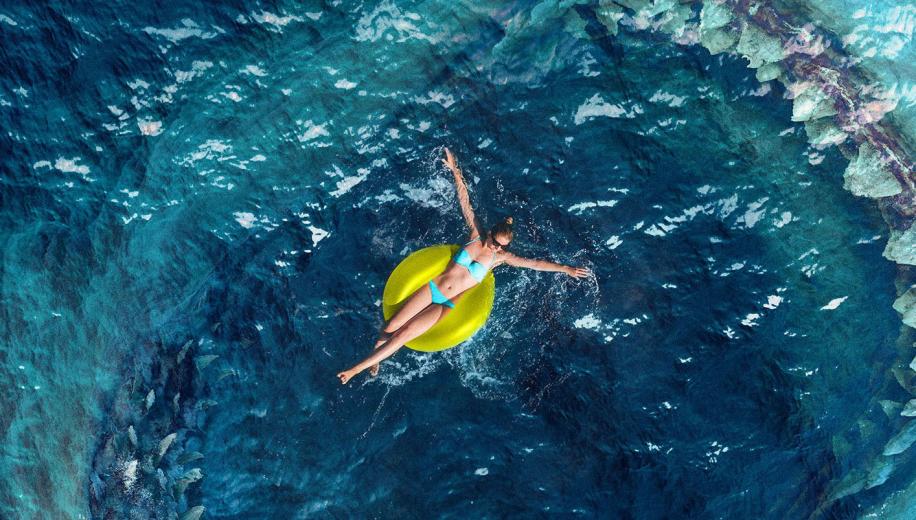 Throw your expectations out of the window and remember this is Jason Statham vs. a giant shark, and The Meg is a fun bit of rather, ironically, toothless frivolity.

Fans of the source novel - part of a series of books about marine biologist Jonas Taylor and his encounters with a giant 75-foot megaladon super-shark - probably won't be all that pleased with the treatment of the mega-jaws story, despite how ostensibly faithful it is in basic setup, because the material simply isn't suited to the restrictions of a PG-13 rating.

The premise is very similar: whilst on a mission, Jonas Taylor encounters something big and nasty in the depths of the ocean, sacrificing everything to make it out alive, and later being labelled as mad when he describes what he thinks he saw. Nonetheless, when a deep sea dive goes wrong, he gets called in to help with the rescue, and ends up having to deal with the very same beast: a thought-to-be-long-extinct mega-shark. However, the similarities with the book likely stop around there, largely due to one thing and one thing only: The Stath.


It feels like Jaws remade by committee, but once you accept that and view it more like Jurassic World, it does offer some super-sized fun.

There are certain expectations to a movie once you get Jason Statham involved, and despite the fact that he has himself gone on the record as saying that this is far from the bloody, brutal first cut that he envisioned, this is still every bit the kind of movie you would expect when you hear that The Stath is going toe-to-fin with a shark that could eat Jaws.

Yes, it's got an at-times frustrating Chinese contingent to appease investors and prospective audiences, but at least they try and tie-in the characters to the core plot for once (the love interest for Statham is a nice, unexpected, touch) rather than leave them extraneous and on the periphery. Yes, it has some glaring CG and green-screen work that seems utterly at odds with the rest of the feature - which largely looks stunning both under and above-water - but that's almost part of its hokey, big budget Sharknado charm. And yes, it barely has any truly satisfying kills that don't involve sea-life, but flip it around, and - as PG-13 prehistoric beast blockbusters go, this is still more straight-up fun than Jurassic World 2.

The trouble, as always, is that you wonder what they could have done with a little more leeway - the filmmakers clearly handcuffed to a Jaws-moulded (and not just the first Jaws, this one runs across the entire franchise plucking familiar ideas from almost all of them), production-studio-run, biggest-audience-possible feature, which was certainly not interested in taking risks. It often feels like Jaws remade in 2018 by committee, forgetting the kind of innovative tension-building mystery that Spielberg employed to create suspense, but also failing to deliver the kind of R-rated bloodletting that the less subtle approach demands. But, once you accept that and view it more like a spin-off from the Jurassic World franchise rather than a rip-off that makes Deep Blue Sea look like Jaws, it does offer some suitably super-sized fun.

The Meg was shot digitally at resolutions of up to 3.4K but technically limited in its full 4K potential by a 2K DI, leaving this a semi-skimmed upscale which has been used here for this Ultra HD Blu-ray release.


Despite being an upscale, The Meg is prime demo material.

Despite being an upscale, The Meg is prime demo material, afforded a thoroughly enthusiastic visual palette which is packed with eyeball popping neons and high contrast extravagance, delivering some wondrously retina-searing visuals which are a supreme showcase for the full showroom demo capabilities of the format.

Detail is excellent, revelling in every line and scrap of facial hair on Statham's face, the textures of the outfits, and the electronic light intricacies of the various high tech subs and rescue craft. The 'extreme' vibrance of the 4K image leaves finer nuances visibly improved here, with better resolved detailing than the Blu-ray can offer, despite the seemingly minimal increase in actual resolution.

It's not, however, all about resolution, is it? Not when you have HDR, WCG and - in this case - Dolby Vision at play, rendering some wondrous tones in their full spectrum glory; the colour subsampling unaffected by the upscale status, and thus affording a much bigger packet of colour information than the Blu-ray can possibly deliver, which is right up front on the screen for you to enjoy in all its vibrant glory. Neons pop with stunning intensity, but never white out (although the more obvious green-screen work comes dangerously close); black levels are supremely deep, but never crush out, and the image is often just sheer demo perfection - if you want to show off your equipment, that is. Hardly traditionally filmic (and the green-screen / CG work is glaringly obvious), this one's going to impress lovers of eye-waveringly bright, clean visuals and, in that respect, it reigns supreme.

The accompanying soundtrack is a stunning example of full HD 3D immersive audio in the form of Dolby Atmos, drawing you right into the punishing, pressurised underwater world of the megalodon right from the outset. LFE is key, rumbling underfoot frequently - normally as a sign of the encroaching super-shark, and the track is an intoxicating mix of epic open water threat.


A superb example of the best the format has to offer.

The first act's deep sea moments are arguably its highlights, aurally, just due to that LFE rumble, but there's plenty of exciting soundstage activity during the later extended action sequences, from the Jaws-esque hunt to the shark-packed cage-dive right through to the over-the-top finale. Aliens-esque motion beeps warn of proximity, boats groan and moan under pressure from the beast, and impacts hit home like your living room walls are being caved in. The track has nuance too, allowing bubbles of oxygen to percolate up all around, and shoals of smaller fish to dissipate above your head. It's a fabulously designed immersive audio track and a superb example of the best the format has to offer.

Nothing on the 4K disc, and nothing substantial on the Blu-ray; just a couple of EPK Featurettes.

It would be really easy to award The Meg a higher score just for brainless entertainment, but the trouble is that it is hard to forgive that fact that almost every scene in the movie is taken from another, better, movie before it, and that the filmmakers here really haven't tried to do anything in the least bit interesting beyond show off a rather impressively large shark.

You could argue that if you haven't seen The Abyss, or Jaws, or basically any other movie that involves water, this would probably be jaw-droppingly, amazingly fresh entertainment, but the reality is that the only way it works is if you accept that this is filmmaking-by-committee, PG-13 nonsense and that it's not going to be anything more or less than what it says on the tin: The Stath going up against a giant shark. Once you've swallowed that bitter pill, there is some manner of fun to be had.


Fans with suitably bottomed-out expectations might find some pleasure in this unsurprisingly silly Stath-vs-shark blockbuster.

No reservations or dropped expectations or the like for the 4K release - other than perhaps the warning that this is undoubtedly the brightest 4K presentation of the year, or perhaps even of the entire format - which boasts an eye-searingly vibrant picture and superbly immersive audio, as well as some chum for extras, rounding out a demo package which arguably makes the movie even more throwaway fun from the comfort of your couch (it's easy to see why this would have disappointed at the cinemas, for the same reason as it's much more tolerable at home).

Fans shouldn't hesitate in picking it up; fans of Jaws should consider themselves forewarned but, by the same token, with suitably bottomed-out expectations, they might still find some popcorn pleasure in this (really quite unsurprisingly) silly Stath-vs-shark blockbuster.