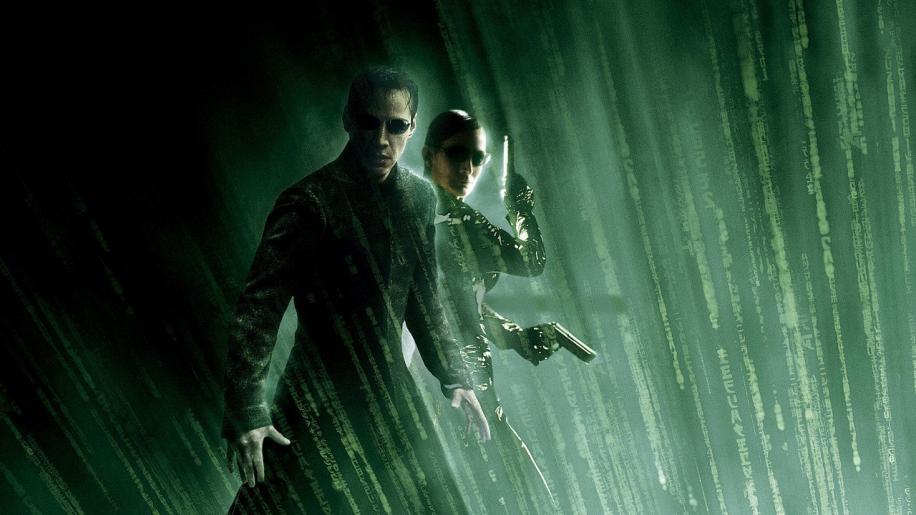 Presented in anamorphic 2.40:1 the print and transfer found here is very nearly reference quality. Detail and sharpness are exemplary with the image never looking soft apart from very wide shots. Small detail in the various sets can be picked out easily and close ups on faces look stunning with every line and pore visible. The green tone from previous outings is still present during the Matrix scenes with the real world taking on more earthy colours which look very good.

A few niggles with edge enhancement seen briefly along with some slight compression artefacts does not take anything away from this outstanding effort from Warner's disc encoders with the print looking very filmic with great colours thrown in to the mix. Overall the disc has a real blockbuster feel and the print looks flawless, top marks.

As with all Warner product we get Dolby Digital 5.1 soundtracks in English and French, no sign of DTS and in all likely hood we will never see these films on disc with that option, unless the studio has a change of heart.

What we do have is a very active soundfield which uses all five speakers and the LFE channel to full action movie standards. However you will have to turn it up a little. Like Reloaded the soundtrack is at least 4db too low on the volume front, but playing at reference levels everything sounds well balanced with maybe the LFE channel slightly too hot at times. Dialogue is crystal clear and intelligible throughout with the surrounds used constantly whether it's ambient clicks and background noise to full on machine gun fire, you will not be overly disappointed with the sound mix on offer, just remember to turn it up a little bit more than usual.

Presented as a two disc edition my first thoughts are that we will get a super duper trilogy pack next year with all the best extras. I say that because what we have here is quite poor really. A bit like comparing the LOTR standard releases with the Extended Editions, you just know they have hours and hours of extras waiting for future releases.

So what's on offer then? On disc 1 we have four trailers and Weblinks but no commentary tracks. Moving onto disc two we get a making of feature(Recalibrated) which is a promotional feature with interviews with cast and crew and some behind the scenes footage. CG Revolution looks in some detail at the massive amount of CGI work involved with the production including interviews and clips. Moving on and the Super Burly Brawl feature is a multi angle look at storyboards CG and the finished article for the last big action scene. Next up is a look at the online game with interviews and clips and before the revolution is a series of text screens providing all the back story to the Matrix franchise. Finally we have 3D evolutions looking at Art gallies and storyboards, small featurettes: "Neo Realism", "Super Big Mini Models", "Double Agent Smith" and "Mind Over Matter" and weblinks rounds it all off.

A big budget film trilogy which will divide opinions for years to come, revolutions may be flawed, but offers some interesting action and suspense and closes this chapter in the Matrix franchise. The disc offers excellent visuals along with good sound and a handful of extras. What's the bet on a super duper version being released sooner or later though?