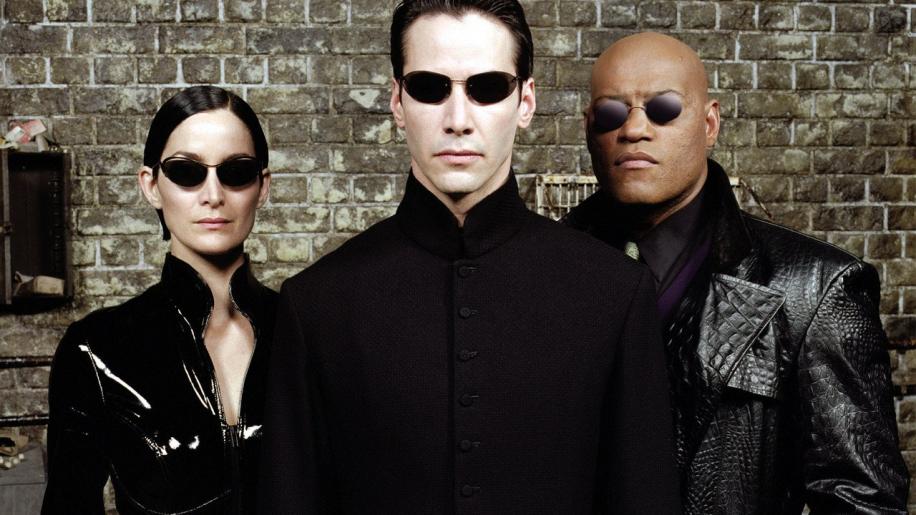 With this two disc set the movie is the only thing to be found on disc one and this is good news. The 2.35:1 transfer looks very good indeed given the difficult images needing encoding. Much of the movie is set in darkness or green tinged when inside the matrix, but the disc manages to produce these scenes without breaking into a sweat. There are no signs of edge enhancement, even when I was really looking out for it I just couldn't find any, excellent stuff indeed.

During the darker scenes the print again holds up well with plenty of shadow detail on show and nice inky blacks being reproduced perfectly. Colours also look natural and well saturated with no signs of blooming or bleed. Close ups on faces also look very good with plenty of details such as lines and pores being visible and flesh tones look natural.

Overall Warner have done a sterling job with this movie and it is very nearly reference quality with only a few niggles such as a softness during wider shots stopping this reaching top marks. The layer change at 1h20m28s is hardly noticeable and does not take place during an action scene.

The first thing that struck me regarding this Dolby Digital 5.1 (448kbps) soundtrack was the overall subtleness. In fact I found myself running this movie at -5db in my review room (usually -10db is enough). This doesn't mean this soundtrack is bad in anyway, it just lacks the wideness and overall clarity I am used to with such action based movies and if you have THX processing switch this off. The front channels while detailed do not have that wide immersive feel about them; they were more focussed towards the centre channel. But what does stand out is the small nuances present in the mix.

Right at the start of the picture we see Trinity jump from a building followed by an agent (2m56s). As trinity falls she is firing an automatic weapon at the following agent, all of this in slow-motion with everything slowed down. The sound of the guns firing creates a real thud from the LFE channel with falling glass surrounding us in the rear channels. The bullets being fired also pass over us left and right to great effect before the scene ends in a huge Thud as the bodies hit the ground, and Neo wakes up to absolute silence. Then as he gets his bearings the background sound of the ship begins to come back again creating an ambient feel. What an impressive start and it just gets better as we progress through the movie, but at no time does this soundtrack appear to be anything but subtle, washing over you without punching your lights out or making itself so obvious you are drawn away from the screen.

Again I couldn't help being impressed by the use of effects steering during a fight sequence in a large hall of a house (1h16m37s). The bad guys line up and Neo states, “I'll handle them” and the machine guns open up across the front soundstage changing pitch as the camera angles switch. Once out of ammo the bad guys rush Neo and all hell breaks loose. The sound of swords whooshing over the soundstage as well as hand to hand combat, back flips and a heavy dance tune get the pulse rate flowing and it sounds sublime. How many dealers will be using this scene to demo their home cinema equipment? Well actually I think they will be using “The Freeway is suicide” chapter (1h24m49s) which is one of the most complex car chases ever seen or heard. The sound mix is just sheer reference quality mixing with all 5 (or 7) speakers coming alive with vehicle noises and another heavy dance track backing everything up. The LFE used as we travel through 18 wheeler trucks following Trinity the wrong way up the freeway is awesome, moving some serious amounts of air. The sheer complexity of the effects and music tracks just leaves you with a huge grin on your face; this is serious Home Cinema fun.

Overall the mix is first class but may surprise a few with its overall subtle approach and the fact it doesn't beat you about the head, but this is reference quality sound mixing and the car chase is worth the purchase price alone.

We all know there is another film to come this year and that early next year we will no doubt get some kind of trilogy boxset, so I'm not surprised at the lack of depth in the extras here. First up is the featurette “Preload” which takes a look behind the scenes, but the feature tends to just gloss over the main points without going into anything in great detail. The matrix unfolds covers all the various spins offs for the movie such as the Animatrix and the computer games as well as the films, this is nothing more than an electronic press kit feature. The freeway feature is worth watching and does go into some detail about how the stunts were put together and filmed and is the most useful extra present in this set. Moving on is an interesting feature called “Get me An Exit” which covers the assistant director for the Matrix films as he describes the various tie ins with manufacturers Samsung for mobile phones and an energy drink ad campaign based on the films. There is a trailer for the video game and web links which can be skipped over as well as a 6 minute trailer for the Animatrix.

Finally we get the MTV Movie Awards reloaded. If you have ever seen the MTV awards you will know that they usually pick on the big movie of the year and have the host(s) cut into the films footage. This one is 6 minutes of Seann William Scott and Justin Timberlake in reloaded and is surprisingly very funny indeed, I have actually watched it a couple of times now and still find it amusing.

The movie is good but could have been better paced and the disc offers excellent picture and sound and some interesting extras.