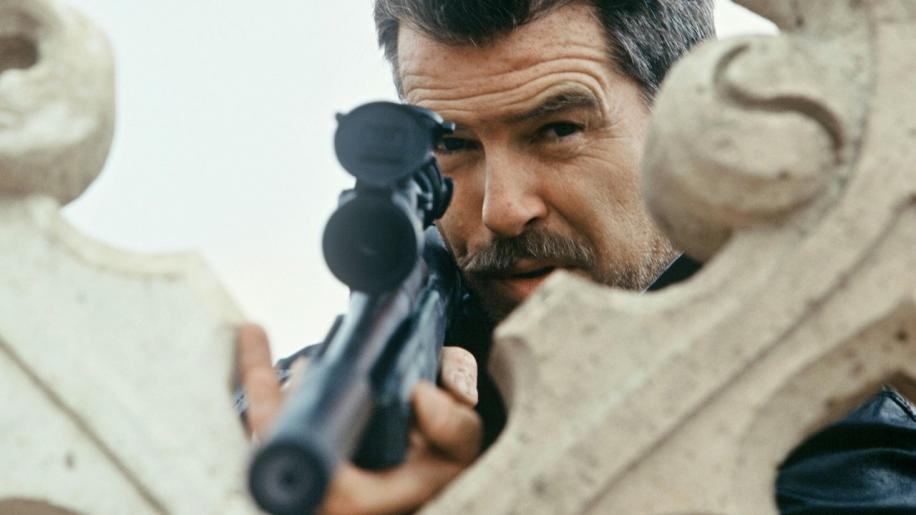 Matador is presented with a solid 2.35:1 aspect ratio anamorphically enhanced widescreen transfer. The picture is crystal-clear, with decent detail, negligible grain, no signs of edge enhancement and no digital artefacting. The colour scheme is broad and quite varied, from the sunnier locales to the wintry settings, with every colour well represented, up to and including the solid blacks that provide for decent shadowing (check out the car scene towards the end for proof of that). Overall it is a fabulous effort that does justice to Shepard's keen eye as a director.

We get a solid Dolby Digital 5.1 soundtrack to accompany this piece. The dialogue is presented clearly and coherently, predominantly through the frontal array. There are plenty of effects, from explosions, to gunshots, to even trees crashing to the ground, all given room to thunder in your living room through good use of the surrounds. The more mundane noises like washing machines also get decent representation. The soundtrack varies quite dramatically, but perfectly suits the material and we even get a little bass through into the mix.

For this release we get not one but two Audio Commentaries. The first is with the Director Richard Shepard and, as you might expect, it is quite a dry offering. Although this guy clearly knows his business, there are only a certain number of location details and shooting techniques that you can stomach and, after a while you switch off. The second offering is sees the Director paired up with the two leads, Pierce Brosnan and Greg Kinnear for a much livelier track. Although not nearly as informative, Brosnan is simply a joy to listen to and the anecdotes and wisecracks from the trio make for much more interesting listening.

Making the Matador is a brief Featurette, mostly promotional in content - you can tell from all of the interview soundbites and final film footage that pepper it. Not that this movie needed a particularly deep making-of documentary, but this kind of advertising fluff is just irritating.

We also get a substantial amount of Deleted Footage. The eleven offerings (some completely new, some merely extensions of existing scenes) come with optional Audio Commentary by the Director, who explains why they were cut - largely for pacing reasons. Many of them include more from Brosnan, which will interest fans of the actor and the movie, and there is an gratuitous extension to the scene where Julian visits a fetishist parlour, but it is understandable why they were not kept in (apart from perhaps the interesting fantasy moment where Julian is ranting, covered in blood).

The Business & The Treatment: Feature Radio Programs Discuss The Matador is a rather odd extra. It is exactly what it states on the cover - a radio program devoted to discussion of this movie, featuring contributions from the Director. Whilst this could be regarded as another Commentary, the radio format does not fare well on DVD. Finally we get the Teaser and Theatrical Trailers, along with several movie Previews on disc startup: Transamerica, Hoodwinked (which looks hilarious), Mrs Henderson Presents and The Libertine.

The Matador is a quirky little character-driven movie, with an excellent performance by Brosnan, some interesting ideas and some very black humour. It will certainly not be to everybody's tastes, but those who do 'get it' will like it a lot. Unfortunately it is one of those love it or hate it movies. This release has superior video and a decent audio track to boot, with a wealth of extras, some of which are actually worth your time. Overall, if you enjoy it on rental then this would definitely be a decent addition to your collection.