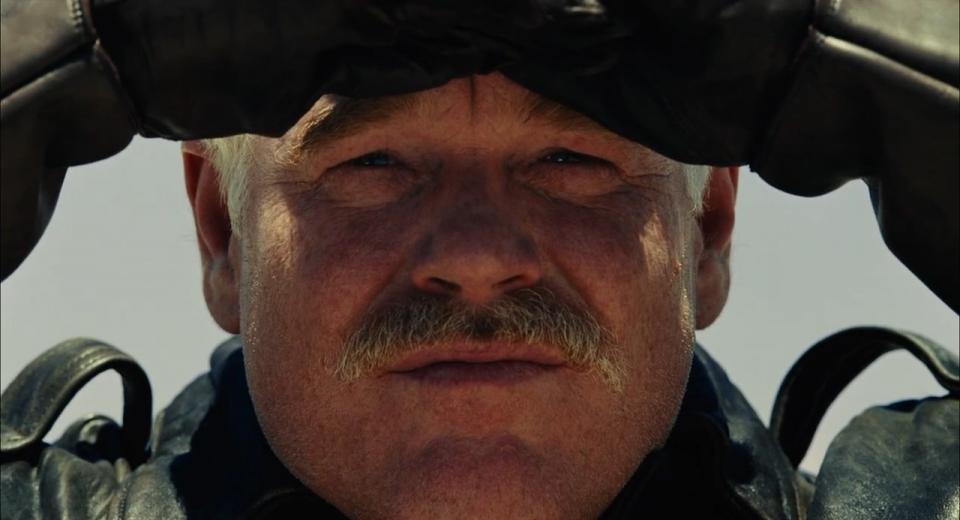 The Master comes to Region B-locked UK Blu-ray with a stunning, flawless 1080p High Definition video presentation in the movie’s original theatrical aspect ratio of 1.85:1 widescreen. Rather adventurously shot in the now-extremely rare 65mm format – which produces a stunning level of detail and staggeringly high resolution – it really is no surprise that The Master looks this amazing. Since it largely avoids Anderson’s trademark panoramas in favour of fuller-screen facial close-ups – to heighten the intensity – the impressive detail is more easily recognised in the skin textures, facial hair, beads of sweat and clothing textures. Fine object detail is unparalleled. That’s not to say that we don’t get some tremendous wider shots – we do – and they offer up beautiful, sumptuous scenery.

The colour scheme has obviously been dipped in favour of a slightly more stylised palette, enhancing the period feel, although still allowing for some wonderful tones, vivid and vibrant, right up to and including the stunning black levels which offer up superb shadow detail. There are absolutely no defects that can be seen on this image: no scratches, dust, dirt or other anomalies (and, of course, no digital defects as there was no digital intermediary used). The grain level is wonderfully understated, adding a filmic sheen to the proceedings without impinging upon the fantastic clarity. Seriously, this is unparalleled perfection, a superior image for superior cinematography. Demo quality, reference standard and just about one of the best-looking Blu-rays you will ever come across. The accompanying DTS-HD Master Audio 5.1 track, whilst it generally offers a solid representation of the score, is let down ever so fractionally by a marginally less immersive soundscape than you would have hoped for given the pedigree. Perhaps it’s the understated nature of this piece – it was never going to hit you with the same punishing intensity as There Will Be Blood – but it never quite achieves the same level of all-engulfing presence, despite boasting accurate sound design and authentic observation. Dialogue gets keen presentation across the fronts and centre channels, but it often plays second fiddle to the more ambient, atmospheric aural elements, that are entirely natural and based on the environmental sounds and effects on offer. Motorbike engines roar, heels slap loudly on polished floors, and even the crackle of cigarettes being smoked can be heard due to the precision. Still, it can’t quite be regarded as demo quality material, even if it sometimes comes close, often even achieving that powerful presence you would only expect from an Anderson feature. Aside from the fantastic video and solid audio we get exactly the same set of worthy, interesting extras that adorn the US release.

Back Beyond compiles a series of additional scenes and outtakes into a 20 minute short film, pieced together very cleverly and set to music composed by Radiohead’s Jonny Greenwood (the guy who did the main score for this and Anderson’s last feature, There Will Be Blood). Presented in 1080p High Definition, in the same 1.85:1 format as the movie, it is a fantastic, unique way to present Deleted Footage and is well worth checking out.

Offering up some nine Teaser and Theatrical Trailers we get a further 17 minutes of promo clips, many of which vary quite significantly in what angle they take to promote the movie.

Unguided Message presents us with an 8-minute compilation of behind the scenes footage which doesn’t offer any direct insight into the story, but reveals a fair amount about the production shoot itself.

Let There Be Light is an hour-long Documentary by filmmaker John Huston, produced in 1946 and looking specifically at recovering veterans from World War II, with clips of the actual recorded hypnotherapy sessions that many underwent to assist them in the recovery process. Apparently Anderson took inspiration from this Documentary in the PTSD aspects of the production, as well as the ‘processing’ sessions seen in the movie, which also parallel the auditing sessions conducted by Scientology practitioners. The Master is a film that says a great deal, although nothing actually overtly happens. On the face of it, it is a tale about an alcoholic World War II veteran who gets drawn to the enigmatic leader of what appears to be a religious cult; a group who are driven not by a fixed set of ideals, but by what feels to be an ever-changing plateau, the construction of which is dictated entirely by the whimsy of the omnipotent ‘Master’. Below the surface, however, is a study of the whims of Scientology, thinly veiled beneath the PTSD premise, and clinically examined in a suitably opaque, oblique fashion by acclaimed director Paul Thomas Anderson. Although not quite as unendingly intense as his masterpiece, There Will Be Blood, it is arguably just as effective at getting to the heart of its subject-matter, and is similarly driven by standout performances – not just, as expected, from Philip Seymour Hoffman, but also by Joaquin Phoenix, who pulls out all the stops and thoroughly deserves his Best Actor nod.

On Region B-locked UK Blu-ray we get stunning video presentation and solid aural accompaniment – seriously this is probably one of the best-looking movies that you’ve ever seen – as well as an interesting selection of intriguing extras. Fans will find this a must-have purchase, and newcomers should test the waters with a rental, although this is the kind of film where a purchase will probably easier facilitate the multiple-watches required for this piece to be fully absorbed. Recommended.