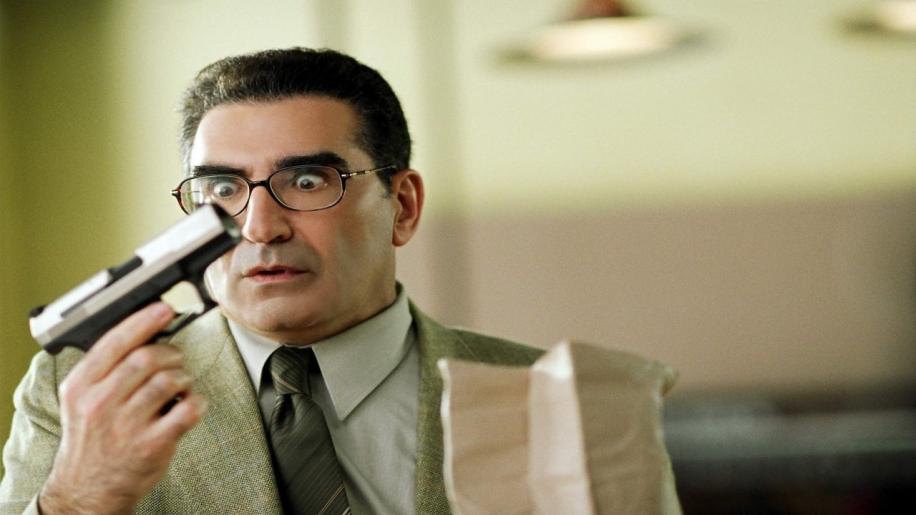 Despite a relatively low bitrate of 5.82 Mbps, this is a mostly impressive picture. Colours are vivid, even and solid throughout, with blacks full and skin tones natural. Likewise, the image is pleasingly crisp and detailed. The fact that this is a new release means that there are no problems with damaged/dirty print quality or the grain problems that occasionally afflict older movies. The only downsides here are the occasional noticeable use of edge enhancement, and some atifiacing present in background shots. The results are similarly impressive in the audio department, with this solid DTS track. Dialogue is clear at all times and very nicely balanced in the mix. Front speakers are rich and powerful, while the rears are given a solid workout throughout, with soundtrack music especially coming across wonderfully through the surround. Action scenes are competently realised with a nice contribution from the LFE channel. The 5.1 track also impresses, with only a slight drop off in clarity and precision from the superior DTS mix. 'The Man' arrives on DVD with a pretty lacklustre collection of supplemental features. Much like the movie itself, this isn't a particular bad example of extra features, but it's far from a good one. First up is a selection of five deleted scenes, three of which are more like alternate edits that offer slight variations on the scenes we see in the final cut. Only two scenes are actively different or extended. Both of these feature some more of the endlessly watchable Levy and are nice distractions. These are very short additions however, and all five scenes won't add up to any more than ten minutes of varied footage. Next is a selection of bloopers/outtakes that last barely a few minutes. There is nothing of note here, with this collection being comprised of people fluffing their lines in a very professional way, with little entertainment value for the viewer. Following this is a collection of four featurettes all within the 5-10min mark in length. 'Sam Jackon's Guide to Being a Bad Ass Mothaf&#@*' is an entirely pointless look at Vann's use of street speak, while 'The Ride: a Look at the '83 Cadillac' plays like an episode of MTV's 'Pimp My Ride'. 'Who's the Man?' is a promo featurette and as such offers little beyond the usual promotional bumf associated with these ventures, with cast and crew offering fairly unengaging titbits of trivia indispersed with clips from the movie. Finally we have 'Making an Action Scene', which shows some behind-the-scenes footage on the construction of the warehouse shootout, and may be of interest to SFX fans. Rounding off the extras is the ever present theatrical trailer. Overall a disappointing and wholly average collection of supplements here. A mediocre movie brought to life by the sheer bizarreness of its inception two decades too late. Samuel L. Jackson and Eugene Levy are excellent despite the obvious limitations of the film and help elevate the movie from turkey to intriguing failure.