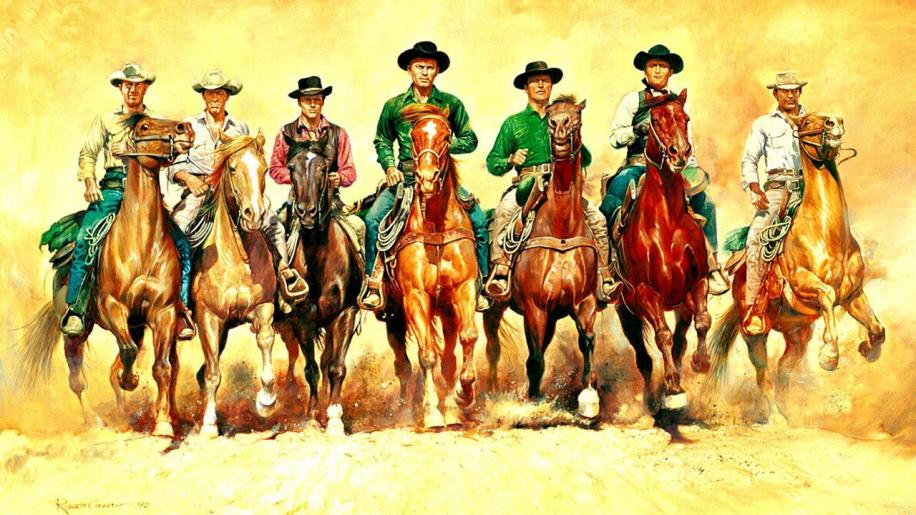 I suppose a “come clean” moment is required here... I haven't seen The Seven Samurai upon which this Western is based. Having said that, my understanding is that Samurai itself had been influenced by old western movies, so perhaps I'm not at much of a disadvantage. Anyway, now I've “cleansed my soul” to all and sundry onto The Magnificent Seven: The Ultimate Edition.

As with most classic movies the story here is a simple one - a community of Mexican farmers are being taken advantage of by bandit leader Calvera (Eli Wallach) and his forty strong clave of thieves, murderers and all round evil doers. When the farmers have enough of being left with only morsels of food after months of toil and graft, they seek the help for gunslingers for hire. Enter Chris (Yul Brynner) who takes pity on their plight and vows to help recruit the men needed to rid the farmer's village of the bandits. And so the next forty-five minutes or so (for me the best forty five minutes) of the movie is laid down, with first Vin (Steve McQueen) joining up, followed by Chico (Horst Buchholz), O'Reilly (Charles Bronson, Lee (Robert Vaughn), Harry Luck (Brad Dexter) and Britt (James Coburn). Although often simplistic in nature, each of the gunslingers have their own individual characters. Brynner plays the enigmatic leader of the group, with a serious tone partnered with an ever-ready smirk of fun simmering beneath the surface. McQueen is the undoubted star here, with a screen presence that simply steals most scenes. James Coburn and Charles Bronson do their best to play things straight, but their on screen characters have little to do and often get lost amongst what is, ultimately the Brynner/McQueen show. The same is true for the rest of our “heroes” - Robert Vaughn and Brad Dexter play fill in parts - almost simply there to make up the numbers - which leaves a youthful Horst Buchholz to play a native Mexican... despite appearing eminently German to me!

With our vigilantes gathered it's time to head to the farmer's village, and for me it's at this point that the movie takes a little dip towards mediocrity... gradually becoming ever sillier until the rather unfulfilling final showdown. But this movie is all about the seven leads, and with McQueen and Brynner ruling the roost, partnered with Elmer Bernstein's terrifically catchy theme music, The Magnificent Seven squarely hits the mark.