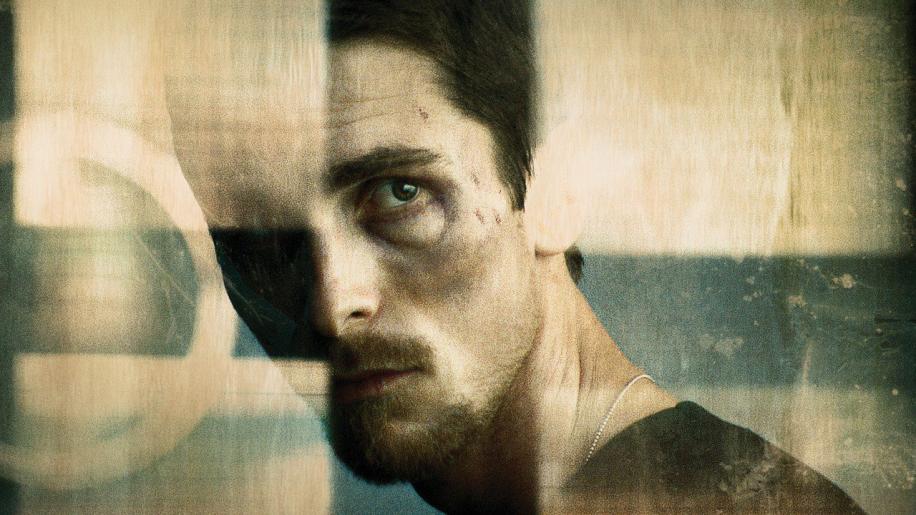 This is a tremendous transfer indeed. Coming in with a terrific 2.35:1 anamorphic image, Paramount's disc looks amazing. Perfectly capturing the bleached-out effect of Trevor's colour-drained and sterile world, the disc handles the high degree of contrast changes with ease, much of the film shimmering a cool, clinical blue that reveals the stark detachment of its main character. Transitions between the two extremes of contrast are impeccably staged, too. Skin-tones are necessarily pallid and drawn, but wholly convincing, all the same. Trevor's parchment-like flesh is almost translucent, his harrowing visage so clearly chiselled that it seems to poke out of the screen. Only the funfair is allowed anything bright and colourful, and even when colour does intrude elsewhere in the film - Ivan's red Pontiac Firebird for example - it seems bludgeoned by the coldness that surrounds it.

The black levels are some of the best I have seen. Incredibly rich and deep, they create a wealth of atmosphere within even the most minimal of scenes. Check out any of moment of Trevor creeping about his apartment and, best of all, just look at the awesome depth and intricate shadow-play they bestow upon the machine-shop. Wonderfully evocative. The level of detail on display is staggering too. Again, the machine-shop scoops the first prize here - look at the gleam of the equipment, the grease, the metal shavings and the tiny wisps of steam.

Obviously, there is no hint of grain in this completely meticulously clean and sharp print. With only minimal edge-enhancement and no artefacts or blocking within the vast depths of black, this is textbook stuff. A sterling transfer, indeed.

Offering us a choice between a Dolby Digital 2.0 mix and a fuller, more robust 5.1 option, The Machinist does a great job of unsettling the viewer with either track. But, of course, the 5.1 is the one to go for. Constantly clear and driving, the rising tempo of the dialogue is always well-maintained and steered. The powerhouse score forms a lattice-work of aural menace that floats about the room, adding a spectral quality that the sound design fully embraces. The rears are utilised often but never to any great level of bombast. Predominantly reserved for ambience, they lash out only occasionally with a nicely directed voice or knock at the door. That said though, listen out for the terrific humming and throbbing of the machinery in Trevor's workplace that literally turns your living room in an industrial shop floor.

Serving predominantly from up-front, the soundscape is still hard to fault. But, it may be worth waiting for the R2 release, which comes equipped with a DTS track.

Brad Anderson's Commentary Track may sound a little dry, and his voice slightly disinterested, but there is actually a wealth of information doled out. He is thoughtful and quite honest and, thankfully, fairly scene-specific. He details the differences and difficulties encountered with filming in Spain and is quick to point out that he didn't actually ask Bale to lose that much weight - a whopping third of his bodyweight! Apparently, Bale says that he reached a Zen-like state of euphoria through his starved and weakened condition. Don't try this at home though, folks! Anderson is also fairly open about the Hitchcock references and the fact that some people can actually second-guess Trevor and get ahead of him in the detective stakes. It's also kind of cool the way he indicates the little clues sprinkled about the movie and just how cleverly integrated into the plot they are. Great chat track, but it would have been better, perhaps, if he'd had a cast member, or even the writer to spar with.

We get eight Deleted Scenes which, in all honesty, offer very little beyond a couple of superfluous moments and some alternate takes. Anderson provides a commentary over two, explaining that one was cut for pace and the other (which is actually an extended version of an already deleted scene) would have thrown up too many awkward questions instead of answering any. Nice to have, then, but not really adding much.

The 25.00 mins making of, entitled The Machinist - Breaking The Rules is quite good value, though. We get to meet all the major players from Bale, Ironside, Leigh and Gijon to Anderson, Kosar and the Spanish producers - who are quite hilariously subtitled by the Spanish documentary-makers. Amongst the copious behind-the-scenes footage we are treated to some great anecdotes, observations and some startling admissions - Bale claiming that it “Feels like victory just destroying myself.” Sheesh! That, in trying to convince us that Spain was really America they actually ended up filming in the worst parts of Barcelona, is neatly ironic. Great insight is given into the writer's and the director's themes and intentions, and that old Hitchcock gets a mention or two, as well. Great little featurette, overall, but it is worth noting that the R2 has a UK exclusive interview with Anderson, too.

There's also the Theatrical Trailer and previews for Mean Creek and Enduring Love.

The Machinist is a wonderful film, directed with cool precision and firmly anchored by a nerve-twitch performance from an actor at the top of his game. Christian Bale always gives 110 % (though probably a lot more here) and simply excels this time around. Despite his shrunken form, there is an immense depth to his characterisation, the harrowing destruction of his mind proving far more shocking than the physical wasting shown visually. The complex scenario plays out with a cerebral dexterity that mimics the fragmenting of poor Trevor's mind, and the journey that we, and he, undertake may be uncomfortable and unsettling but is still, ultimately, a deeply rewarding experience.

I know that some people take exception to high scores being dished out (this would have gained a 10 from me if they'd found a way around the chase and the sewer sequences), but The Machinist, in my opinion ranks as one of the best psychological thrillers ever made, and thoroughly deserves its score here for all of the reasons I have mentioned throughout the review. It is immediate, engrossing and thought-provoking, its themes taking root within you and then sitting there, ticking like a time-bomb. Although dealing with disturbing issues, the viewer never feels alienated or bound-over to form an opinion - Trevor is no more, or less, flawed than any of us. It is a nightmare and a tragedy, yet it bubbles with energy, sucking you into its warped mystery with stylish ease. Cult classic is stamped all over it and the film is definitely worth re-visiting time, and again.

Paramount's disc has a picture to die for, very good sound and a reasonable clutch of extras, but I would maybe suggest holding out for the R2, for the added DTS and the exclusive interview, though. But, without a doubt, it is the film that matters the most.