Spielberg knows how to wring emotion out of a scene 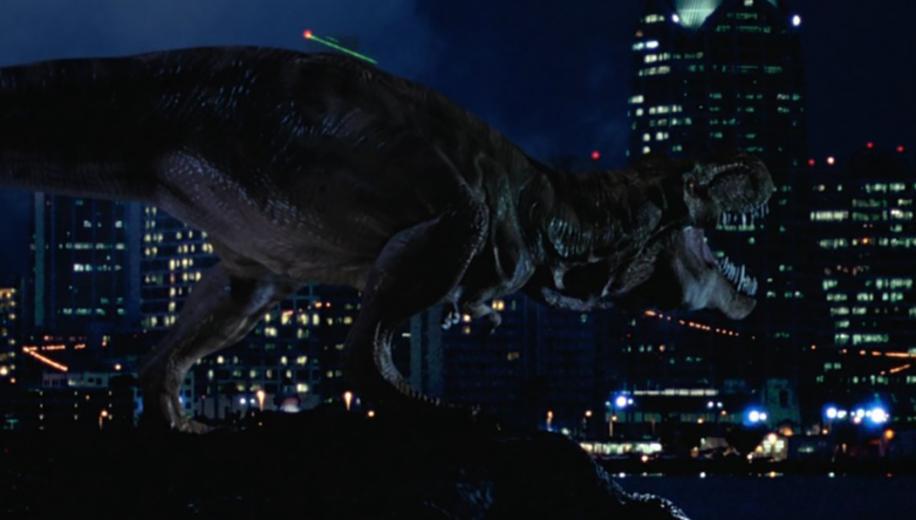 OK, so there is another island of dinosaurs, no fences this time and you wanna send people in, very few people, on the ground? Right?

With the huge success of Jurassic Park it was inevitable that a sequel would be forthcoming, and in four years, with Spielberg reuniting many of the original cast and crew, The Lost World came to be. Once again based on Crichton’s novel of the same name, the story follows much the same path; dinosaurs menace humans, but this time around instead of a simple family action adventure, there were some message within the subtext. Nothing unusual for films, of course, especially with Spielberg, himself, and luckily not laid on to heavily (just); human interference with nature, hunting is bad, ecology and conservation are a few of the ideas that have their part to play in the narrative.
All this doesn’t get in the way of the adventure, though, indeed there is far more going on this time around; sets are bigger, there are more dinosaurs (two Tyrannosaurs!) the scope is wider and the stakes higher. Indeed you could argue that Spielberg goes a wee but over the top by piling on the jeopardy, even when it goes all ‘King Kong’ at the end. There is still much to admire though, characters are well thought out, their motivations clear and there is emotion, entertainment and enjoyment, and it contains many Spielbergian moments; say what you will, he knows how to wring emotion out of a scene! The Lost World: Jurassic Park was shot using Panavision Panaflex Platinum cameras on 35mm film, and has been recently scanned to a 4K DI, with the obvious caveat that the effects are always going to be limited, and it is this that has been used here for the Ultra HD Blu-ray. The disc presents a native 3840 x 2160p resolution image in the widescreen 1.85:1 aspect ratio, and uses 10-bit video depth, a Wider Colour Gamut (WCG), High Dynamic Range, and is encoded using the HEVC (H.265) codec HDR10. We reviewed the Region free UK Ultra HD Blu-ray release of The Lost World Jurassic Park on a Panasonic 65DX902B Ultra HD 4K TV with a Panasonic DMP-UB400 Ultra HD Blu-ray player.


Definite improvement with the new scan


Detail on this new scan has definitely been improved by the new resolution, skin texture highlights every pore, hair and wrinkle (check out Pete Postlethwaite's mug!) while clothing clearly has tight weaves. But more than that the edges of the leaves are slightly cleaner, instrumentation panels are tighter and landscape shots look even more beautiful. This is helped immensely by the addition of WCG and HDR; colours contain so much more depth, Kelly’s clothes in the beginning show shades of pink not available to the Blu-ray, the greens of the jungle are so much more alive while the blues of the sky are so very natural. The black level is wonderful, there is so much going on in the shadows and it really adds significant depth to the image. But it is with the white end that things really shine; the light reflections in the corridor of Hammond’s house in the beginning, the San Diego skyline, the torches piercing the gloom or the cresting waves. Fantastic stuff.

The source is clear of any issues and holds a nice layer of grain, this is quite heavy in the first scene, and perhaps crawls a bit in the grey sky, but it soon clears up once the film gets going. Digitally there is nothing to worry about. The DTS:X surround track is an exhausting experience. Right from the off the immersive track takes hold; the waves crashing on the beach, the dinosaur critters as they chatter around the little girl and their attack is quite frightening in its realistic nature. Once in the compound putting together the various trucks and equipment for the expedition, there is a tangible sense of being in a mechanics' yard; the welding, hammering and auxiliary sound places you with the workman’s tools. And on the island things really hot up, all the jungle noise, the moment of the dinosaurs, the wind and the rain. Then there are the action scenes; the dinosaur hunt, the Tyrannosaur attack, the release and escape of the captured creatures and the ‘raptor attack in the grass – all these, and more, showcase dimensional layering. The falling truck with our heroes hanging on to the rope is a glorious delight. Dialogue is clear and precise given plenty of directionality when needed. The bass, like the original, is immense – tight, deep and subterranean when needed; the Tyrannosaur approaching is, obviously, the prime example. The score makes full use of the available speakers and surround scape also. An effects extravaganza. There are no extras on the UHD disc, all are housed on the included Blu-ray and all have been previously available.
Return to Jurassic Park: Finding The Lost World and Something Survived – A reasonable making of documentary that covers most everything you want to know, runs for about 50 minutes.
Deleted Scenes
Archival Featurettes – Houses some 80 minutes of featurettes titled: Making of The Lost World, Original Featurette, Jurassic Park Phenomenon and The Compie Dance Number
Behind the Scenes – More archive features running about 20 minutes, titled: Before and After Visual Effects, Story Boards and Production Archives
Trailer
BD Live The Lost World is Spielberg’s follow up to the incredibly successful, Jurassic Park. It is bigger in scope, design, peril, characters and dinosaur count. The action adventure does contain some conservation messages, but these do not distract from the overall enjoyment of the piece.

The 4K UHD package from Universal is pretty good, the native 4K image is a nice step up in terms of detail, but is a stand out with the colour and dynamic range both of which contribute to a terrific picture. The DTS:X surround track is quite stunning, immersive, bass rich and natural. The extras package, although having all been previously available, is still quite comprehensive.