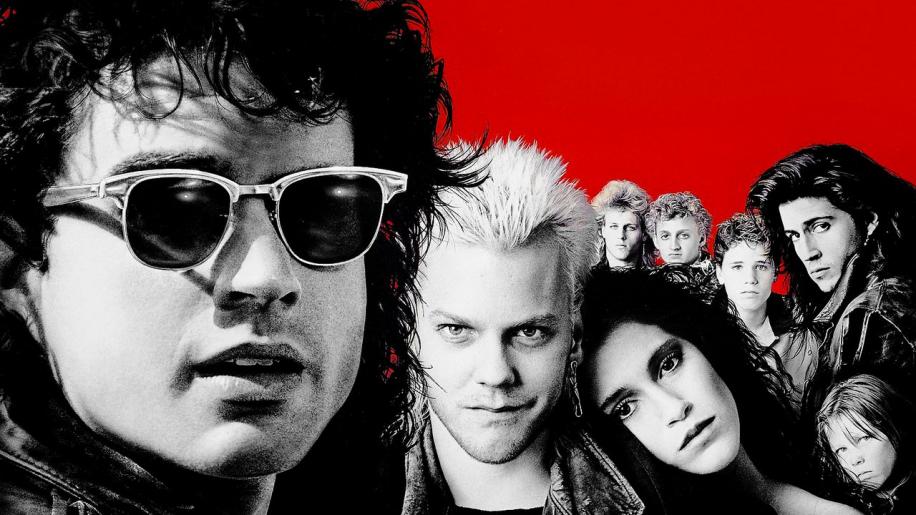 I remember watching The Lost Boys years ago and thoroughly enjoying it. Back then this movie was seen as a breath of fresh air in vamp horror movies, offering a hip alternate view of the vampire milieu.

The story begins as Lucy Emerson (Dianne Weist) moves to her father's house, after a traumatic divorce, with her with two sons: Michael (Jason Patric) and Sam (Corey Haim). Here, they intend on forgetting their previous life and starting again in this seemingly idyllic seafront town. Things start going awry when Michael is captivated by a beautiful girl called Star (Jami Gertz) who lures him into the hands of the local biker gang leader, David (Kiefer Sutherland).

Though Lost Boys has aged considerably since it creation in '87, it remains an enjoyable horror/comedy. Despite having very little to do, Kiefer Sutherland has huge onscreen presence and his portrayal in the movie is an iconic image from the '80's horror scene. There are lots more to like in Lost Boys than that, though. The style of the movie is very well done and the special FX, though crude, are surprisingly potent. This may have something to do with there being only two green-screen effect shots. The rest of the FX is entirely practical, making us believe more in the characters and therefore the movie's premise as a whole.

Humour is also very well handled, as in one scene where Sam is talking to a man, clearly a vampire, flying outside his window: “Let me in, I'm not a vampire!” yells the vampire. “Well, what are you, the Floating Nun?” replies Sam. Well, I laughed as I did at Corey Feldman and Jamison Newlanders deadpan performance as the Vampire lore masters. They often get the best lines and scenes and seem to enjoy themselves when onscreen together.

All is not perfect, however. The horror content is not particularly horrifying, being more style than impact. A few moments, like the head bite on the beach or maggot scene, aren't bad but there aren't enough of them. Disappointing, too is the final showdown - a particularly anticlimactic scene considering the build up.

Though Corey Haims performance as Sam is actually not bad at all, it is very much out of place to me. You are just getting comfortable watching Sutherland et al when a cut to Sam yanks you out of that comfort. It's like two different tempo's, which may be intentional, but the differences mean you aren't entirely secure with either one. It's not as bad as “Three Kings” but it's enough to slightly tarnish an otherwise good movie.