The Lord Of The Rings: The Return Of The King DVD Review 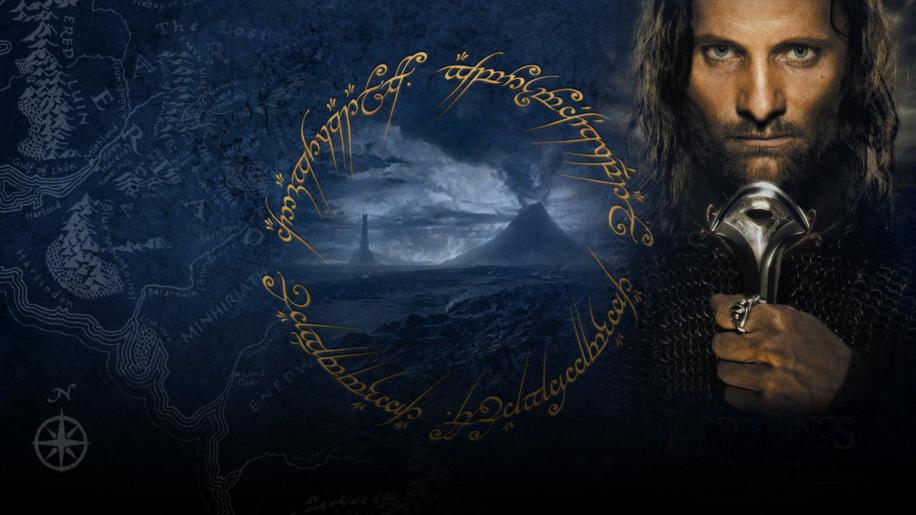 The Return of the King
maintains the high quality transfers
exhibited by the previous The Fellowship
of the Ring and The Two Towers DVD releases. Presented anamorphically at the
original 2.35:1 aspect ratio the image
constantly impresses.
The prologue sequence demonstrates
how bright and detailed the image is
when dealing with daylight conditions
- accurately capturing the vivid colours
of the location and presenting perfect
fleshtones. Skip ahead to Chapter 27 and
the confrontation with the ghost warriors
in the Paths of the Dead, and you can see
that the high level of quality is maintained
in even the darkest scenes. Black levels
are solid and accurately rendered,
shadow detail is obvious and you can
really appreciate the amount of work that
went into creating the special effects.
On the downside, there is a slight
amount of edge enhancement evident in
the transfer, and when it comes to the
major battle scenes later in the film detail
is lost in the backgrounds. However, if the
previous releases are anything to go by,
these issues should be resolved when
the film is split across two discs for the
Extended DVD Edition later in the year.

From the beginning, The Return
of the King's Dolby Digital 5.1 EX audio mix
is a joy to behold. The score is rich and
warm, while the surrounds are constantly
employed for ambient effect. But, as you
might expect, it's in the battle scenes
where the mix really proves its mettle,
and here are a few of the highlights:
Chapter 18 - The rumble of bass
accompanying the off-screen march of
the Orc army on Minas Tirith.
Chapter 27 - Superb use of panning
around the surround speakers as the
laughter of the dead reverberates around
the room.
Chapter 30 - While the chants of the
Orc army fill the surrounds, the room is
shaken to the core by the tremendous
bass accompanying the crash of fireballs
into the buildings of Minas Tirith.
Chapters 35 and 37 - The Battle of the
Pelennor Fields is every bit the superb
piece of surround sound encoding we
hoped it would be. In audio terms it's a
definite rival to the opening scenes of
Saving Private Ryan.

As always, this two-disc edition
features a fair array of extra features, but
for any genuine insight into the creation of
any specific elements from the film, you'll
have to wait for the four-disc edition.
The Quest Fulfilled: A Director's Vision
(23 minutes) takes a look at the film's
narrative and characters, cramming in
plenty of interview and behind-the-scenes
footage along the way. Keep you eyes
peeled for a great line-flub by Ian
McKellen, footage from the original
animated storyboard, and the rough
CGI reel Peter Jackson showed to New
Line in an attempt to get them to
produce and distribute the movies.
A Filmmaker's Journey: Making
The Return of the King (27 minutes)
takes a slightly more in-depth look at
the making of the movie, but unfortunately
repeats a fair amount of material found in
the previous featurette. Areas of focus
include casting, weapons training, music
and the end of the trilogy.
National Geographic Special - The
Lord of the Rings: The Return of the
King (52 minutes) is narrated by
wee dwarf John Rhys-Davies.
This documentary is a complete
break from the others and
attempts to draw parallels
between various characters from the films
and history - examples being William
Wallace and Elizabeth I for Aragorn,
Benjamin Franklin for Gandalf and
Rasputin for Grima Wormtongue.
Following on from these lengthy extras
are six short featurettes created
for lordoftherings.net that look
at specific characters and
places from the film.
They are Aragorn's
Destiny (three
minutes),
Minas
Tirith:
Capital of Gondor (three minutes),
The Battle of Pelennor Fields (two
minutes), Samwise the Brave (five
minutes), Éowyn: White Lady of Rohan
(four minutes) and Digital Horse Doubles
(five minutes). While the majority of these
are pretty disposable, Digital Horse
Doubles is a fascinating look at the superb
CGI work from the film that just might
have slipped your attention.
Following on from these come a pair
of theatrical trailers, a six-minute trailer for
the entire trilogy, a short featurette/promo
spot for The Lord of the Rings: The Return
of the King and The Lord of the Rings: The
Battle for Middle-earth computer games,
and 13 TV spots. Sadly, there is no
preview for the Extended DVD Edition
this time around.
So there you have it, a reasonable
collection of extras that may be of interest
to the casual fan. But if you want the real
meat about the making of the movie, then,
like totalDVD, you are just going to have
to wait until November for the four-disc
Extended DVD Edition.

A great DVD release for those who wish to
savour the theatrical cut of the film over and
over again. However, for the hardcore fans, it
can't hold a candle to the promise of the
Extended DVD Edition due later this year.