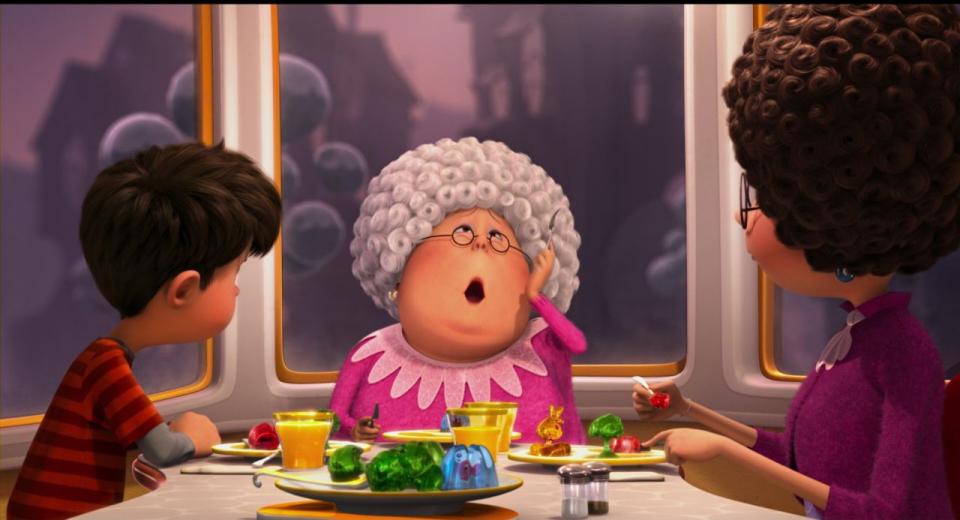 This review is based upon the 3D movie. The 3 disc SKU also includes a 2D version, DVD and Ultraviolet downloadable copy.

The picture is presented in 1.85:1 full screen 3D and the AVC-Mpeg transfer is flawless. From the second the main menu appears, you know you are in for a 3D treat. This is the best animated 3D film I have seen to date. In comparison to recent release Brave, the actual animation is not as sophisticated and the actual backgrounds at first glance are not as busy or detailed. What makes it special is the 3D rendering, which has created space and depth much more effectively than Brave. There is no layering present, just a seamless sense of depth that incorporates the characters in a way Brave failed to some extent to do. Pop outs start early on in the film and continue all the way through. For me, I can take or leave them, preferring depth, but many see this as a measure of “proper” 3D and what they shelled out the extra cash to experience. All the animated characters have a real sense of roundness and move in graceful natural shapes. Even the buildings in the town seem to be complete 3D structures, not layers of low relief as is often the case.

The colour palette is bright, vivid and with a feast of detail when you start to look for it. The simple, cartoon feel is only glossy top surface to what is an intensively rendered scene, with every tree, house and prop individually created. The perfect synthetic sheen of the town soon gives way to the murk of the exterior wasteland and this in turn is replaced with the bright and pristine forest of the Lorax. Unlike Brave, the 3D picture remains rock solid throughout. I have my suspicions that while The Lorax was optimised for 3D from the start, it was more of an afterthought for Brave and that led to compromises in the 3D.

I am trying to find some negatives in the picture and failing to do so. Despite the bright colours, there are no issues around solarising or banding and of course the exposure is spot on. Low level detail is harder to come by, given the intensity of the picture, but the darker scenes still have lots of detail and things like water reflections come across very well indeed.

This disc is one to impress the neighbours with and no doubt many shops will also use it for demos as the bright picture is as eye catching as it is stunning quality. Comparisons with Brave show that here, The Lorax needs to play second fiddle to its Pixar cousin. There is nothing wrong with the sound at all and if I had not had Brave in the player ten minutes before I would have given this a 10 as well. What it lacks is the spaciousness and precise effects positioning that defines the Dolby Atmos 7.1 down mix that Brave introduced us to. The Lorax still delivers an amazing DTS-HD MA 5.1 stream and is as dynamic, clean and immersive as you could ever want, but it falls slightly short of what Brave delivered.

The score is a mix between orchestral, choral and big band, with some more modern sounding tracks. Some of it is a little light and fluffy for my tastes and is typically cartoon, as such it does fit the film well. Dynamic range is a little limited, but bear in mind this film is aimed at the little ones and loud noises can cause involuntary reactions…

The surround mix is full of the main music score, voice effects and ambient surround, so a full range system is required to get the best out of this movie. The low frequencies are well controlled, with very little deep bass. Dialogue is generally crisp, but a couple of lines in the opening song get buried and the odd word is hard to catch on some of the louder passages.

There is nothing here to trouble a standard surround system and it does not disappoint taken as a whole, but Brave still wins on points. Universal have really put together a really high value package here. The 3D triple disc SKU contains the 3D movie, 2D disc with extras and a DVD with a copy of the film and less comprehensive bonus sections.

The main Blu-ray extras include the following:

Three mini movies, all based around The Lorax.

Deleted Scene: This is an extended scene around the “thneede” that the Once-ler has created. It was obviously a last minute cut as it is a fully finished clip.

Sing-a-long version of “Let it Snow”

“Mini-Games” – a pair of simple games using the Blu-ray remote. One being a platform game, the other a collect the flowers for points game. They are OK for a few minutes each!

The most interesting short seeks to teach one how to draw one of the characters from the film in a few simple steps. Even the most ham fisted artists like me can create something that is at least recognisable

A number of other shorts are contained within an interactive “Explore Truffula Valley” section. This contains a large number of short clips, but is a bit tedious to navigate and I cannot work out who it is aimed at. The navigation and look is quite simple and aimed at younger children, but the content includes early animation sequences and other line drawings that would not appeal to them.

We also get interviews with some of the cast and crew, talking about their contribution to the film.

A good set of extras and easy to navigate. Resume and language support are all excellent, with a wide range of subtitles and language tracks available. These include Spanish, Chinese, Hindi, Thai, Arabic and Korean. As you might imagine, the disc is region free. The Lorax is one of the best looking 3D animations to date, but is let down a little by the failure to really get under the skin of the original Seuss material. The re-written storyline is fairly good and it will hold the attention of the little ones, being better in that respect than Brave. The problem is that it debases so much that was good about the original book and then successfully deflects us away from the issues with stunning visuals.

The 3D picture looks really good and the animation is extremely slick, giving both Brave and Ice Age 4 a run for their money. It just loses out on points to Brave in terms of sound, but it was a close run thing. The SKU offers good value for money, with a wide range of extras and different versions of the movie to watch and download.