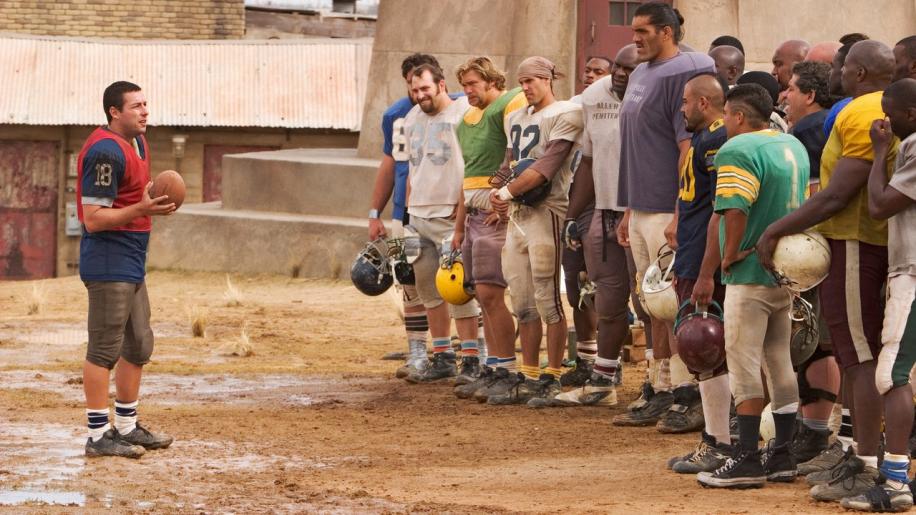 With an anamorphic widescreen transfer, I was a little disappointed with this disk. The print used was free of dust and scratches, but that's no real shock for a movie released this year. Colours are fine, with flesh tones looking good and when we have the vivid reds, such as Cox's dress or the shifting sands looking suitably beige of various degrees, we get no bleed and nice gradients appropriately. But, in the opening sequence, it just looked particularly grainy....of sorts. I can't quite work out if it is a style thing or what, it just didn't look right or up to the standards later on. Maybe it's me nitpicking, but it was off-putting.

An un-involving Dolby soundtrack is what we have here, which focuses primarily on the front speakers - until, as it's an MTV movie, we get some music which is blasted out of all the speakers. Dialogue is clear but it's not drowned out by the aforementioned music, as it's rarely, if ever, that they are played at the same time. Having said that, the soundtrack is nicely clear, with dialogue sounding natural, but I just wished for once that it didn't have to rely heavily on music to bring the soundtrack alive.

Talk about vague titles for the extras! Ok, first off we have First Down and Twenty Five to Life which is another name for a making of, which runs for 21 minutes. It's sadly not very deep, but hey, it's an MTV movie right? Deep and MTV go together like Michael and LaToya Jackson i.e. they're never seen together. Next up, The Care & Feeding of Pro-Athletes which is a 5 minute featurette about the catering. Yes, you heard me right there, the catering. Words fail me. Lights, Cameras, Touchdown! is a 6 minute featurette relating to the actual football game and how it was filmed and “acted” to ensure the authenticity, but it's not particularly gripping stuff. Extra Points is a break down of how 5 effect scenes were actually created, from the external shot going to an internal shot of the bus for example. Very interesting for budding film makers. The Deleted Scenes are next and we have 8 of them, although half are extended scenes in reality. They run for a total of 6 minutes, but are clearly cut for running time, although one or two should have been kept, in my opinion. The music video, by Nelly was switched off in seconds, simply as I can't stand rap. Here Comes The Boom is basically footage from the movie, accompanied by the tune of the same name by P.O.D. Fumbles & Stumbles which is a 4 minute blooper reel, mildly amusing at best but nothing more. Last up are the previews for “The Honeymooners”, “Beavis & Butthead”, “Hustle & Flow”, “Bad News Bears”, “Oprah Winfrey 20th Anniversary DVD collection”, “The Longest Yard: Lockdown edition” and the TV show “Everybody Hates Chris”.

Well, let's be totally upfront, I prefer the original, but this is better than the Vinnie Jones version, which isn't saying much. Sandler isn't his most annoying here, but Rock simply has the better lines and steals this vehicle away from him. I think the nicest thing I can say is this is a real beer and pretzels movie, which as I dislike both of those, sums it up quite well.