Over budget, over long and over here. 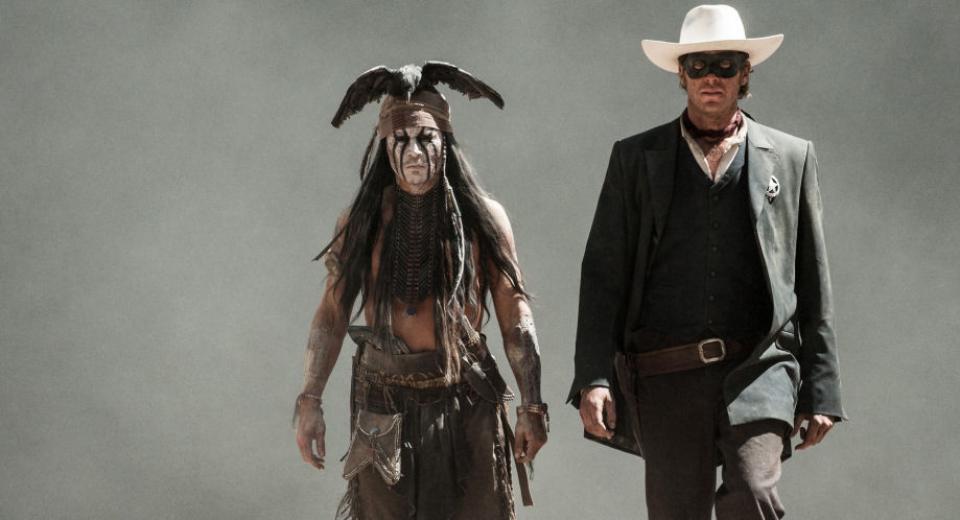 A misguided attempt to relaunch the classic cowboy character of the Lone Ranger to a new generation results in a bloated epic that costs so much it bankrupts the producer and helps kill the genre for over a decade. If you think that opening sentence relates to the latest Johnny Depp vehicle you’d be wrong because it does in fact refer to The Legend of the Lone Ranger, the last big budget outing for the masked avenger that also resulted in box office disaster. That 1981 film became famous for a complex stunt that went horribly wrong, a leading man who has appeared in nothing else before or since and a bloated budget that delivered another Western-related bomb to the box office after the previous year’s Heaven’s Gate. The losses incurred by The Legend of the Lone Ranger hammered the final nail into the coffin of Lew Grade’s production company ITC, a coffin already waterlogged thanks to the disastrous performance of Raise the Titanic.

Disney should really try and learn from the disasters of past, then perhaps they wouldn’t be doomed to repeat them. It’s hard to know exactly where the blame lies for The Lone Ranger, it’s so misguided that it’s a miracle the film ever got the green light. Whilst it is unfair to criticise a film purely on the basis of its budget, you have to wonder how anyone can think spending $215 million on a Western was a good idea. In fact it starts to look like utter lunacy once you add in the $175 million that Disney spent on marketing because at a total cost of nearly $400 million, The Lone Ranger would need to take about $800 million worldwide just to break even! Westerns rarely make money in the States and never sell well in the international market. The brilliant idea was obviously to use the creative team behind The Pirates of the Caribbean - star Depp, producer Jerry Bruckheimer, director Gore Verbinski and writers Ted Elliott and Terry Rossio - to create a new money-spinning franchise for the studio. The plan imploded and Disney have already written off $150 million after The Lone Ranger unsurprisingly failed to trouble the US box office.

In fairness to the filmmakers, at least the money is up there on the screen for all to see and The Lone Ranger boasts some impressive set pieces including a finale involving two speeding steam trains. The problem is that the film constantly feels the need to follow one amazing visual with another. It isn’t enough for us to see Monument Valley in all its widescreen glory, there has to be a scene where Armie Hammer’s John Reid (who becomes the Lone Ranger) wakes up on a platform hundreds of feet up on a sandstone butte. The scene doesn’t really serve the narrative and must have been expensive to film but as long as it looks cool who cares, right? Disney originally cut the budget of the film after the box office failure of Cowboys and Aliens but the production had issues with the weather, causing budget overruns that were actually covered by producer Jerry Bruckheimer.

The problem with The Lone Ranger is that regardless of how impressive and well executed its action scenes are, the film constantly reminds you of other, far better, Westerns. The film opens with an aging Tonto telling a young boy the story of the Lone Ranger, which immediately brings to mind Dustin Hoffman’s aging narrator in Little Big Man. That film centres around General Custer and the battle of Little Big Horn, so of course the cavalry officer in The Lone Ranger, played by Barry Pepper, bears more than a passing resemblance to Custer. The use of Monument Valley evokes memories of the Westerns of John Ford, especially The Searchers, and even the film’s train chase set piece ends up reminding you of the climax of Back to the Future Part III, whilst Mad Dog Tannen is a clear precursor to William Fitchner’s Butch Cavendish.

The idea of the railroad crossing the American continent and bringing with it civilisation forms the basis of Sergio Leone’s classic Western Once Upon a Time in the West and is a major plot point in The Lone Ranger. There’s also great emphasis placed on a pocket watch carried by Tonto, the significance of which is only fully revealed at the end of the film and again Leone used that plot device in both Once Upon a Time in the West and For a Few Dollars More. Aside from stealing entire plot points from Leone’s Westerns, Gore Verbinski also pays homage to the Italian maestro on more than one occasion with both shot composition and sound effects, whilst Hans Zimmer's score at times sounds very reminiscent of the music of Ennio Morricone. In principal we have no problem with a film referencing other films, after all there were plenty of those in Back to the Future Part III but they were done in a clever way that worked within the confines of the plot.

It’s the plot where The Lone Ranger really falls over because the first third and the last third are quite good fun but there’s an over-complicated middle section that just drags the film to a halt. In fact the film suffers from generally being far too long and could have done with losing at least thirty minutes, which would have improved the pace and kept the budget down. The story itself, as told by the aging Tonto, involves a lawyer named John Reid who is forced to don a mask and seek justice as various parties fight over the new railroad and the possible discovery of vast deposits of silver ore. As convoluted as the plot is at times the revelation of Tonto’s past and the main villain are fairly obvious from the beginning, especially if you’ve seen any of the Westerns the film so obviously references. As well as an excess of plot, the film also struggles with its tone, constantly flipping between some quite unpleasant scenes of violence to Buster Keaton styled comedy from Johnny Depp.

Which brings us to Tonto - it just seems incredible that in this day an age, a non-native American would be cast in such a famous ethnic role. We thought that kind of casting had been frowned upon since the mid-80s when Alec Guiness 'blacked-up' to play an Indian in David Lean's A Passage to India. It is also rather distressing to see a film making light of what was, in effect, genocide and using the suffering of the native Americans as nothing more than another plot point. However, racial insensitivities aside, the other problem with Depp’s casting as Tonto is that it draws attention away from the Lone Ranger himself. It’s a bit like casting an unknown as Batman and Brad Pitt as Robin, it just throws the entire film off balance. In this version of the story, which is being narrated by Tonto, we get the impression that the whole plot is being driven by Depp’s character and that the Lone Ranger himself is being manipulated along with everyone else. Whilst it’s good to see Tonto treated as more than a racist comedy side-kick and all the key elements are in place - the mask, Silver the horse, the William Tell overture - the Lone Ranger ends up being a supporting player in his own feature.

This isn’t really helped by the casting of Armie Hammer because although he’s charming enough and handles much of the comedy well, a bigger name as the Lone Ranger would have provided greater balance to Depp’s Tonto. It’s also possible that audiences are finally beginning to tire of Depp’s wacky schtick because he's had a few box office misfires recently and Tonto’s antics become annoying very quickly. It seems that all the characters Depp plays these days are nothing more than live action cartoons and in fact his best performance recently was as just that in Gore Verbinski’s animated Western Rango. At least the rest of the cast are on good form, with William Fitchner clearly enjoying himself as Butch Cavendish and Tom Wikinson and Helena Bonham Carter providing solid support, especially the latter as a one legged madam. To round out the British-heavy cast is Harry Treadaway as a cross-dressing cowboy and Ruth Wilson, best known for playing a saucy serial killer in the TV series Luther, as the love interest.