The Circle of Disney Remakes 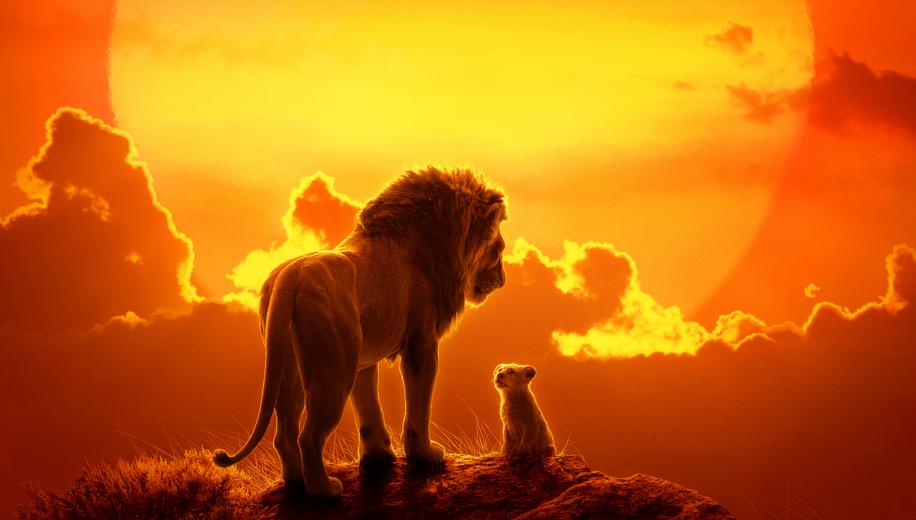 The shot-for-shot remaking of the 1994 Disney animated classic seems a pointless moneymaking exercise and unsurprisingly remains a technically proficient marvel that adds nothing new.

There's absolutely nothing wrong with Jon Favreau's visually opulent 'live-action' adaptation of The Lion King, which follows the long line of remakes of Disney's classic back-catalogue that has, thus far, included straight remakes like Aladdin and Beauty and the Beast, and complete reworkings like Maleficent, as well as those somewhere in-between, like Dumbo and The Jungle Book, which Favreau also directed. The Lion King hits all the right beats, carries all the same songs (from Zimmer again), even going for very similarly framed shots of stampedes, celebrations of birth, to the point where it would be easy to believe that - if there was the technology - they just fed the 1994 film into a computer program that scanned and replaced the cartoon images with computer-generated 'real-life' equivalents.

Favreau's film is, of course, now infamous for having been revealed to be almost entirely computer-generated, raising questions over the 'live-action' in this live-action remake. Getting past that, however, and you have an undoubtedly spectacular version of the classic, which is every bit as watchable for young and old alike, and which is - if nothing else - an absolute testament to the quality of visual effects technology. Voice actor choices are interesting, with James Earl Jones' return welcome and Chiwetel Ejiofor (Doctor Strange, Maleficent 2) suitably smooth as the villainous Scar, but Donald Glover and Beyonce (!) making for a slightly less effective Simba/Nala casting (zero chemistry as adults, far better as cubs), the latter grandstanding during the song sequences but offering little else, whilst Glover can play light and dumb, but can't quite convey any weight to the loss the character has suffered (clearly more on Solo form here than Atlanta). Easily the standout is Seth Rogen's Pumbaa, and Rowan Atkinson's Zazu is seriously missed.

Visually stunning, and still capable of eliciting some tense, dangerous and heartbreaking moments, bringing fun to the frivolous flourishes, a sense of adventure and impact to its grand battle finale, The Lion King is a perfectly serviceable, possibly even good, movie, but nonetheless can't inspire the same feelings as the classic original.


The Lion King (2019) hits UK 4K Ultra HD Blu-ray courtesy of Disney in suitably spectacular fashion. Sure, it's technically just another 2K upscale, but the dominance of visual effects easily gift this feature a sizeable upgrade over the SDR Blu-ray for its HDR-enhanced 4K rendition.

The Lion King (2019) is now somewhat infamous for being almost entirely computer-generated, with varying reports of around 95% visual effects for the piece, despite a seeming strive to render photorealistic animals and stunning real-life environments. Sure, that may come as something of a disappointment, but the reality is that - in visual terms - it leaves this inherently digital production looking damn-near perfect, showcasing stunning fine detail, clarity and texturing impressive on both the fabulously rich close-ups (the fur, manes and feathers on the lead characters is simply astounding) as on the jaw-dropping backdrops (the broad plains are gorgeous). You can lap up every little nuance, and the clever 'filming' techniques which shift focus and offer 'camera' movement absolutely transport you to the wonderful landscapes.

Of course, it's the HDR and WCG which defines the presentation, giving rich red life to Rafiki's nose, the green 'jungle' foliage, the lightning strikes and blazing fires, and of course the gorgeous golden lions, but never better than on those absolute stunning sunsets. Black levels afford wondrous shadow detail to the storm sequences and darker moments, giving a backbone to a fabulous, absolutely reference presentation.

Suitably engulfing during the more exciting sequences
The accompanying Dolby Atmos provides a richly atmospheric delivery of the score and effects, allowing the vocals priority throughout, but also gifting the film a moody, heady mix that is suitably engulfing during the more exciting sequences. There's no doubt that the original has the edge in terms of atmosphere - and fun song tracks - but there's plenty to enjoy here too, and whilst it requires a hint of volume adjustment, LFE gives some wonderful weight to the growls, fighting blows, and elephant footsteps. Hard to quite qualify as a demo mix, it still doesn't diminish from this engaging experience.

A decent selection of extras
Disney's The Lion King remake gets a decent selection of extras, even if none of them are promoted onto the 4K UHD disc itself, with Favreau's Intro and Commentary being the highlights, whilst a three-part Documentary further reveals background into the production, and some Song Selection, Music Videos and Sing-Along making up the bulk of the rest.


Visually stunning, The Lion King is a perfectly serviceable, possibly even good, movie, but nonetheless can't inspire the same feelings as the classic original.
The Lion King remake looks absolutely jaw-dropping in 4K, and sounds very good in Atmos too, with a decent selection of additional features to round off a strong package for fans to pick up, even if it's only completists that will want this to sit alongside their copy of the original classic in their collection.