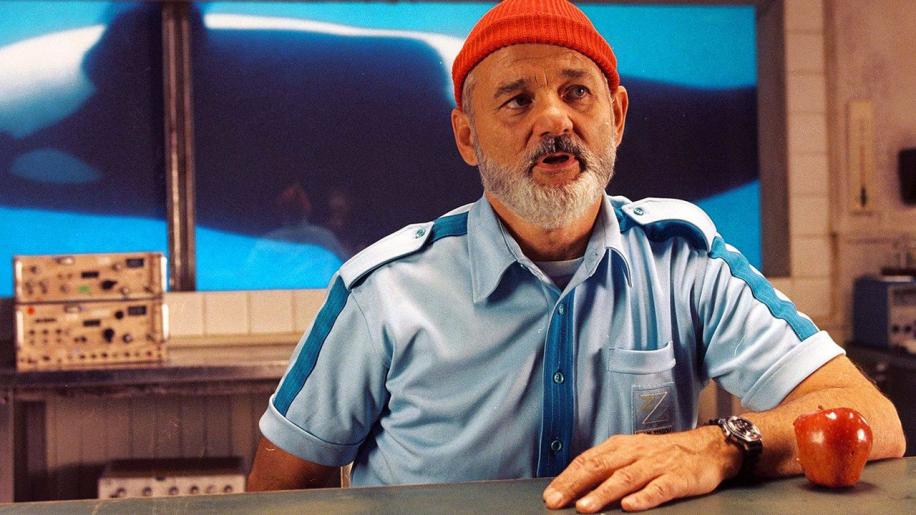 For some reason, all of Aquatic seems to be oversaturated leaning toward a shiny white presentation. Colours appear a little too vivid tending to exaggerate primaries, especially those red hats that crew Zissou wear. This off natural balance is probably to further ensconce Aquatic into a idyllic surreal world. Whether by introducing this colour balance or not, the overall quality is rather mediocre. I noticed a haze about the picture on both my TV and LCD monitor that never dissipated. There is a high level of detail, though, especially offshore. Look to the premier showing at the beginning of the movie which his full of deep textures and minute detail. I also noticed artifacting in some of the deep sea scenes, where Zissou investigates a sunken plane. While there are problems, none of them make the picture bad, but recent releases are of such high quality that even these faults shouldn't be there.

Aquatic does have a remarkably catchy theme track. You'll hear it over the DVD menu and throughout the movie. I just can't get it out of my head. Other musical queues are equally well thought out including one by Devo that seems to fit in very well. Bass isn't used as often as a big action movie, as you'd expect. Instead the front three are the speakers that will make or break Aquatics sound. If you have a really good centre, then this movie will allow it to shine. Otherwise the other channels are used sparingly, but implemented well when required.

Directors commentary is a bit to self indulgent for my liking. I found their explanations of the story spoilt the fragile sense of disbelief that held the film together.

Starz on Set behind the Scenes is fairly good. Nothing to get excited about, mind you, but good. There are some nuggets of info in there, but nothing spectacular.

That's your lot apart from deleted scenes which I never like because they generally don't work. There is a much more comprehensive two disc version, also a Criterion release, that would appear to be the better buy.

Like 12 monkeys, or Being John Malkovich even Lucas' Star Wars prequels, you will like this movie purely on the strength of the visuals and directorial style. Even if you can imagine well healed Soho coffee bar frequenters gasping at the hidden meanings of a movie like this, Aquatic isn't so far up its own backside to avoid enjoyment. Sit back and let the movie wash over you and you will like it. But get the two disc version instead.