Honour, bravery and comradeship in the face of brutal atrocity. It's a war picture, what were you expecting, kittens and rainbows? 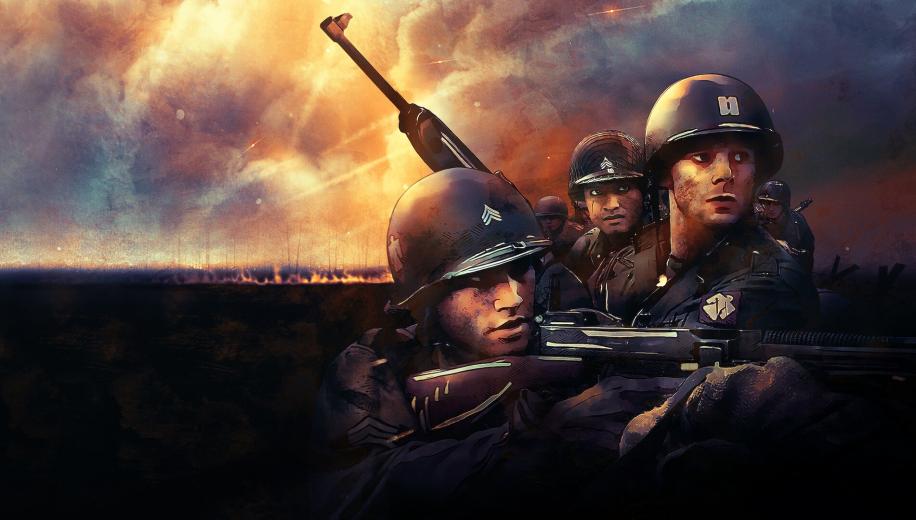 Rotoscoping is the art of blending live action and animation. When it comes to rotoscope in cinema, it’s often mentioned in the same breath as Walt Disney or Richard Linklater, the former of whom pioneered the use of it to obtain a level of realism in his animated characters, the latter, the opposite, focusing on adding surreal texture to ‘mundane’ live action. Recently, its use was highlighted in the strange and intimate Amazon drama Undone, which explored the impact of the artistic interaction between form and subject that could be achieved with the technique. With The Liberator, the new four-part Netflix war drama, the technical boundaries are pushed again.

Developed and written by Jeb Stuart (Die Hard, The Fugitive) and based on the Alex Kershaw’s non-fiction account of the military career of Felix Sparks, The Liberator follows Sparks, a Texan soldier in command of the 45th “Thunderbird” Division during the second world war. Alongside Sergeant Coldfoot and Corporal Gomez, the series focuses on Sparks’ leadership and real-life heroism as he supports his multiracial unit of cast-offs, from their mobilisation training through to their 500-day trek through Nazi occupied Italy, ending at the gates of Dachau, the site of some of the greatest atrocities ever visited on humankind.

The series does an affecting job of depicting the Thunderbird unit as they become the 157th Regiment, one of the very few to include a mixture of white, Hispanic and First Nations soldiers. The Thunderbirds were a national guard unit, the first to be mobilised to active combat overseas, and starting with their first engagements in Sicily, the series tracks the camaraderie between these men as they fight side-by-side through particularly tough skirmishes. The further they progress, the more we see that they are surviving the only way possible – by giving themselves entirely to the brutality of war. Sparks, Coldfoot and Gomez find an honour and humanity through their harrowing experiences, which stand as a totemic counterpoint to the master-race mentality embodied by those fight against. But the series is not without recognition of the hypocrisies at work within the war, as these men, fused together in battle, are reminded that the country they are fighting for is the same one that prevents them from even drinking at the same bars in peacetime.

The series hits all the right notes drawing easy parallels as a sort of condensed Band of Brothers.

In his portrayal of Felix Sparks, Bradley James does an admirable job of depicting a true-born military hero. His heartfelt performance gives power to passages of dialogue that could otherwise come across as trite; his laboured illustrations of his devotion to his companions and talk of honour in his letters and internal monologues are blunt and occasionally jingoistic, but they work – forgiven further by its complimentary comic-booky visuals. Worthy of as much praise and more are Jose Miguel Vasquez as Gomez, an actor with very little to his name but who clearly excels here, and Martin Sensmeier (Westworld, The Magnificent Seven) whose authenticity and depth as Coldfoot begin to redress an imbalance in stereotypical depictions of stoic Native American soldiers.

All of which is to say that, as a war drama, the series hits all the right notes drawing easy parallels as a sort of condensed Band of Brothers, losing none of the deeply human interactions but maybe some of the haunting losses of that series in its much shorter running time. What the series is never fully able to justify is its style. Or rather, its blend of styles: marrying overwrought pulpy comic script to depict a tense journey to a devastating climax, with an only occasionally serious graphic novel aesthetic .

The studio responsible for the animated elements of the series, School of Humans, call their technique “Trioscoping,” a hybrid of more commonly used rotoscoping and CGI element creation. The claim is that the new technique is able to enhance human facial expressions, so that the nuances of a performance endure through the animation process – a legitimate critique of traditional rotoscope. It also claims greater realism and detail in CG rendered backdrops, ensuring less of a dissonance between live action rotoscoping and purely animated elements. I’ll finally get to some criticism now and say that The Liberator achieves both of these things in spades. The cohesion of the aesthetics of the series is exceptional, the colour palette (particularly through the second episode) is stunningly vivid and the capture of the performances is a technical marvel.

But here’s the split: why?

...the series is gorgeous.

The answer seems to be “because we can.”

There’s an argument for that, a good argument; the series is gorgeous. But director Grzegorz Jonkajtys is an effects man – previously a VFX artist for ILM – and his devotion to aesthetic is evident for good and bad. Little missteps in the animation process betray a misunderstanding of the way in which Sparks’ story is meant to connect with us. He and his unit had arguably one of the most physically and emotionally attritive missions of the war, but choices in the art direction include vapoury blood splashes that don’t wash away in a river, boots and tanks that leave no trace on the terrain and overstated muzzle flare, detracting from the brutality of these real events by cartooning it in a way which is out of keeping with the tone of the series. Other choices – such as an ever present ‘screen door effect’ – are presumably included to enhance the impression of the story being told from the pages of a comic or watching it projected on an old screen…or both, or neither. While eventually becoming just an element of the visuals, they are initially distracting at a time when our focus should be on the action, not the artifice.

War comics have an enduring appeal, from Commando, with its comfortable devotion to pulp adventure, to Battle, with its focus on deeper more resonant stories like Charley’s War. But despite the laudable execution of its plot and central characters, ultimately, Jonkajtys’s desire to create this incredible live-action war comic seems to be clouded by an uncertainty as to which comic he’s trying to emulate: Battle or Commando?