‘Deadpool’ for all ages? 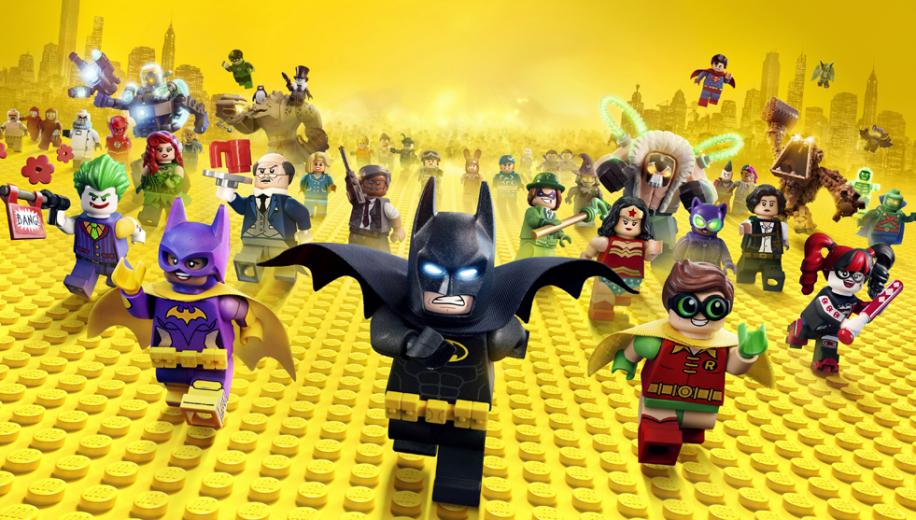 With the exceptional success of 2014's The LEGO Movie it is no surprise there would be a follow-up, although The LEGO Batman Movie is more a spin off than a sequel. The resulting film is chock full of the same wit, charm and enthusiasm that made its forbearer such a winner. Taking the helm for his first feature, Chris McKay (whose irreverent work on Robot Chicken makes him the ideal choice) crafts a wonderful tale in the LEGO Universe and fills it to the brim with jokes, one liners, sight gags, pop-culture references, self-parody and a general sense of fun. All the while taking the audience on an emotional journey through family, loss and acceptance.
In narrative terms the story is very simple, Batman is Gotham’s hero, universally adored but is himself emotionally stunted in that he refuses to acknowledge any feelings of loneliness or indeed companionship, even in the twisted bond with his nemesis Joker. All that angst it tested when the Phantom Zone releases the world’s worst criminals and he is forced to make choices to save the day. Heavy on humour, yet playing the pathos just right, the story is engaging, enjoyable and entertaining. It does, perhaps push the ‘family’ angle a bit hard at times, but this is forgivable in the larger picture. Another winning LEGO movie – what’s not to love?

The LEGO Batman Movie is a fully computer animated feature, but that is about as far as it goes for definitive source information since precise technical specifications have proved impossible to track down, even down to what Digital Intermediate (DI) it was finished with, we are thus unsure as to the native resolution of this disc; it is, however, presented as 3840 x 2160p in widescreen 2.40:1 aspect ratio, uses 10-bit video depth, a Wider Colour Gamut (WCG) and High Dynamic Range (HDR), and encoded using the HEVC (H.265) codec. We reviewed the Region free UK Ultra HD Blu-ray release of The LEGO Batman Movie on a Panasonic 65DX902B Ultra HD 4K TV with a Samsung UBD-K8500 Ultra HD Blu-ray player.


The UHD image is an absolute stunner

Whatever the native resolution might actually be, this disc is an absolute stunner! Detail is incredible with individual LEGO bricks being discernible within the various creations, such as vehicles, buildings, aircraft or landscapes. But more than that, bricks themselves have form, minute scratches or finger prints, even the odd chip. Check out the stippling of Batman’s cowl and how it reflects light, or the sheer awesomeness of Wayne Manor on Wayne Island. The intricate nature of the instruments in the Batcave, or the placards in the crowds and background advertisements (go back for a read, some of them are a scream!) Improvements over the (included) Full HD Blu-ray are readily apparent.

Being a LEGO movie you will expect it to be bright and colourful, and it is to a degree, there is always a hint of darkness – because it’s Batman – and with HDR and the WCG really pushing the boundaries, they really make this a stand out image. Check out the brightness of the explosions (or Batman’s eyes), the depth to the shadows, the richness of the colours (Joker’s suit!); each and every one is incredible to behold and makes the 1080 image positively dull by comparison. Landscape shots, or that of the Phantom Zone are just bursting with energy (check out the green lightning!) with the black level contributing to a wonderful sense of 3D pop. Indeed particular attention has been paid by the animators to the lighting and this really pays dividends with respect to the picture; check out the sunsets or the fireplace in Wayne Manor or the microwave as Batman cooks – the added depth afforded by the wider range is something to behold.

Digitally there are no issues, the transfer is as clean as a whistle and in every respect this is a stunning picture.

The disc defaults to the English 5.1 DTS-HD MA track (which is no slouch) so make sure to check Dolby Atmos in the setup menu if you want the full immersive experience. An aural tour de force is a phrase that comes to mind. Right from the off you are placed in the middle of the action as Batman narrates over the opening logos; the music swelling around the room as the dialogue penetrates from the front. Once the action starts, there are no holds barred; Joker's attack on McGuffin airlines with Batman’s timely rescue is an execution in surround expertise; effects are placed all around in 3D space – above, behind, left, right and everywhere in-between as gunshots, explosions, vehicle engines, dialogue, grappling hooks and more are positioned around the room, while the energetic score has its own layer in the mix, below which the bass holds everything in sway. It’s frenetic! Cut, a few minutes later, to Batman eating lobster thermidor in a huge cavern where the echoes of his chewing bounce around the room. Attention to detail forms the basis for the surround track as it follows precisely what is happening on screen allowing you to be cocooned in the mayhem. The above channels, while excellent in the ‘echo’ didn’t really stand out in the track as say Deepwater Horizon meaning some might not be using it as their demo disc of choice; it is, however, a very detailed, honed and accurate track with nothing lost in the mix, which makes for a very satisfying listen.

Disc 1 – UHD Blu-ray
Audio Commentary – Director Chris McKay acts as moderator to some 23 members of the crew (including editors, designers, producers and animation supervisors) all of whom have something very interesting to say about all the collaborative aspects of making a film as technically complex as The LEGO Batman Movie. It is an energetic and enthusiastic track with near non-stop information on everything about the film.

Disc 2 – 1080p Blu-ray
Audio Commentary – As above
Original Animation Shorts – Four short new animations, all roughly 2 minutes in length, featuring characters from the film; all are made with the same wit, charm and enthusiasm as that of the main feature and are well worth a gander; titles are: Dark Hoser, Batman is Just Not That Into You, Cooking with Alfred, and Movie Sound Effects: How Do They Do That?
The Master: A LEGO Ninjago Short – Another animated short, about 5 minutes, featuring Master Wu, high priest of Ninjago.
Deleted Scenes – Four scenes (incomplete) with a combined runtime of 7 minutes, their titles are: Batcave Studio, Lollipop, Batman & Mayor Swap, and Clayface.
One Brick at a Time: Making The LEGO Batman Movie – Fifteen minute feature looking at the complex nature of the animation process with plenty of interviews with those involved.
Rebrick Contest Winners – Will Arnett introduces three LEGO Batman stop-motions shorts created and submitted by fans.
Inside Wayne Manor – ‘Tour’ of the set with Batman/Bruce Wayne in two and a half minutes.
Brick by Brick: Making of The LEGO Batman Movie – Four minute look at the voice talent of the film.
Behind the Brick – Four minutes of the main characters of the film introducing themselves, the film and their ‘starring role.’
Me and My Minifig – 1 minute of the main cast talking about their respective LEGO figure.
Promotional Material – Trailers, essentially,10 in total, again containing the very same wit and charm that makes the film so enjoyable; titles are: Trailer 1 (has Will Arnett intro), Trailer 2, Trailer 3, LEGO Life Trailer, Follow Me Online, Don't Skip, Happy Holidays Jingle, Batsby New Year's, Team Cutdown, and Comic-Con Panel.

The LEGO Batman Movie is a spin off from 2014's The LEGO Movie, telling the tale of Batman and his emotional angst as he comes to terms with himself and those around him, but told with incredible wit, charm and enthusiasm. Based in the same LEGO Universe and chock full of the self-same jokes, one liners, sight gags, pop-culture references and self-parody it has been regarded as the ‘Deadpool’ for all ages, an accolade that is difficult to disagree with!


This latest 4K disc is another winner

The 4K UHD disc from Warner is another winner, the picture is absolutely stunning in terms of detail, colour reproduction and black level, with the higher resolution, HDR and WCG acting together to bring about an image that is breath-taking. The Dolby Atmos track is thoroughly engaging, very well layered with good bass and pin-point accurate effects, though doesn’t quite hit the reference point. The extras seem plentiful but are quite frivolous, though the gems that are there are worth picking out.