The Legend of Zorro DVD Review 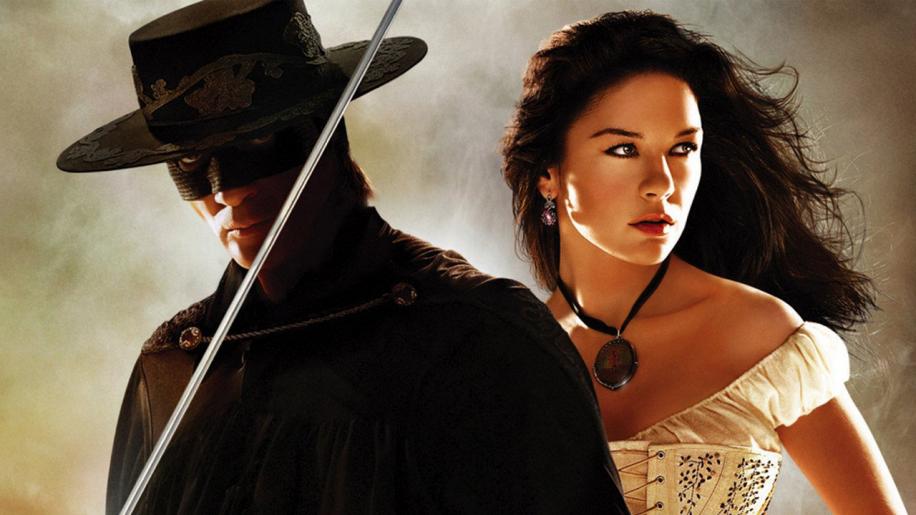 The disc has been given a theatrically correct 2.35:1 aspect that has been anamorphically enhanced for widescreen TVs. With a nice modern print we have, for the most part, a pristine picture, it exhibits no print damage whatsoever and only the minimalist amount of film grain. Shot with deep rich red and orange hues the picture shines off the screen, thick bold and solid, only slight down side flesh tones tend toward the orange, and it really shows up the makeup in places. Detail was good throughout rarely softening and managing to cope well with mist and steam. Contrast and brightness, too, were set well giving deep, firm blacks. Digitally for most of the run time there were no problems with compression, though negligible edge enhancement could be noticed by the nit picky. However, there is once scene that is remarkably bad! The scene exhibits posterization, blocking, artefacting and contains low level noise, in short every compression problem you care to name, all nice and neat in one package. The scene in question is when Zorro is unmasked after preventing the train exploding, a grab of which shown below; it is glaringly bad and reduces an otherwise first class picture rating by one.

The English Dolby Digital 5.1 track has no such problems; it is nice and loud with good range and better separation. Whilst the rears are used sporadically to enhance the surround visuals, train, crowd and horse foot falls especially, there is hardly a moment when they are not employed to fill out the ambience or score. You really feel in the centre of the action. There is a fair amount of bass for Dolby, especially with the gun shots and explosions that give a satisfying thump from the sub. There is more left right separation than front rear, directionality given to dialogue too should the need arise which is otherwise clear precise and free from distortion or hiss. In all an excellent sound track, perhaps not the best of the best, but certainly up there to show off to the neighbours.

Quite a technical bent towards the extras of this disc starting off with a commentary with director Martin Campbell and cinematographer Philip Meheux. It is a thoroughly engaging talk, if skewed slightly towards scene specific technicalities, however there are a fair few on set stories and discussions about scripting and a spiritual return of the Hopkins character. Reflections between this and the first film meant little to me, but I enjoyed their rebuttal of some critic's harsh treatment of the film. In all an entertaining listen, perhaps best visited in two sittings for maximum enjoyment, also subtitled in English and Dutch.Next up there are four deleted scenes that can be watch individually or all together, all but the alternate beginning and end are available with or without Campbell's commentary, that scene is only available with them. Fairly short scenes that add nothing to the film and are easy to see why they were felt superfluous even without Campbell telling you. I quite liked the alternate beginning and end, like Campbell I thought the 'book ends' gave a nice sense of closure, would of course meant that it would have been the last of the films, which I also liked, but the studio thought otherwise, shame.On to the four behind the scenes featurettes which are watchable individually or all together. Each one covers its respective subject well containing interviews with cast and crew alike a deal of behind the scenes footage and completed film stock. Of particular interest to me was the train one, it was nice to see Weta involved, their miniatures are the best in the world and it certainly showed. Amazing to hear the visual effects people talk about their 'invisible' CGI, all too obvious to me I'm afraid. Why is it, in no matter which film you have these featurettes about stunts, they are always the biggest and the best, the most expensive and complex ever put on camera, when really, they aren't?

There are two multi-angle scenes, one of the party the other of Jones' sword fight in the winery, best option have all three on screen, shows finished product, rehearsals and behind the scenes filming. Thankfully is all over and done with every quickly.Brining up the rear is a selection of trailers of other films available.

Legend of Zorro is not the worst film in the world, but it's close. It doesn't take itself seriously enough when it should and never plays to its own strengths, the tragedy is a closer study of the family unit, its conflicts and outdated peoples hero against a new era of prosperity for the state would have made an intricate and engaging story, along the lines of Peckinpah but with fantasy. Unfortunately, by heading down the family comedy route Legend lost its way and was unable to find its way back, just like the doomed run of the train, so to the film is lost in a ball of fire. As a DVD the package is quite good, a near top notch picture and excellent sound are back up by a solid array of extras, though I expect the film to be bundled with is better original in a box set near you soon.