It's time to enjoy Termina in 3D 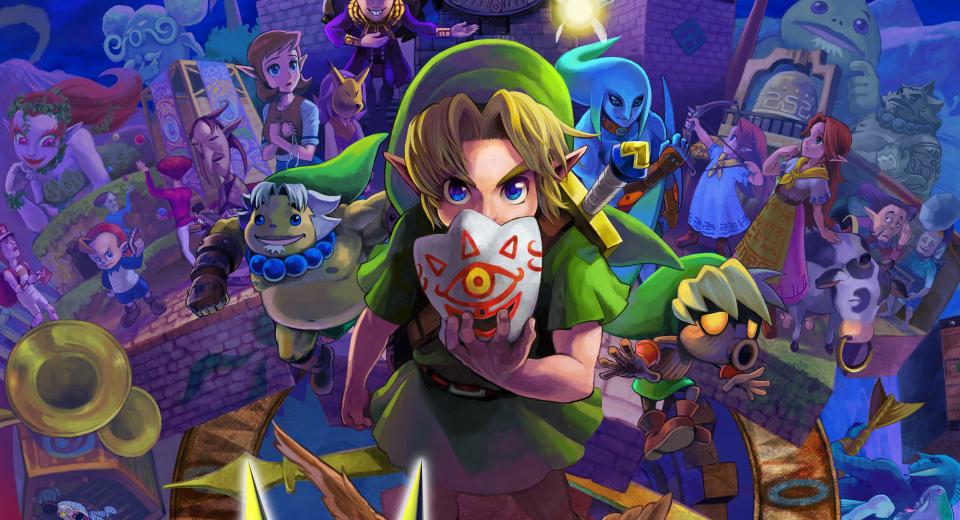 It’s been fifteen years since The Legend of Zelda: Majora’s Mask was first released on the N64.

Now, to coincide with the launch of the new 3DS, Majora’s Mask has the chance to shine again, and perhaps even be reappraised by those who didn’t take to it the first time around.

Having already shown that Link’s most celebrated outing, Ocarina of Time, could shine on the handheld, we now get the opportunity to revisit its darker N64 companion adventure .

Fifteen years is a long period for a title to lay dormant but Majora’s Mask was arguably ahead of its time anyway, toying with a non-linear narrative and gently manipulating the way players went about inventory management and side quests.

This version boasts updated visuals, a revised save system, tweaks to boss battles and a much needed improvement to the swimming. Returning players will also note that various events have been switched, and certain items will be attainable at different times.

Both story and gameplay are in perfect synergy in that both hinge on time. Rather than the catalyst for your adventure being only thematically relevant in the task you go about, in Majora’s Mask it’s central.

Link has three (in-game) days in which to save the land of Termina, which is threatened by the the mysterious Skull Kid and the spectre of a grimacing moon that’s slowly crashing to earth.

Time is not on your side You need to find masks that imbue special powers and can even morph Link into new forms in order to defeat the four dungeons that lay ahead of you. This gameplay hook would be enough to carry you through on its own, as it freshens up everything, from exploration to combat. The game does an excellent job of introducing this mechanic right from the start, and it needs to as time is of the essence. Your first mask, which turns Link into a Deku Scrub, gives you a projectile long before you find the bow, the ability to hop over water and even a form of flight.

It sounds like it should lead to a lop-sided experience, too much too soon, but it’s imperative that Link be given more than his usual array of skills as the quest ahead is made all the more difficult due to the key gameplay mechanic - time. Those three in-game days are a countdown, at the end of which the world ends. To avoid catastrophe you’ll need to use your ocarina to reset the timer before it reaches midnight on the third day. However, in doing so you’ll not only be sent back in time, but you’ll lose consumable items, rupees and have to start again from the central hub, Clock Town. In short, it’s Groundhog Day, Zelda style. This was one key reason the game split opinion when it was first released. It evolves a Zelda game from slow, methodical progress and careful examination of puzzles into a gruelling race against time to complete things. Dungeons require a full three days if the last moments aren’t to be fraught with the danger of losing progress and having to repeat your actions; you’re not fighting the environment, you’re fighting the clock.

The update has, however, made some concessions to the modern gamer. You can now properly save in the middle of a three day period, there are more save points, and you can even (once you’ve found the song) skip to a specific hour. In a bizarre twist, I dare say these amendments, rather than unifying praise for the game, might actually reverse previously held opinions: those who cursed the panic-stricken race against the clock may end up liking it, whilst those who praised the hardline strictness will probably see these measures as too lenient.

The dungeons, so often the core of a Zelda game, were never the strong point of Majora’s Mask, largely because they weren’t places to dawdle, and the update doesn’t change that. The game is still more satisfying in the tasks that are outside of the key locations and it’s with the side characters that the real fun is had. The moments of exploration in this game aren’t really those in the confines of a darkened chasm with enemies around, but rather the bizarre interactions with a memorable side-cast and the way in which each mask helps you find new things, even after your main quest is complete. The improved bomber’s notebook is absolutely crucial. If you spent your time with the original writing things out by hand, this will be greatly appreciated. In it, you can keep tabs on all the events that are happening, and there’s a handy indication of who’s doing what and when, laid out in an easy to read fashion. If you have a new 3DS with the C-stick or the Circle Pad Pro then the game really is complete. It just feels right - particularly when every second counts - to be able to survey your surroundings in an easy manner.

Similarly, the bottom screen has been well utilised. It’s obviously handy for a map display but the inventory management is noteworthy, too, with the ability to drag and drop items onto two virtual buttons which reside along the right hand side of the lower screen, within easy reach of a thumb.

The changes open things up, and though there’ll always be purists who claim that the level of satisfaction is lowered without the strict adherence to the original ruleset the game was based on, you can still play it as you want. When a task is finished, check your notebook and see what you can fit in during the last hours you have left. Even with the concessions to a lower difficulty, at its best it has a non-linear take on progression that’s unique, and reliant on the user to navigate as they see fit. For all the interesting gameplay elements in Majora’s Mask, and the changes in mechanics that you can either see as opening the experience up or undermining it, it’s the atmosphere that elevates this game beyond merely an interesting experiment in design.

It’s perhaps the most un-Zelda feeling Zelda game you’ll ever play, full of subtle melancholy and moments that stick in the mind for their surrealism. The visual cues are there but they seem slightly off somehow, with simple transitions like putting on a mask eliciting a scream from young Link in a manner that's unsettling. The visage of the moon, wide-eyed and menacingly toothy, like a gargantuan grotesque, is perhaps the best symbol of the game’s twisted nature.

It feels like an alternative adventure, cultivated from the same concepts as the core series, but yet somehow outside of it. A collection of occasionally brilliant - but always quirky - ideas that didn’t fit elsewhere, but have been collated and woven into one very unique time-bending package.

Dawn on the first day

Majora’s Mask has benefited from a great update, with better graphics, an uncluttering of the main screen and tight controls. The time-based mechanic has had the edges softened slightly for a modern audience, but the argument that a satisfying game has to be stringently enforced in its rules isn’t one I ascribe to; the choice of how to play it is down to you, and either way, you’ll still run out of time.

The bizarre Groundhog Day-like experience of replaying the same events, meeting the same people and making incremental progress in different areas each time remains intoxicatingly novel; almost shockingly so, given the game is fifteen years old.

Few titles will have a central hook that ages as well, and fewer still will receive as definitive a re-release as this.