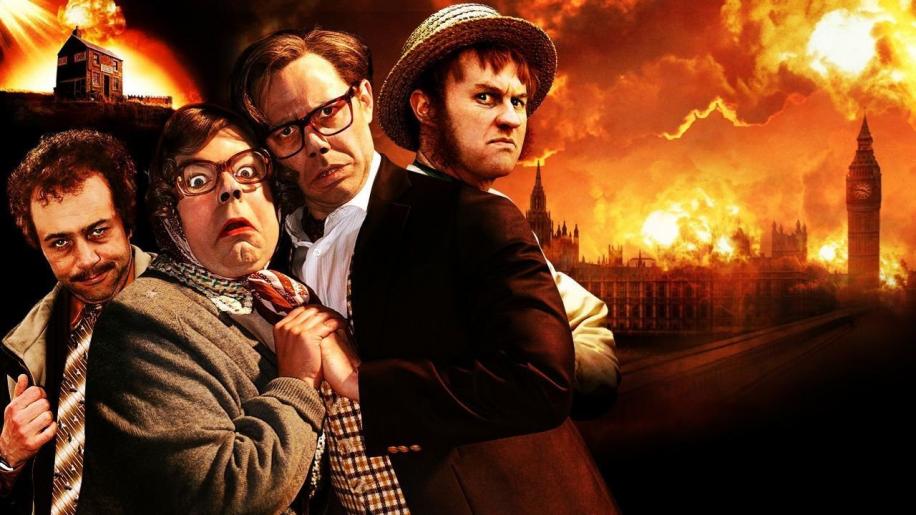 For a TV inspired movie, the image quality here is very good. The image is an anamorphic 1.85:1 transfer and is technically very good. As mentioned in the review, the image has a TV look to it, although detail levels are high and the blacks are good. The image quality shows up the grotesque nature of many of the characters and the griminess of their world. There is something quite disturbing about a close-up of Herr Lipp or the lipstick on the Reverend's teeth and this transfer does them justice. It doesn't match the best mainstream cinematic releases but is good in comparison to most of the TV inspired movies that I've seen. The sound is one of the plus points on this DVD - most people won't have heard the League of Gentlemen in 5.1 and this disc contains a thumping Dolby Digital 5.1 soundtrack to accompany the on-screen action. Despite the character based narrative used here you'll be surprised at the amount of surround and LFE action your system gets - the explosions during the apocalyptic scenes for instance will give your sub a nice work out. Audio commentary with Steve Pemberton, Jeremy Dyson, Reece Shearsmith and Mark Gatiss. As with most commentaries, your enjoyment will depend on how you found the movie - luckily because the League of Gentlemen are so involved in the production of their work their commentaries are usually better than most. This one is very upbeat as you'd expect from such friends talking together. I learnt a lot about the movie through listening to the commentary - especially understanding some of the more obscure references scattered throughout the movie.

The Making of The League of Gentlemen's Apocalypse (12m14s) - this contains the usual behind the scenes footage and talking head interviews where everyone pats themselves on the back but it did contain some detail on some of the special effects which was quite interesting.

The Real Royston Vasey (5m47s) - a look at the town of Hadfield where Apocalypse was filmed, introduced by Pauline (Pemberton). It shows the real town and explains why they chose the town to be Royston Vasey.

A Cast of Thousands (4m5s) - The actors discuss the characters that they have to play throughout the film and how they constantly had to change between roles.

A Gentlemen's Diary by Steve Pemberton (12m32s). This is an interesting little feature as it follows Steve Pemberton for the whole day on location, filming as 3 characters with a packed schedule and really shows what the guys went through each day to make this movie.

Also included are some deleted scenes (16m29s) - nothing particularly special here and unlike some recent releases there is no explanation of their context or why they were deleted.

The outtakes (9m34s) are included for completeness but have little return viewing potential.

Finally there is a gallery of production stills, a teaser trailer, theatrical trailer and a couple of Easter Eggs.

A special note of praise to Universal for including subtitles for all of the features, including the audio commentary which I found very useful. The League of Gentlemen's Apocalypse is a hard film to categorize - its starting point requires too much knowledge of Royston Vasey and the characters to really appeal to complete newcomers, yet because it does not follow directly on from the TV series in either plot or tone, it probably isn't as good as the fans would have really wanted and tends to hit a level of compromise that doesn't suit the extreme nature of their usual humour. Having said that, it is an impressive, ambitious attempt at turning a small scale TV show into a movie and in that sense is better than most of the previous efforts from its contemporaries. The DVD itself has good presentation, excellent sound and some reasonable features - overall one for dedicated fans only and even then, probably not as good as the best of the TV series.