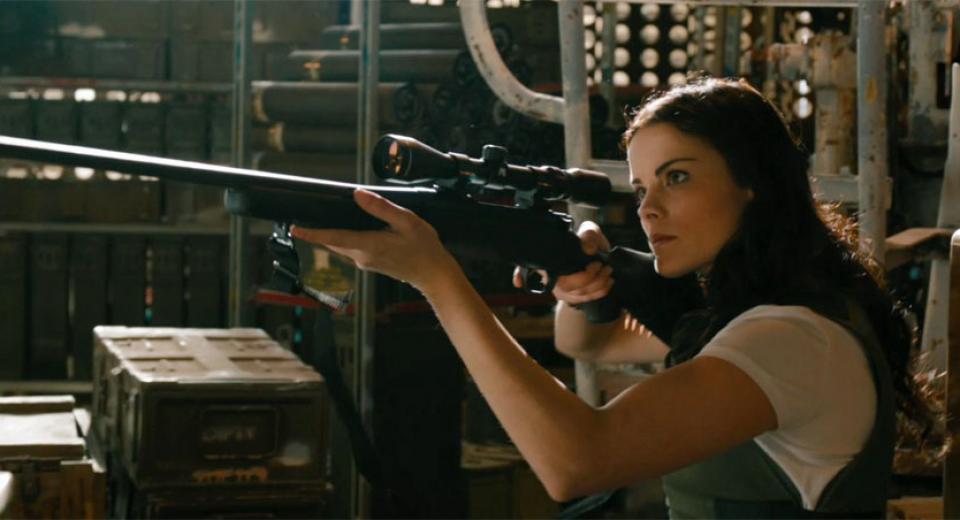 This UK release from Lionsgate sees the film presented at 2.35:1 via AVC.

The film has a rather annoying visual look that is dry, dazzling and bleached-out with either neon, headlights or spotlights, but mainly just plain squint-heavy sunlight that is hugely contrived and rather too stereotypical – the dusty, desaturated Black Hawk Down look - but this is still a terrific video transfer that replicates the image I saw theatrically with fine detail and accuracy. Perhaps a little too much accuracy if I’m honest, because that green-screen finale is all-too apparent in this transfer. I don’t recall it being quite so obvious at the flicks as it appears on disc.

I may have grown tired of this particular visual aspect, personally, but technically speaking, though, this is an excellent transfer. There are no issues with DNR, aliasing, artificial sharpening, banding or aberrant noise. But the image strictly adheres to a specific design aesthetic that favours Western-style shadows and a cold, hard glare. Although desert-set, the shoot was a chilly affair and the low position of the sun makes for some interesting lighting and camera angles. The image does, therefore, feel quite cold.

Detail is very good indeed. There are some tremendous close-ups. Arnie looks seriously weathered and leathered nowadays, and no attempts to mask this get by the scrutiny of the image, which hauls up as many cracks and crevices in that iconic face as the frame finds in the rugged landscape beyond it. Wounds are also sharply rendered. The working parts of the various firearms are clinically revealed, and if you are anything like me then you will be salivating over the cascades of ammo and the locking and loading of 7.62 rounds in Sarah’s sniper rifle. That's if you aren't already salivating over Sarah! Eyes are bright and clear. Hair is awarded finite delineation, and sandy bursts of bullet-kicked dust are equally as sharp. The distant landscape is also clean and crisp, and the buildings and windows and streets of night-time Vegas (it isn’t really Vegas, and you can tell, but that’s irrelevant) are reasonably detailed and all of this is conveyed with a better than average sense of depth and three-dimensionality.

There are bold colours offered up too, despite the high contrast glaze. Blood might not be theatrically hued and veers far more towards a realistic shade, but it still stands out proudly. The colours of the vehicles are arrestingly bright and bold, and deliciously capped-off with a pleasing metallic gleam. Arnie's pilfered red sports car is really resplendent. The yellow of the school-bus-cum-war-wagon is reassuringly vivid, the muzzle-flashes and the relatively few explosions just as impressively vigorous. The dusty beige cop uniforms of Arnie’s posse are suitably earthy, and I love the way that Dinkum’s bright orange flare-pistol stands out against the image, too.

On the darker front, you should find that blacks are solid and stable, but they are not impenetrable. In fact, the hi-def digital photography gives them a softer feel that can detract from the night-time sequences, such as the firefight that reveals the goons’ attempts to build the border-straddling bridge. There is nothing wrong with them, you understand. It is just the photography and the processing that denies them that stygian depth that would give some scenes more of an edge. Lionsgate’s reputation for providing their action movies with supreme kick-ass sound-mixes on Blu remains untarnished with a blistering DTS-HD MA 7.1 track that pulls no punches and supplies a wealth of room-battering audio devastation that is bound to satisfy the adrenaline-junkie lurking within everyone. With super fast cars hurtling down freeways, copious grinding, high-speed impacts, all manner of destructive firepower unleashed and a keen sense of wraparound immersion, The Last Stand sounds bloody good. And your neighbours may well back me up on this.

Dialogue is absolutely fine. The forgettable score comes across well. Separation, depth and nuance are not neglected, and the whole track sounds crisp, solid, detailed and alive.

The really good stuff, as you would expect, comes when things get all dangerous and deadly, and the bad boys come out to play.

This is a film about guns and cars. And everyone in your street will know that from the start. Some ace ballistic reports boom and blast their way around the full 7.1 set-up. Ricochets tumble and whine at wild spinning angles. Movement across the speakers is smooth and credible. The severe gut-punching high-velocity rounds really kick through the air with a convincing mini-sonic boom, and some single-shots carry a cool echo on the wind. There are no wimpy gunshots here, thank you very much, and even if we aren’t burying ourselves away from immense flurries of fire from multiple weapons as in The Expendables, say, we still feel the power and recoil from extremely impressive one-shots and mini-bursts of auto carnage. Detail even goes as far as to denote the strangled thud as bullets rip through metal with a variety of authentically aggressive acoustics. Aye, this is a fine and furious presentation of mayhem.

The gut-rumbling rev-rush of Cortez’s souped-up Corvette provides ferocious sub-roar and speaker tremors. I love the staccato rattle of the corn-cobs pelting the windscreens as the cars chew their way through the corn-fields. Incidentally, when the two vehicles slow down to a snail's pace and play cat 'n' mouse, there is some terrifically realised snapping and cracking of the corn-stems as well. Strong left to right whooshes (and vice-versa) also bring grins to the face. Helicopter rotors are positioned well, with distinct elevation and meaty whup-whups. Bodily impacts also smack home. There really isn’t anything more to say on the matter ... other than ....

This UK edition appears to contain all the supplements that will be found on the US release. Commencing with a pretty enjoyable making-of called Not In My Town that lasts for 28 minutes, Lionsgate offer a reasonable, though fairly typical-sounding batch of fluffy, back-slapping material and action-fare add-ons.

And yet, this is actually pretty cool.

The making-of makes it clear that there was a lot of fun and candid on-set antics that kept the whole shebang running smoothly, and the little feature is nowhere near as patronising as most of its ilk tend to be. All the main actors, bar Whitacker, get plenty of air-time to discuss the guns, the film, their characters, Arnie, the guns, Arnie, and the guns. And then some more about the guns. And Arnie. There is a fair amount of time devoted to the fighting, and we get to see Arnie learning his moves and going through the motions.

We even get a separate tour of The Dinkum Firearm and Historic Weaponry Museum and get to drool over the props and the real goodies that have been bestowed the production. A potted history is given for each of the guns, and some are shown being put through their paces on the range. Me likey.

Jamie Alexander and Johnny Knoxville were given video cameras to haul around during one day’s shooting in order to capture the good-natured banter, the scene preparations, and the personalities populating the set. This could so easily have become gag-inducing, and yet the ten-minute assemblage of footage is quite entertaining. We even see the actual shooting of Dinkum blowing up a bad guy with a flare-pistol. All of this stuff is covered in Actor-Cam Anarchy.

There is an interesting slew of Deleted and Extended Scenes. Now, even with this said, you can plainly see why most of these scenes and alterations were dropped or shortened. A large sequence details the early arrest of Frank Martinez that Ray makes after discovering he has broken into the pharmacy. Arnie is working hard in this scene and it is nice to watch for that alone, but it would have been a dreadful time-waster had it been left in the final cut. Other scenes add snippets here, or alter things slightly there, and there is one entire action sequence in which Cortez uses his car like a skateboard to circumvent a police trap that would have been great had it made the final cut. As it stand, it is presented with a combination of live-action and previz footage.

There is even much better alternative line between Arnie’s Sheriff and Luis Guzman’s Deputy Figgy. Set in Dinkum’s fine weapon-barn, Figgy is hefting the big Cimmerian-type sword and Ray comes out with a classic – “Who do you think you are, Conan the Barbarian?” – which is much, much more satisfying than the actual line used in the film about Figgy being in the Crusades, itself a possible reference to the long-mooted, though now eclipsed historical epic that Arnie once had planned.

Cornfield Chaostakes a detailed look at the climactic car chase between Ray and Cortez, paying close attention to the stunts and specialised rigs to enable the cinematography. Decent.

I expected very little from this selection but, in truth, I quite enjoyed it.

Well, thank Crom that Kim Jee-woon’s smoothbore actioner isn’t Arnie’s “last stand”, and that he will be up and running with more brawny romps soon because, in many ways, this proves itself to be something of a non-event. The Oak was thoroughly lousy in the poor Expendables 2, and although considerably better here, he still appears to be slightly uncomfortable and slow, and less engaging than he really ought to be. Whereas Stallone has never really missed a beat, and has exploded back into top form ever since his Rocky Balboa and Rambo 4 double-whammy, and even managed to come up with the goods in the laid-back yet violent stride down the wrong tracks of New Orleans in the Bullet to the Head, which I would say has the edge over this, Arnie has yet to prove himself worthy of the screen-dominating star-billing he could previously lay claim to. We all love the big guy, but we shouldn’t simply be content for him to strut out by-the-numbers, lesser material like this because we are still revelling in nostalgia for the good old days. So, age notwithstanding, I’m afraid that we expect greater things from his next offering.

Peter Stormare is ludicrously bad and just why the hell is there so much screentime allowed for Whittaker and that banal and utterly uninteresting federal chase? The action is, ironically, pedestrian, and the strong bloody violence doesn’t work with the freewheeling tone of the rest of the film, often striking a bum note against the character-based humour and the quirky, laidback banter.

And yet, when all said and done, there is still something quite likeable, and almost cosy about The Last Stand. My initial indifference with it has melted, allowing me to warm to the characters and the scenario to the point where I know accept the movie as a lightweight Saturday afternoon matinee type of deal. There’s absolutely no reason why you shouldn’t feel the same, once you’ve given it a chance.

Lionsgate provide a very good transfer. The contrast is blown-out for that dusty, high-glare sheen, but detail is excellent. And there is no messing about with that alluring 7.1 audio track. Lionsgate can sit back in the knowledge that they are still at the top of the boom-boom-shake-the-room soundmix league, although this wraparound won’t challenge some other madcap mixes out there. The extras are actually good fun.

Being cynical, I would suggest that this is Arnie on his “Last” legs, but we know that he has some very interesting productions in the pipeline, not the least of which is his team-up with Stallone in the now re-titled Escape Plan (which is a very poor alteration from the original moniker of The Tomb).