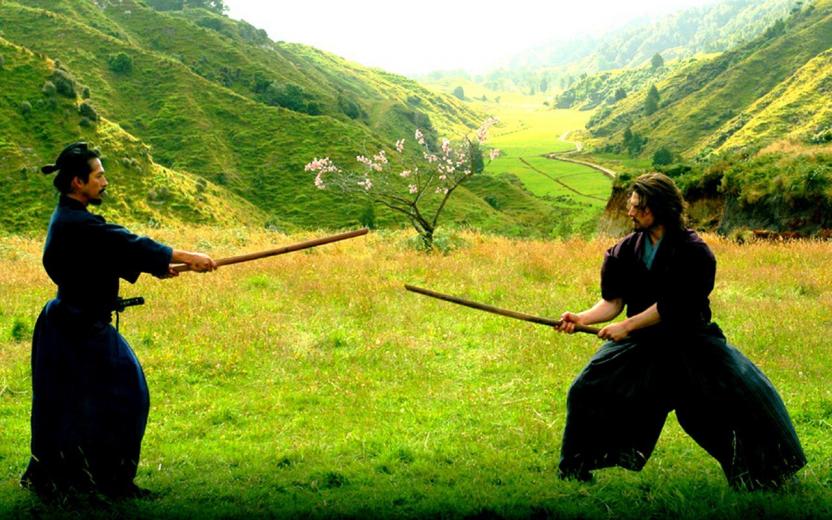 Presented in 2.35:1 anamorphic widescreen the image is stunning and captures the beautiful cinematography in all its glory. Colours are rich and well saturated creating a wonderful Japanese portrait feel. Blacks are solid and shadow detail for the most part is good. There are no problems with digital artefacts and edge enhancement while visible in bright scenes is not distracting or overly noticeable. Skin tones however have a contrast and brightness which at times felt unnatural and probably a result of lighting on set. The overall image also lacks fine detail and definition with a softness that appears to be intentional, the film doesn't suffer that much because of this with close ups on faces still holding good detail but the overall picture has a soft focus feel.

The Dolby Digital 5.1 soundtrack is as you would expect aggressive and bass heavy. The score sounds dynamic with wind and string instruments surrounding the listening position. Battle scenes have an excellent bottom end kick to them with lively split surround effects and deep meaningful LFE use. Dialogue remains rich and intelligible throughout and the sound mix has an overall epic feel. Maybe not quite as engaging as the recent Master and Commander track, but the presentation here is very good indeed.

One word describes the extras, Hype. There are plenty of featurettes and interviews but after watching the first few you begin to suffer from the repetitive and back slapping problems. The director's commentary track is lively and informative, the featurettes have good behind the scenes footage but are little more than promotional films with all the PR fluff present. There are interviews with Cruise and the Director, a feature on set building, costumes, deleted scenes, more interviews, a History channel documentary which is little more than a promo for the film and tells us Hollywood have made the Samurai the good guys, well Duh. Finally we have premiere footage from Japan, a section on fighting techniques and DVD ROM features. Overall it looks extensive but really most of what is seen is repeated a few times and most of the features are little more than PR material.

Samurai sets out to be an epic and almost succeeds with good performances from the cast, stunning action and cinematography and a rousing score. The down sides are a Hollywood sheen over history and an attempt to manipulate the audience. The film is flawed but enjoyable all the same, just switch your brain off.