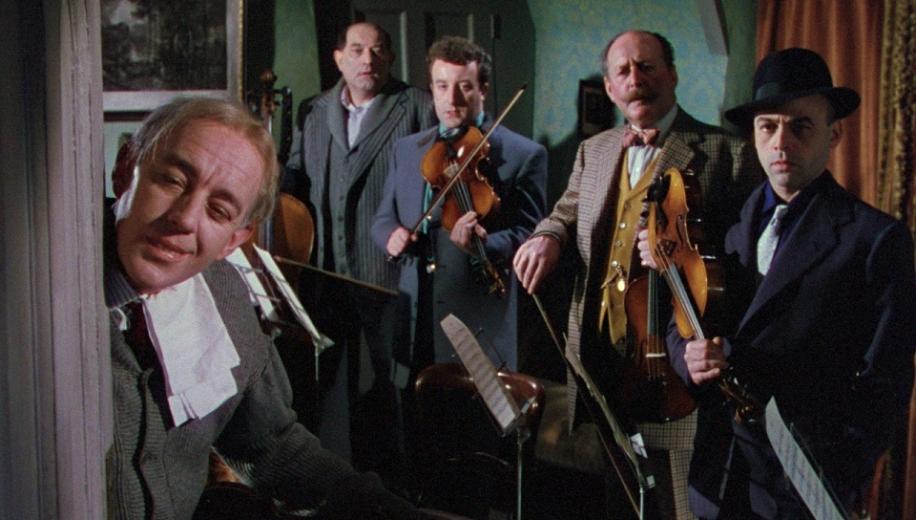 Simply try, for one hour, to behave like gentlemen

Who hasn’t heard of The Ladykillers? Along with The Lavender Hill Mob and Kind Hearts and Coronets, The Ladykillers is often regarded as one of Ealing Studios finest comedies; telling the story of a group of hapless criminals becoming undone by an old lady has been re-invented, re-imaged, re-told and reproduced; but never equalled. With an all-star cast including Alec Guinness, Cecil Parker, Peter Sellers, Herbert Lom, Danny Green, along with early appearances of many of the up and coming stand-ups of the day, including Frankie Howerd and Kenneth Connor, and with the magnificent Katie Johnson as Mrs Wilberforce, plus many other faces, the film really is a who’s who of British acting/comedic talent of the time.

Who hasn't heard of The Ladyillers?

Not only that, but with the extensive location shooting in and around London’s Kings Cross and the surrounding landmarks, the film can also be regarded as a time capsule for how a metropolitan city grew and developed after World War II. But it is the story that keeps bringing people back and why the film endures. Here in this 65th Anniversary release, with a host of new extras and fully remastered, this timeless classic can be enjoyed by a whole new audience.

The Ladykillers was shot on 35mm film using a Technicolor Three-Strip Camera. The source for this release was made from the original camera negative which was scanned at 4K resolution and using a combination of manual and automated techniques to clean up issues (reportedly 1000 hours' worth of restoration) which was then utilised for the creation of this Ultra HD Blu-ray release. The disc presents a native 4K 3840 x 2160p resolution image with a choice of aspect ratios: 1.66:1 and 1.37:1, and uses 10-bit video depth, High Dynamic Range, and is encoded using the HEVC (H.265) codec. We reviewed the Region free UK Ultra HD Blu-ray release of The Ladykillers on a Panasonic 65DX902B Ultra HD 4K TV with a Panasonic DMP-UB400 Ultra HD Blu-ray player.

Detail, is quite stunning; skin texture and clothing weaves are a given, but close ups are picture perfect, check out the watch or the instruments, and then look to the location shooting; how keen are the advertising poster boards, car number plates, cobbles in the streets etc.; the feathers of the birds, the various knick-knacks in Mrs Wilberforce’s old house, newspapers – it’s quite astonishing considering the spherical filming process which introduces its own softness but this is nothing to do with the transfer process.

Takes some getting used too

The WCG and HDR really add a depth to the colours, the blues of the vans, the reds of the trains/post boxes/telephone boxes – pure defiance – while the green of the wallpapers, indeed any of the garish décor, or even the parrots, have a depth of colour that the Blu-ray cannot match. Great care has been taken to ensure that the colours still match the original intent, only with more depth, and they do. One thing to say is that the image is extremely bright, I mean it always was, but the HDR really pushes the brightness; towards the later parts of the film it does darken down, reflecting the gang’s motives, but I dare say it will take some getting used to.

Black level is good, while the film was never intended to have many, there is still a decent depth to frame, while the white scale positively beams.

Digitally, there are no compression issues and the source is magnificent, considering the age and filming style and whilst vestiges do remain, it is far superior to the 2010 restoration. Grain is well managed as well. When first spinning, as alluded to above, the picture is very bright, and seems to exhibit a ‘digitised’ look, especially regarding flesh tones, but closer inspection reveals nothing sinister, it’s the intent of the original filming process, just pushed to 11 with the application of HDR and, as the film progresses, it becomes quite normal.

Just the one track, and it appears to be the same as the 2010 restoration, an English DTS-HD MA 2.0 mono. A clean and clear track that has been cleaned up to reveal sharp and crisp audio that, even at reference, does not become shrill or distorted, neither is there any background hiss. Dialogue is natural sounding and dominates the track, though the score does its fair share.

... neither is there any background hiss

Bass is very limited indeed with only the climactic train passes making any impression from the sub, otherwise everything sits fairly and squarely in the mid to high range. This is no bad thing as the mix is layered well to give the correct amount of respect to each element. A functional track that gets across its information in a clear and precise way.

Included are a number of new extra features, spread over both the UHD and the included Blu-rays.

Investigating the Ladykillers – Featuring new and archival interviews, new for this release.

Colour in the Ladykillers: A New Interview with Keith Johnson - New for this release

Behind the Scenes Stills Gallery

Audio Commentary – With film historian Philip Kemp whose effortless talk about the production is both anecdotal and technical until he runs out of steam and seems to just describe what’s happening on screen after about an hour.

Locations Featurette – Short feature that highlights the main location shoots of the film compared to how they look in 2015; remarkable how different or how little has changed!

Audio Interview – With producer Tom Pevsner and runs for 90 minutes as he regales us with tales from his life related to the film; he does sound rather old.

Audio Interview – With cinematographer David Peers and also runs for 90 minutes and follows a very similar path with his own recollection of his career and the film; he sounds like a favourite grandfather and rather sprightly.

Forever Ealing – Excellent and affectionate 50 minute documentary original screened on Channel 4 and takes us through the years of the studio, narrated by Daniel Day-Lewis. Not Ladykillers specific but is nevertheless a very entertaining watch.

Made in Ealing – BBC Omnibus feature, from 1986, featuring interviews with Alexander Mackenrick and William Rose.

Often regarded, and rightly so, as Ealing Studio’s greatest comedy, The Ladykillers celebrates its 65th Anniversary with this new 4K Blu-ray. The story of a bunch of hapless, small time crooks who unwittingly enlist the help of a sweet, but meddlesome, old lady to assist in their robbery and eventually become undone by her has been retold many times over the years. But the original is a pure classic, with superlative casting, wonderful direction, class editing, outstanding performances and a story to die for, it is little wonder that the film has endured so well.

Story to die for

As a 4K UHD set the package is amazing; the native 4K picture has had a terrific clean up, is bright, extremely well detailed and shows a depth of colour never seen before, while perfectly capturing the cinematic process. The DTS-HD MA 2.0 track appears to hail from the 2010 re-master and is clear and precise without any hiss or distortion. The extras package has been expanded upon with a few new features as well as including a host of those previously available and the collector's set has even more goodies!