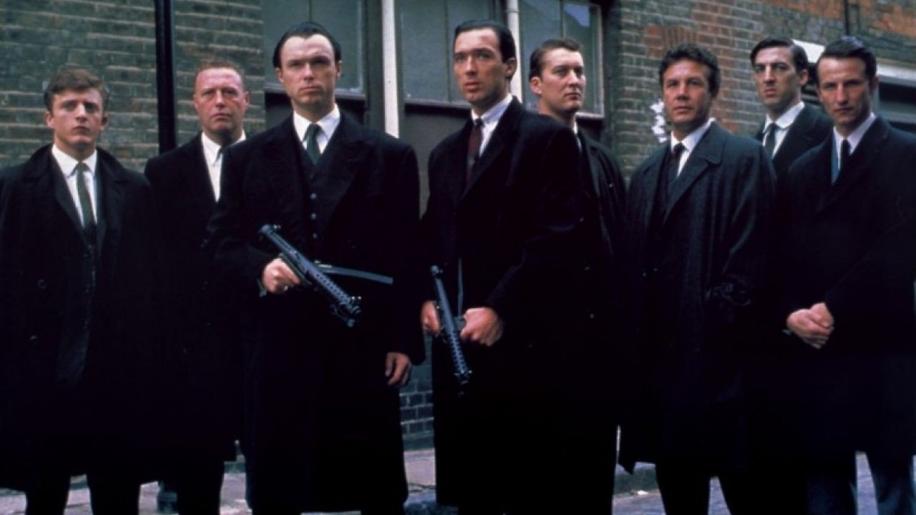 The Krays is nicely presented in a 1.85:1 aspect ratio anamorphically enhanced widescreen transfer. Although it looks quite dated, I think that this was partially intentional because of the Sixties (and earlier) settings. Detail is reasonable throughout, with sporadic scenes that exhibit more softness than others and varying levels of grain. The colour scheme is relatively limited, again because of the Sixties East London locations, but it certainly still looks fairly authentic. Blacks are of reasonable depth and the transfer exhibits no print damage whatsoever. Unfortunately, all we get here is a fairly basic Dolby Digital 2.0 soundtrack, which distinctly restricts the whole feel of the score and sonic elements. The dialogue is perfectly audible from the frontal array and is probably the aspect of the track that suffers the least from the 2-channel limit. The effects are not that common, a couple of car screeches and gunshots but nothing particularly to write home about - still it would have probably sounded better had it been spread across the rears. The biggest damage by the lack of a new 5.1 mix is probably to the score, however, because it runs almost throughout and could have potentially sounded much better. As is, this is quite a restricted aural presentation, especially for a special edition release. First up, we get an Audio Commentary by the Director Peter Medak and the two Stars, Gary and Martin Kemp, the real-life brothers who played the Kray twins. The Kemps talk about how they secured the role and they all discuss the strong script that provided the backbone for the drama. Obviously since they had not seen the movie for quite some time, a great deal of their comments take the form of praise, but there is still a fair amount of anecdotal and trivial information offered, including comments about how Tarantino acknowledge copying the gangster style of dressing in black suits for Reservoir Dogs and the tips that the Kemp brothers received from real people who knew the Krays. It is nice to have the three most important individuals in the production giving you an insight into it and this is a very good extra to have on hand.

The Krays: Flesh and Blood runs at nearly an hour in length and takes an in-depth look at the real Kray twins. Featuring interviews with real individuals who knew the Krays, the Documentary explores their psychosis, looking at schizophrenia and the violence that motivated them. There are still photos from their long and powerful reign, along with their inevitable demise, as we see their history plotted out in more detail than even in the main movie itself. Fans of the Krays, or even of the era itself, will be interested in the wealth of information that this comprehensive offering provides. There is also a Trailer for the main film itself, rounding off the special features on the first disc.

It should also be noted that the menus on the first disc are particularly innovative, kind of interactive old-fashioned newspapers, with moving pictures from the movie.

The second disc is devoted to the two-hour long Documentary, The Krays: The Final Word. This comprehensive extra spends a huge amount of time talking to Reggie Kray himself on what was to be his death bed (this was his final interview, post release but before he died). We get still shots of the Krays in their youth: as boxers, with their infamous mother and the rest of their family and, of course, on the newspaper front pages. This is one of the most interesting documentaries / interviews that I have ever come across, primarily because all of the tales you hear out of this guy's mouth are more than likely to be pretty close to the truth. The fights, the gang moves, their family life and relationships, it's all here in superb, gripping detail. If you are interested in the crime history of London, in particular The Krays themselves, then this is probably of even more value to you than the main movie itself. Recommended viewing.

Finally we get a series of Biographies of those involved in the production, a Moving Map of 'The Kray Manor', i.e. the area they controlled in London, that takes you around the various locations and offers little bits of information on them, along with the Order of Service from Reggie Kray's funeral. The Krays is a classic British gangster drama, painting an emotional tale of two of the most violent and powerful criminals that this country has ever known. Presented with quite a good transfer but a slightly disappointing soundtrack, along with extras that provide all of the background information that you could possibly want to know about the production and the real-life individuals themselves. Those who have seen and liked it are likely to want to pick up this definitive edition and those who have not encountered the phenomenon of the Krays should definitely give it a rental.