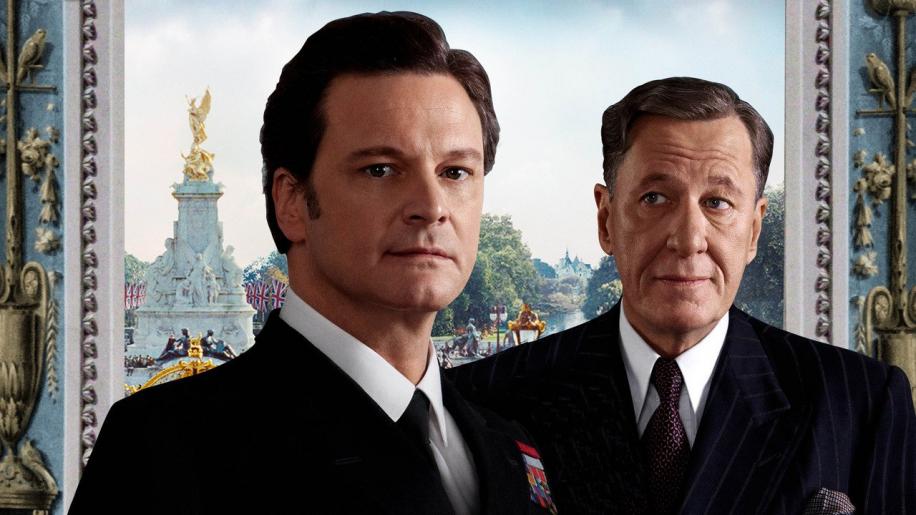 Ladies love him, but men think he’s pretty stuffy, and nobody had ever really lavished him with praise about being a great performer, BBC’s very own Mr Darcy himself, Colin Firth, has been on the scene for a couple of decades now, keeping up appearances in numerous Brit romantic comedies along the way – those Bridget Jones films, Love Actually, and even Mamma Mia! – but it’s only been over his last two films where, all of a sudden, there’s immense Oscar buzz surrounding the guy. First up there was the indie flick A Single Man, a painstakingly slow but indisputably insightful look into one climactic day in the life of a 60s college professor who is still in mourning over the tragic loss of the man he loved. Some would call it sombre and reflective, others downright depressing; some would say its acute observation of the workings of the human mind makes for compelling viewing, others would regard it as little more than pretentious drivel. Personally, I didn’t enjoy the movie, but I can see why it pleased the art-house crowd, and I can’t deny that Firth provided a performance unlike I’d ever seen from him before, much deserving of both the Oscar Nomination, and the Bafta Award that he secured. He followed this up by starring in the historical drama, The King’s Speech, opposite the always-great Geoffrey Rush, a movie which cements Firth’s position as one of the underrated Brit actors of his generation, and reinforces this very different side to the playful rom-com expert that has only become apparent in these, his more mature years.

It’s 1925 and King George V has just become the first British monarch to make a radio broadcast, presenting a Christmas address. He has two sons, the younger of whom – Albert, known to those close to him as Bertie, the Duke of York – has a disabling stammer, which makes his public speeches excruciatingly embarrassing; often delivered poorly in front of thousands of shocked members of the public. Worse still, ashamed of his own speech problem, Bertie is too shy to risk even telling his own daughters bedtime stories. When his elder brother, David, succeeds to the throne, Bertie is forced to do something about his speech impediment. At first the doctors advise extreme practices, and he becomes yet further disillusioned, but his loving wife sets up a meeting with Lionel Logue, an Australian speech therapist. Although he is sceptical about the man’s unorthodox approach – and resistant to ignoring his closest advisers’ recommendations to avoid ‘mingling with the ordinary people’, Logue gradually proves his worth and garners the Duke’s trust. As his brother, the now King, lets his duties to the throne fall by the wayside in favour of his ill-advised relationship with an American divorcee, it becomes apparent the Duke may have to step up. Will Logue be able to groom the man in time to take his stand in front of the public, and provide the much-needed backbone the country needs as World War II breaks out?

The King’s Speech was made for a shockingly low $15 Million, essentially an independent production which was initially designed for a limited release but received so much positive praise that it secured a full mainstream release and reaped the subsequent rewards, 30-fold and counting. With no grand set-pieces, no Blockbuster effects, this is a totally character-driven affair, and thus almost all of the credit for its success rests on the lead performances. At the head of the cast we have Colin Firth, who simply excels as the future King of England. It’s a subtle, well-observed portrayal, well-researched and perfectly delivered. He’s a very human Royal figure, extremely sympathetic with his malediction, and at the bullying hands of both his oppressive father and his brash, selfish and insensitive brother. Firth plays him with determination and strength, albeit in a quiet, reserved fashion, without any of the grandstanding that you might expect from such a prominent figure. His performance here simply makes us forget the arrogant Darcy of the English landed gentry and instead focus on the anguished soul of a second son in a repressive Royal Family, thrown, as he is, into the war-time limelight, and forced to perform in a very public role. Firth does it so well that you are riveted by his character’s monumental struggle, not only to overcome his disabling stammer but also to face up to its deep-rooted causes. And every step of the way we are not only cringing at his efforts, but willing him on, and cheering inside for every small, desperate success. Seriously, if this and A Single Man are truly what Firth is about, it’s a shame that his real talents didn’t get discovered sooner.

Even though he may well have been able to carry this movie single-handedly, he thankfully doesn’t have to, with the likes of Geoffrey Rush, Helena Bonham Carter, Guy Pearce and Michael Gambon at hand to help out. They all do a fine job, but, out of this collection, it’s Rush who stands out – as you would only expect from the man who was Cate Blanchett’s top advisor in the Elizabeth movies; played The Marquis de Sade in the acclaimed Quills; and won Awards for his portrayal of Peter Sellers in the TV drama, The Life and Death of Peter Sellers. At home in historical roles, as real-life individuals, Rush continues the trend here, and is powerful opposite Firth’s troubled protagonist.

Helena Bonham Carter makes for a suitably loyal and positively feisty wife for Bertie, supporting Loque’s maverick therapy approach wholeheartedly; Guy Pearce has made a name for himself playing fairly unlikeable characters, and continues in this trend as the reckless elder brother; and Michael Gambon brings us his usual indisputable presence, adding weight to the important role of the elder King George V. Also worth noting are Timothy Spall, in the important role of Winston Churchill – the historical character that is far better remembered than any of the Royal entries during this period – and Derek Jacobi, as the Archbishop of Canterbury, who is another adviser that recommends against this daring form of speech therapy. Still, the majority of these actors are merely present to offer decent support to the central character, and his vital companion, Logue.

And it’s their interaction that drives the film’s terse, snappy exchanges, both poignant and even somewhat witty, particularly in the way Logue has to coax smooth words out of a stuttering Bertie, which often involves getting the normally restrained and inhibited then-Duke to swear like a trooper in order to release long-pent-up emotions and smooth out his stutter. There’s an understated humour that runs through their reluctant relationship, as well as a mutual respect, however much it goes against the grain in terms of Royalty vs. ‘ordinary people’. Their would-be friendship is actually quite touching, but not in a sickly-sweet saccharin way. And at the end of the day, in many respects, it is a pretty uplifting film – a King being the underdog here, as he tries desperately to overcome a crippling disability – and there’s nothing like rooting for an underdog. And root for him you do, especially during the tense, almost nerve-wracking moments where you’re waiting to see if he will manage to achieve a smooth delivery – at each critical juncture, including having, at one point, a quarter of the world’s population listening, you’re on tenterhooks to see if he’ll pull it off.

The King’s Speech doesn’t have any grand effects, doesn’t have a big budget, and doesn’t rely on intense, suspenseful action, or heart-string-pulling romance to carry you through the proceedings. It’s a low-key effort driven by competent Direction (by Tom Hooper, the man behind The Damned United), a strong script and an even stronger cast, led by an on-top-form Colin Firth, partnered with the ever-reliable Geoffrey Rush. You’ll want to see this film for their performances more than anything else, and if you do take a chance on this rich period piece, you’ll likely be surprised by the powerful, moving and uplifting tale. Recommended.

The King’s Speech may not be everybody’s cup of tea, but it’s a well-made, well-researched (reasonably historically accurate, for once) period drama which boasts decent Direction, a strong script, and a strong cast, led by Colin Firth – at the absolute top of his game – and the ever-reliable Geoffrey Rush. Character and dialogue-driven, you watch this more for Firth’s superb central performance than anything else, and it is an interesting way to flesh out an oft-forgotten character in British history. For fans of period dramas, this one will leave you feeling well rewarded – just don’t expect action, suspense, romance or big budget grandeur. This one has stage-play written all over it, although you shouldn’t underestimate just how compelling such dramas can be. Recommended.