Pete Davidson paints a believable, if not always likeable, portrait of arrested development and mental illness 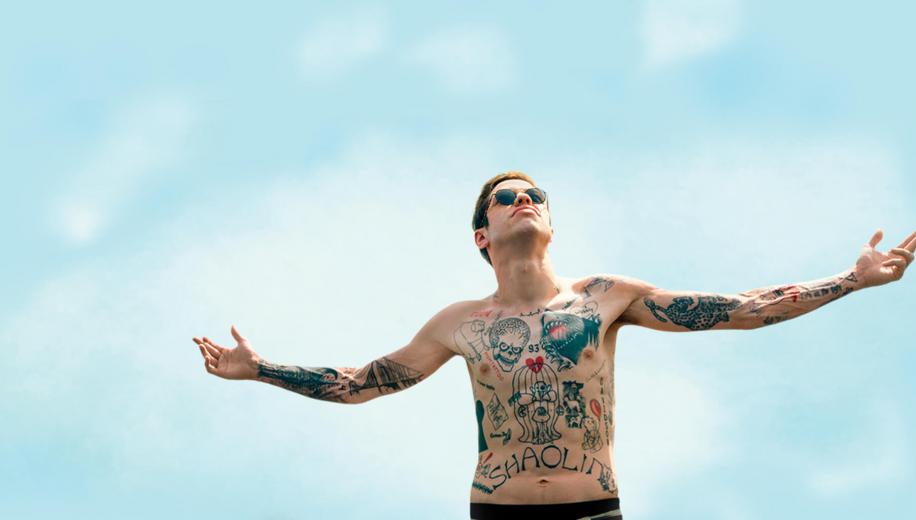 The King of Staten Island Movie

Judd Apatow’s latest film explores the life of a twenty something man-child as he comes to grips with the reality of growing up. Sound familiar? You might be surprised.

Scott Carlin is a twenty-four year old kid. He lives at home with his mom, spends all of his time in a friend’s basement smoking (and occasionally dealing) weed, refuses to commit to anything more than just sex with his best friend Kelsey, and has unrealistic dreams of opening a “tattoo restaurant”. He’s not sure what’s holding him back in life but, without facing his grief, he’s happy to blame the experience of losing his father, a heroic firefighter and Scott’s idol, when he was just seven. As Scott drifts selfishly along, barely aware of life passing by but hyper aware of his own shortcomings, it becomes clear to him that maybe something has to change.

The film stars and was co-written by Pete Davidson. Davidson, sort of famous for being an SNL comedian but mostly famous for having some very public break ups and break downs, is a ‘complicated’ guy. He’s often described as ‘difficult’, ‘unpredictable’ or even ‘crazy’. All of these are, of course, euphemisms for the mental health condition he struggles with. Davidson has been open about his diagnosis of Borderline Personality Disorder for a long time and has sometimes dealt with it in the way that many sufferers do: by burning brightly as a magnetic personality while using drugs and alcohol as a crutch to continue to be able to do so.

The film, without blatantly labeling itself as such, is a study of how mental illness can send ripples across entire families and how damaging it can be when you aren’t able or refuse to fully deal with your baggage. Pete Davidson, almost constantly in the public eye for self-destructive behaviour, seems self-aware enough to know that in order to create a sympathetic link between the audience and the character, it’s important that the love and support within the family comes through stronger than Scott’s more difficult personality traits. The constant cycle of worry, anger and forgiveness that Scott’s family has to repeat is demonstrated early on in the film, and it is powerful, but isn’t always as effective as it could, or should be, and that’s mostly due to the burden of its inevitable ‘goofball grows up’ plot trajectory.

What’s more consistently effective is Scott’s evasiveness when talking about his condition. Unwilling to give a straight answer, more comfortable to sit and play dumb, quick to move into catastrophising and elaborate explosions of low self-esteem, the way the character is played in relation to this issue is nakedly honest, funny and uncomfortable.

The most obvious point to make is that your link to Scott, and your ability to buy in to the movie as a whole, is entirely dependent on the time you have for Pete Davidson as both person and actor. His ramblings and wildness are kept in check out of necessity but so, it seems, are his more incisive and witty observations. The film is very funny, but only intermittently. To play Scott, Davidson’s sense of humour is sometimes awkwardly clipped to childish copycatting and broad-strokes observational comedy, which undermines the few occasions where he expresses his own thoughts, which are capable of being profound and genuinely funny. Sometimes he even seems to be resorting to schtick: a kind of “have you ever noticed” series of Seinfeldisms that don’t really fit with the tone of the rest of the film.

The supporting cast are the real crown jewels. Marissa Tomei very convincingly plays Margie a very different sort of New York parent than the one we recently saw caring for Peter Parker. The way she is able to move between fiercely defending her childish son and furiously laying into him in the same breath is compassionately studied. As the emotional grounding of the film, it’s disappointing that she gets left behind somewhat during the final act of the film because, aside from Scott’s sister, it’s through her eyes that Scott is made understandable, or at least bearable, in some of his worst actions.

Comedian Bill Burr playing opposite her as Margie’s new boyfriend and an ex co-worker of Scott’s firefighter dad, is also a perfect fit for the role. A more subdued version of his stage persona, he plays his bottled frustrations and righteous indignation just within the scope of keeping the character believable and funny even as he goes through the usual motions of jackass boyfriend to heartfelt surrogate dad. There’s also a particularly fun cameo from real-life ex-firefighter Steve Buscemi as the Firehouse senior.

there are long stretches of the movie which meander and plod

For all its good intentions, landed jokes and nicely rounded characters, the film suffers a pretty big setback: its running time. At a hefty 145 minutes, there are long stretches of the movie which meander and plod aimlessly around. Subplots which are introduced as a blend of comedy and character growth but which are then left hanging. A lot of time is spent around a fire house in which some scenes seem repeated in quick succession with minor variation to no particular effect. For anyone not buying into the charm (or “charm”) of the main character, patience is likely to be tested. It’s also pretty flat looking, something that’s a bit surprising from Oscar winning cinematographer and Paul Thomas Anderson collaborator, Robert Elswit.

It’s always refreshing to see Judd Apatow moving away from the first world problems of affluent white thirty-somethings and with the Staten Island setting here there’s opportunity to explore his signature blend of man-child character growth and raunchy, gross-out comedy with a little more weight and depth. Unfortunately, it’s an opportunity which is only partly realised.

Co-written by lead actor, Pete Davidson and publicised as semi-autobiographical – his father really was a firefighter who died during the rescues on 9/11 – the structure falls well within Apatow’s wheelhouse, but in many ways the script does demonstrate a deeper understanding of the lives and problems of regular people that could believably be attributed to Davidson. Within a typical Apatow story arc there will usually also be a full redemption, a turn-around that ensures a happily ever after where a Seth Rogan-type (often actually Seth Rogan) can be forgiven all his past screw ups now that lessons have been learned. In The King of Staten Island, however, Scott remains conspicuously on the hook even as the credits close. It’s tempting to interpret this as a type of self-awareness from Davidson and it’s refreshing to see such a ‘complicated’ character learning, changing, sympathised with, but ultimately accepting responsibility for their actions and carrying that with them.

The film is a tough nut to crack. If someone who wasn’t Judd Apatow had co-written and directed this movie, what we might have is a heartfelt and insightful comedy about the difficulty of living in relative poverty with a mental health condition. It’s not that The King of Staten Island isn’t that, it’s that it isn’t completely that. I wish it was.