I'm the king of the swingers... 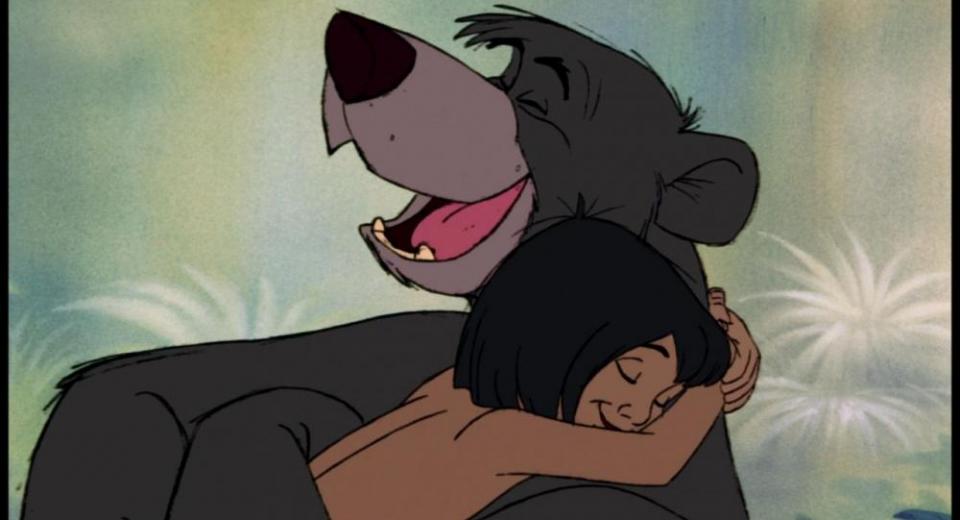 The Mpeg-AVC 1.75:1 ratio, 24fps picture looks excellent. You will see a thin black line down either side of the screen, but this is the correct framing for this movie. Be warned however, that some TV frame creation and picture optimisation settings might be caught out by this, causing visible artefacts where none are there on the source material. The picture has been completely re-mastered for this Diamond Edition, and this is probably the best this movie has ever looked. The beautifully painted back drops feature the gentle impressionistic style that has often been copied, but rarely equalled, while the animation is almost perfect, being entirely smooth with no noticeable change in colour or tone between cells. There is never any shortage of movement, with plenty of pans and zooms around the backdrops, including multiple background moves, where the backdrop is split across different cells and moved at slightly different rates, to give the illusion of a smooth zoom through the jungle.

It is almost impossible to criticise animation transfers that are this good and it will look great on even the most poorly set up TV. For this reason, this is not a great demo disc, as it will not show up any underlying problems with the display device. The original mono film soundtrack was also recorded in stereo and has been re-mastered a number of times over the years and appears here as DTS-HD MA 7.1. The audio is now anything but mono, with the splitting of the low frequency information to the LFE, a few spot effects (Baloo’s “Bagheera” call Mowgli is caught by the Orang-utans is one of the most obvious) in the surround channels, some ambience to the effects, concentrating the dialogue to the centre channel and using the original stereo music tracks in place of the mono versions.

Frequency and dynamic range are of course, quite limited and some hiss is evident, particularly during the musical sections, but it does not detract from the track as a whole. The midrange does sound a little pronounced and shouty at times, but this was part of the initial sound design and correction would have involved heavily re-equalising the orchestra and vocal performances to achieve a better balance.

Dialogue is crisp and clear throughout, although some of the ultimate high frequencies were lost during the original recording and have only partially been restored. Again, this leads to quite a warm sound, but it is still easy to discern every word spoken. For its age, an extremely credible performance and an excellent re-master, fit for modern systems, yet retaining its historical sound to a certain extent. The well produced single disc Blu-ray is quick to load and once the previews are bypassed, getting to the movie – with or without the 30 second introduction by composer Richard Sherman is very quick. There is no set up as such, with just the choice of languages and subtitles to worry about. The extras however, are quite extensive, with not only a set of new, HD shorts, but also the SD resolution featurettes from the earlier DVD releases.

First up is the audio commentary. This features the voice of Mowgli – Bruce Reitherman, Composer Richard Sherman and significant edited in interview footage from members of the original production team. This is well worth listening to and is well produced and very interesting. The new HD extras start with “I Wanna be Like You”, which is a blatant advert for Disney’s Animal Kingdom and is aimed squarely at younger viewers. Still good fun and well put together.

There is an Alternative Ending – played out as a storyboard. I think I prefer this ending and it is a shame it was never animated and finished.

Growing up With Nine Old Men is a series of interviews with the children of Disney’s inner circle of chief animators. They worked with him from the ‘30s through to the early 70s and helped to define the look of Disney films even today. At forty minutes long, it is a mini epic on its own and produced to extremely high values as one would expect for such a release.

The SD releases from the earlier DVD releases briefly comprise a forty five minute look behind the making of Jungle book, including a number of interviews with production members who are no longer with us. There is plenty of historical information and background to the movie and the process of making an animated movie.

The Lure of Jungle Book talks to animators about how watching the film put them onto the path of becoming cartoon artists.

Disney’s Kipling is a look at the process of turning Kipling’s books into the movie script. This explores some of the differences, but the presentation is somewhat patronising though.

Mowgli’s Return to the Wild is all about Bruce Reitherman – the voice of Mowgli, son of director Wolfgang Reitherman and for the last thirty years or so, wildlife videographer. There can be no doubt he enjoyed being part of the film and has remained in the industry ever since.

Frank Thomas and Ollie Johnston Discuss Animation is a period (1969) film with in depth information on the animation process, concentrating on the initial artworking and following on from there.

Probably the most interesting short is the “Missing Character” – Rocky the Rhino. He was effectively usurped by the Vultures and never made it passed the story board stage. Dubbed the “Mr Magoo” of the animal world, he would have added another comic dimension, as well as some minor peril, as Mowgli battled with the bad tempered leviathan. Ultimately, Walt Disney cut the character and re-wrote the scene to increase the visibility of the Vultures.

Disneypedia is a live action nature documentary looking at the real life settings of the movie. Aimed at the little ones, it includes excerpts from the film to highlight key points.

Buried in Music and More, is the facility to sing-a-long with the movie. All this does is activate the subtitles (in English only) for the songs only. No bouncing ball or different colours for different parts, and vocals remain at the same level, so not really a Karaoke option as you get with some movies.

The Jonas Brothers (Remember them??) contribute their version of “I Wanna be like you” The good news is it is only 3 minutes long…

Deleted Songs contains early and deleted versions of various songs and shows just how different this movie might have been. The audio is scratchy, but this does not mask the darker nature of the original score that would have underpinned a much more serious movie.

This is a truly comprehensive set of extras and many times the length of the movie itself. They are all well produced and presented, even if the navigation is a little confusing at times, with some of the gems quite hidden away. Well worth ploughing through, for any fans of Disney Cartoons. Walt Disney’s last movie has received an excellent launch onto Blu-ray and is a must for collectors and those with young children alike. The film is great fun and really is a timeless classic.

Technically, this is a very good release, with excellent picture quality, extremely well re-mastered sound and a set of extras that really compliment the movie. No cartoon animation will ever be a reference disc, but this goes to show just how re-masters of older material should be approached.

If you could only have one Disney cartoon, this might just be one to pick, as the antics of Baloo, Mowgli and their friends look set to entertain a new generation.