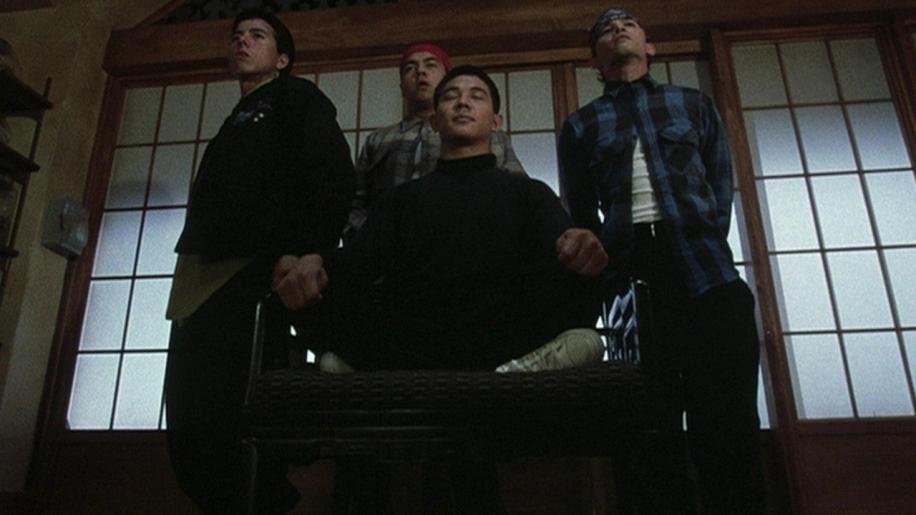 Both movies have been granted anamorphic 1.85:1 transfers and both, unfortunately suffer a multitude of problems.

The Master is submerged in a serious fog of grain that affects some scenes far more than others, but it is always present. The image is soft and often indistinct with backgrounds losing much clarity and definition, locations transforming into blurry facades. Whilst L.A.'s neon is vibrant, bright and vivid, the flames on the burning gang-house lack spark and the overall colour palette is subdued and drained of vitality. Edge-enhancement is, at times, quite excessive and mars the image still further and there are frequent spots and flecks of print damage flitting about the screen. Fast action is well held though, as is the contrast between the bright rooftop and the darker building interior of the climactic duel. Black levels, on the whole, are actually quite good, though the movie hardly puts them to effect. Skin tones lack realism, giving everybody a shiny TV Movie sheen that disappoints. In honesty, this is a fairly lousy transfer.

Hitman fares no better. There is copious print damage displayed throughout, with flecks and speckles popping about all over the place and, worse yet, a terrible scene that seems to reveal a couple of smeared finger-trails sliding down the mucky lens of the camera, that certainly distract from the action on-screen, severely mauling the image during one set-piece. The worst this is that no obvious attempt to remove this, which is simply unforgivable. Although possessing a much better maintenance of colour than The Master, and some pretty reasonable blacks that add great depth and contrast, Hitman is blighted by a familiar dusting of grain that, once again, seems to attack some shots more than others. There is also a rather disconcerting effect that hazes some exterior daylight scenes and, if that wasn't enough to put up with, traces of dot crawl and motion-trailing rear their ugly heads, too.

It's safe to assume that these films have never really looked fantastic, but the poor prints offered here have suffered even more with these transfers. Watchable, but not what DVD was designed for. Don't get your hopes up about the audio side of things, either.The Master is actually bolstered with two Dolby Digital 5.1 mixes, one an English dubbed track and the other in Cantonese, and the original Cantonese mono track. The less said about the appalling English dubbed track the better, so moving swiftly onto the Cantonese 5.1 you will find that most of the action is relegated to front and centre. But, at least, there is some reasonable steerage across the front speakers. The rears deliver a tiny amount of zip for a scooter zooming in from rear-left, and then a little bit more oomph for the final explosion - but there is nothing to shout about here. In fact, I even noticed that the rears suffered some split-seconds of un-welcome drop-out. Dialogue is clear enough on this track but the terrible soundtrack is slightly subdued - and, for that, we should be thankful. The original mono Cantonese track is not that bad in the scheme of things, although there is some slight distortion.

Moving on to Hitman, we find that we have only two choices - a woeful English dubbed mix that is to be avoided and the preferable original Chinese track. Both are delivered in only Dolby Digital 2.0 and neither offers anything other than the most rudimentary stereo separation. Always clear and cleanly delivered, the track still possesses a little bit of kick with the copious gunfire and body-slamming action. Shattering glass is less than scintillating, though and the scene in the elevator shaft is a great opportunity for some surround FX totally squandered. The disc that benefits the most from the extras is undoubtedly The Master, which can, at best, boast a typically excellent Commentary Track from Hong Kong cinema expert Bey Logan. Here he delivers an amazingly fast-paced, fact-packed yak-track (try saying that out loud, folks!) that is, once again, gold-dust. It takes more than one listen to fully glean the wealth of information that he supplies. He covers virtually everyone involved with, or even tenuously connected to the movie, and fills his banter with as many anecdotes and humorous personal insights and opinions as a hundred other commentaries. Once he hits his flow, he simply never stops. Quite honestly, Logan's track is the best, and most entertaining, thing on this disc - and that includes the movie! This guy truly is the Asian movie oracle.

The Master also offers us The Insider, an exclusive interview with stuntman and author, John Kreng (17.00) who plays a tough guy in the film and performs a few of the meaty stunts displayed. After an injury and then a stint as a stand-up comic, he regained his health and got into stunt work. He talks affectionately and very animatedly about working with Jet Li, giving us a fresh and frank view of the real ferocity of the fighting in the film. Next up is Crystal Clear - an exclusive interview with leading lady, Crystal Kwok (12.30) Quite good value, she reveals that she was still at university whilst filming The Master, and really only took the admittedly undemanding role to learn more about the film-making process as she wanted to get into producing, not acting. She explains how hard it was to work with the demanding and single-minded Hark, and the problems encountered in thrusting together a Hong Kong stunt-team and an L.A. crew. Another exclusive interview, The Master (15.40) has us meeting Yuen Wah, a prolific kung fu legend who choreographed the stunts and the fights in the film. This is a great subtitled featurette detailing his beginnings in martial arts, his work with, and eventually doubling for, Bruce Lee, and provides a useful overview of all the different fighting styles displayed in the movie. And finally, for The Master, we get the four-minute long Original Theatrical Trailer and the recent promotional trailer for the re-release. Not a bad set for a film that really doesn't deserve the attention. It's perhaps not surprising that Jet Li, himself, doesn't make an appearance, though.

Hitman, however, supplies us with the main man. In the Interview Gallery we get 10.32 minutes of the enigmatic star at his most confident and enthusiastic. Claiming that it was sheer coincidence that saw him ending up in the Wu Shu class at school, China's PR man shows us some neat home movies and some terrific patterns from his early Shaolin Temple movies. All smiles, the guy just can't seem to keep his deadly hands still. The interviewer deserves a medal for bravery. Also interviewed are Simon Yam (7.45) who seems to want to make romances because action movies get too boring and sweaty and Keiji Sato (13.16) who plays the villainous Eiji.

A fairly comprehensive, but now out-of-date Biography and Filmography of Jet Li, a lousy Production Photo Gallery, a Music Promo (1.35) - which is just a highlights compilation set to the film's score - and the Theatrical Trailer round out Hitman's selection of extras.

Overall, across the two discs there is some good stuff to be found. The point is whether, or not, you think the movies themselves warrant them. Terrible visual transfers, underwhelming audio mixes and admittedly lame movies do not a promising package make. But there is still some fun to be had with these two low-budget actioners. Jet Li is always engaging and his skills with his feet and his fists are incredible. These may not be Fist Of Legend or Hero, but if you are a fan and you don't already have them in your marital arts collection then the two special editions presented here are a necessary addition. The Commentary from Bey Logan is worth the price alone.