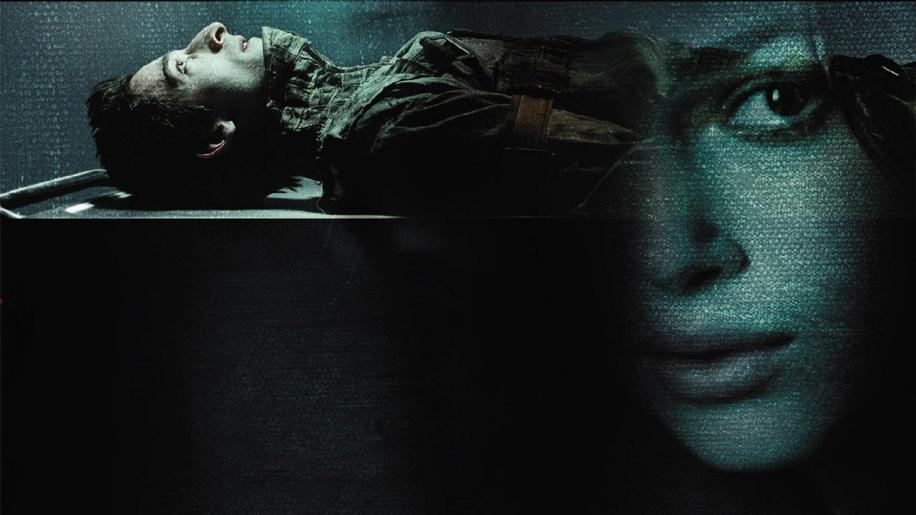 The film has been transferred in its original aspect ratio of 2.40:1 and is widescreen enhanced. It's a clean picture with accurate looking colours, deep blacks and solid contrast throughout. There is no dirt or flaws of any consequence and everything is nice and sharp. Apart from the stylised opening sequence the grain is minimal as well. The film has a very modern looking, cold blue sheen that make the outdoor scenes look suitably stark and atmospheric, particularly the wintry scenes in Vermont (actually shot Scotland) and the interior scenes while often dark, are never murky. It's a very good transfer.

Kicking off with a sonic assault that matches the visuals of the Gulf War scenes very aptly, The Jacket then switches to being a relatively quiet film with only sporadic bursts of noise and activity. The 5.1 surround mix, however, has good immersion and panning. The subwoofer isn't continually used but is very effective in a few scenes. The soundtrack in general keeps things low key with low ambient work continually beavering away on all channels in the background.

There's a substantial 'making of' that covers a lot of ground, with the deleted scenes integrated. The film makers discuss their exclusion in a more in-depth way than is the norm. Actually, the inclusion of a couple of these scenes would have helped the film if you ask me, making it less obtuse. This featurette also contains a lot more input from the screenplay writer than you usually get, so you get a good sense of how the original idea evolved into the film we now see. The featurette ends with three alternate endings which only differ by seconds but give The Jacket a different interpretation each time. Disappointingly, the reasons for their exclusion are not made clear although one of them would have made the film almost a clone of 'Jacob's Ladder'.

The second featurette is an effects piece and, unlike the first, is more run of the mill. CGI is CGI at the end of the day, and while those shown in The Jacket are fine, they're hardly ground breaking. Still, the inclusion of another short featurette isn't a bad thing. The theatrical trailer wraps things up and is nice to have, but I don't think it's all that hot. It wouldn't really have enticed me to go and see the film on its cinema run. As The Jacket didn't do particularly well at the box-office, it obviously didn't entice other people either.

An entertaining film, with a decent presentation. Fans of films with non-linear storytelling will enjoy it more. You certainly aren't spoon-fed the story here!