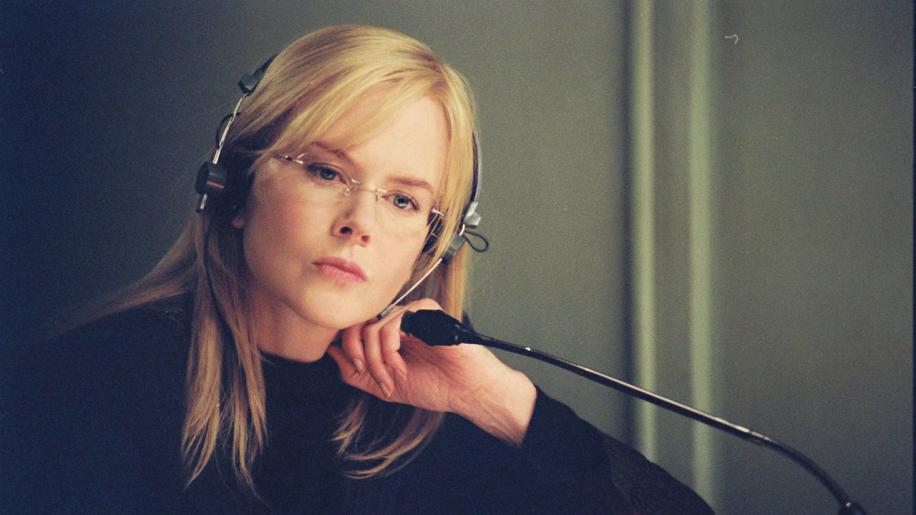 Image quality was average for modern big studio films transferred to DVD. That is to say it's superb as we've really come a long way in video quality of our DVDs. Outside of a few edge enhancements on the text of the opening credits, which is where you almost always see it, there was no problem. The images were adequately bright and free of artefacts. It lacked the gloss and sharp detail of many of today's CGI laden action films ported to DVD, generally these will have particular emphasis on video and doesn't make a fair comparison. For a movie whose video spends a majority of its time focused on two faces talking to each other, the quality is beyond reproach. The attention to acoustic details in a movie like this one that could have gotten away with second rate audio never ceases to amaze me. The movie opened with sound over a black screen, before one pixel of video we were engulfed in a windswept African savannah the wind issuing from the rear to the front and echoing to the rear again. Then the African landscape and a dirt road comes into view and it was as if we had already seen this image in our minds. Thankfully the dialogue was clear, because there is a lot of it to listen to. The surround effects are seldom used due to the nature of the film but the odd time there are gunshots and an explosion they're used to great effect. The sub is referenced in the big explosion scene and wakes up your surround system in an audio effect that are sure to be the envy of some action films. The explosion is well done without being over the top or gaudy. Surrounds are used mostly for atmosphere and acoustic reflections in the broad halls of the UN. Director's Commentary: Sydney Pollack is an intelligent man and a gifted director; it was a pleasure to cherry pick my favourite scenes and listen to what he had to say about it. It's not the most dense commentary track I've ever heard, there are vast expanses of the commentary track where he stops talking and lets the movie run. He mainly talks about the production of the movie, the actors and the rare opportunity to work in the UN.

Alternate Ending (1), Deleted Scenes (3). You get the general idea, Deleted scenes come at you one after the next with no means of selecting between them. There was one alternate ending and I won't give it away here. I would like to have seen the Scooby-Doo ending included here too but it was curiously omitted from the DVD release.

Sydney Pollack at Work: From Concept to Cutting Room (10 minutes): This is a commentary by Sydney Pollack telling us a bit about his life as a director. In this feature he gives us a lot of details about the experience of directing movies. Although Interpreter is the backdrop there isn't much in the way of behind the scenes looks or stories about making the movie per-se. It's a fresh take on the typical making of garbage you get on DVD extra features; however some of Mr. Pollack's dialogue for this feature is a repeat of the director's commentary.

Interpreting Pan & Scan vs. Widescreen (5 min 9 sec): Sydney Pollack gives us his views of Widescreen vs. Pan and Scan accompanied by a some specific examples of what you're missing in his movie if you watched the pan and scan. Bravo, anyone who rents DVDs should listen to Mr Pollack.

The Ultimate Movie Set: The United Nations (8 min): This feature gives us a look at the UN building in New York City the location Sydney Pollack was lucky enough to be able to film for much of the movie. Koffi Annan had to personally give permission to make the film in the building. Filming in the actual UN serves the film well giving us a genuine feel for what it's like to be an interpreter as well as any documentary could. The short feature gives us all we need to know about filming in the building and some of the hurdles they had to face.

A day in the life of real interpreters (8 min 18 sec): Bravo to Universal for giving a real special feature. A movie called Interpreter should have a documentary about real interpreters and give real life interpreters a chance to tell us what their job is like. It's a fascinating feature, easily the best on the DVD (although Pollack bashing pan & scan is priceless) these people have such important jobs and can sometimes make or break a diplomatic meeting of minds. Interpreters have a story so often overlooked but so important to the world. The DVD is lean in the way of extras, giving you a lot of bang for the half hour or so you'd spend watching them all, commentary notwithstanding. Thankfully there's not a lot of fluff in the extras and I applaud Universal for it. Interpreter isn't of a genre that lends itself to rabid fandom so it's unlikely you'll see a double dip release in subsequent months so if you ever considered owning this movie, this is the one. Audio and video quality is everything the material requires with short but good features this DVD is a solid rental.

While the movie might have been slow for many, it's a well crafted intelligent film with a plausible story. The cadence of the film might have suffered by comparison to the opening scene that hinted at a different, perhaps more gripping movie. The real draw to this film will be the opportunity to watch two talented actors in the hands of a skilled director. If you liked films like The Pelican Brief, The Conversation or Manchurian Candidate this will fit in nicely with the Political Conspiracy film, just don't watch any of them with me or I'll be annoying you with questions throughout.