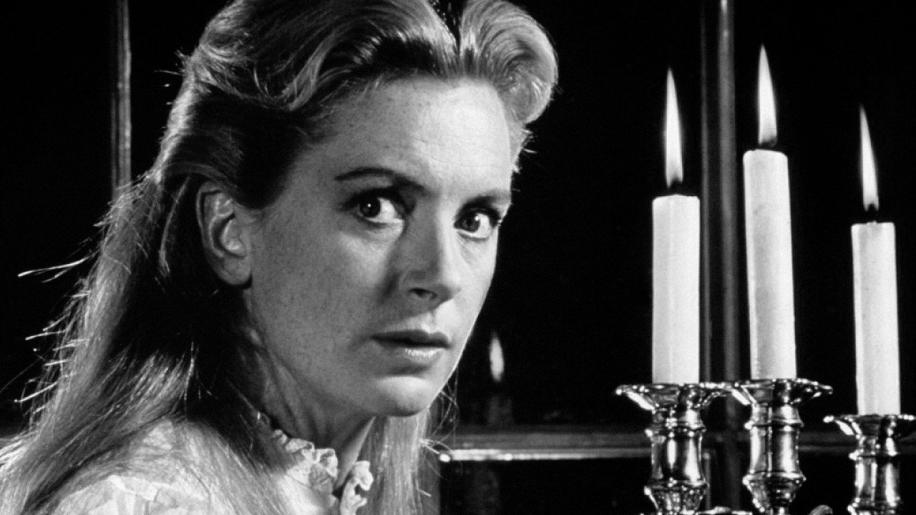 The transfer here appears to be pretty much identical to the R1 release. Ditching the full-frame option from the US disc, this edition of the film contains just the alluring beauty of the original anamorphic 2.35:1 image.

Although bathed with a very fine patina of grain, and suffering some very occasional and really only slight print damage - just the odd vertical line down the centre of the screen that lingers after one or two scene changes - The Innocents looks absolutely wonderful for a film that is almost forty-six years old. Blacks are splendidly solid and consistent - the shadow-play is breathtakingly beautiful, as is the contrast of surrounding gloom around the thin strips of candlelight or flame. Faces can occasionally appear a little too bright, but again, this seems to enhance the surrealism of the black and white imagery without actually being detrimental to the overall image. Freddie Francis actually made use of some intensely hot bright lights to create a lot of the depth to the picture, so some occasional blooming of the whites is now understandable. The disc transfer copes admirably with the simply gorgeous compositions that Clayton and Francis created, exuding a tremendous sense of scale and depth to the huge, and highly detailed interiors of the house, or to the manicured gardens outside. Check out the detail on the shot of Miss Giddens looking out over Flora to the solitary figure of a ghost standing in the reeds over on the other side of the lake. You can plainly see the marvellously captured image of a small waterfall way, way off in the distance, despite the intentional misting of the periphery of the picture to enhance the “is she there, or isn't she?” frisson. Wonderful shot, and the disc does it justice.

Of course, now it hard not imagine how this film would look with a high definition transfer and, naturally, there is bound to be one some day. But for now, this is a lustrous enough image in its own right to justify picking up. Find the biggest screen you can, turn off the lights and sit back and revel in a great transfer.

As with the R1 release, The Innocents is furnished with a DD 2.0 mix, but there really isn't much in the way of separation to bolster the audio dimension of the film. The effects are largely confined to just the odd opening of a door, the shutters banging in the wind, footsteps and, in one nice moment, a sudden screeching, but, on the whole, there isn't a lot of width to the track.

Dialogue is, however, very clear and strident. In fact, it positively booms, and sounds like it has been topped off with a slight echo. The early sequence in which Miss Giddens is given the job by Michael Redgrave's un-named Uncle sets the tone for what will follow, with voices that sound quite harsh and raucous. But, to be honest, this effect - which carries on throughout the entire film - is probably very appropriate. For a film that is set in, and around, a gothic mansion of vast rooms and halls and the wide gardens and lakeside beyond it, this shouty quality and accompanied echo can be quite authentic. However, I doubt that this effect was completely intended.

The score by Georges Auric comes across well, as do, ironically, the sudden silences that I mentioned - the transition from atmospheric swells and effects to complete noiselessness is beautifully captured by the disc. That sequence in the walled-garden when Miss Giddens spots the figure looking out over the top of the tower is the obvious standout.

Still, I think that a little more care could have been taken with the voices and the use of a more robust stereo image would have been preferable. As it is though, The Innocents sounds very decent indeed.

I've said many times in the past how much I admire and enjoy Sir Christopher Frayling's contributions to movies, whether they are in the form of commentaries, documentaries or essays. He has such a finely-honed attention to detail and a worthy sense of insight and opinion that just listening to him is always a rewarding experience. But, I will concede that to some people, he can sound a tad stuffy and scholarly. However, his chat-track here is inarguably an exhaustive, passionate and intelligent probing beneath the paranoid and psychologically complex layers of Clayton's film. Although there is much that is already discussed in his equally excellent introduction to The Innocents, his authoritative and intuitive nature reaches many intriguing and detailed conclusions about Clayton's style, Francis' lavish cinematography, the dominant presences seen on screen and the veiled presences that the story revolves around. There is a wealth of interesting facts on offer and Frayling manages with ease to wade through the various tangents and background trivia without becoming too dry about the subject, like so many of the rapid-fire mouthpieces who adorn other vintage horror movies, such as the Universal classics, with their constant name-dropping cast biographies and overtly intellectualised manners.

So, then there is also his lengthy introduction. Lasting almost half an hour, this is simply terrific. Not so much an introduction as an elaborate visual examination and critique of the film. Actually shot on location at the country estate of Bly, Frayling wanders the grounds and, with lots of illustrative clips from the movie, discusses the themes, undercurrents, directorial style and screenplay alterations of The Innocents. As I mentioned, a lot of this is also covered in the commentary - almost word for word in a couple of cases - but here we have the benefit of the visual involvement of the location and how certain areas and views look today. Very good value indeed. An introduction-cum-making-of!

Next is an excellent little treat in the form of Clayton's first film, the 1955 short, The Bespoke Overcoat. Running for 35 mins, this stars Alfie Bass and David Kossof in an adaptation of the Russian “The Overcoat” from Gogol. An amazingly poignant and haunting tale about a poor worker, played by Bass, who craves the overcoat from the title enough to return from the grave for it, The Bespoke Overcoat is steeped in atmosphere and brilliantly acted. With typically incredible lighting and smooth direction from Clayton, this short film packs a tremendous emotional wallop. Although I'd heard of it before, this was the first time that I had been privileged to see the film. The transfer is also of a good standard, making this highly recommended.

Then we a nice Image Gallery that incorporates 18 Production stills, 22 Costume Designs - including some of the rather quite audacious dresses for Miss Giddens - and 7 Publicity stills to round the selection off.

Finally, there is US theatrical trailer which is very atmospheric and runs for 2.40 mins.

Overall, I was very impressed with this package and it effectively wipes the floor with the R1 edition, making it an easy decision which one to opt for.

A magnificent movie that finally gets the treatment it deserves. The introduction and commentary from Frayling make this release worth the investment practically on their own, but the inclusion of the rare film from Jack Clayton is a real step in the right direction for fans of the severely non-prolific director. A film that fully deserves its status as a classic, The Innocents is technically superb, thematically stimulating and richly rewarding no matter how often you view it. Laced with an atmosphere that creeps into your veins and stays there, Jack Clayton's interpretation of Henry James's famous story is like freezing time for 100 minutes. I can only think of a handful of movies that take the viewer so successfully and resolutely out of reality for their duration - Suspiria, The Evil Dead, Halloween, The Others (all devoutly influenced by The Innocents, I might add) for example - and none that do it with such measured, hypnotic ease.

Held in high esteem by a great many, this is certainly the opportunity to either upgrade from the lacklustre US release, or find out what the fuss is all about. Although part of an enduring family of supernatural dramas, Clayton wove something unique into the fabric of this ghostly tale ... something that is dark and disquieting. And, as far as Deborah Kerr goes, I will always remember her exquisitely nuanced and intensely intimate performance as Miss Giddens. I doubt anybody else could have pulled the role off so successfully.

Beg, borrow or steal it. It doesn't matter which ... just get a copy. Very highly recommended and a true genre milestone that has so often been overlooked by those that weren't employing some of its tricks of the trade for their own movie magic.