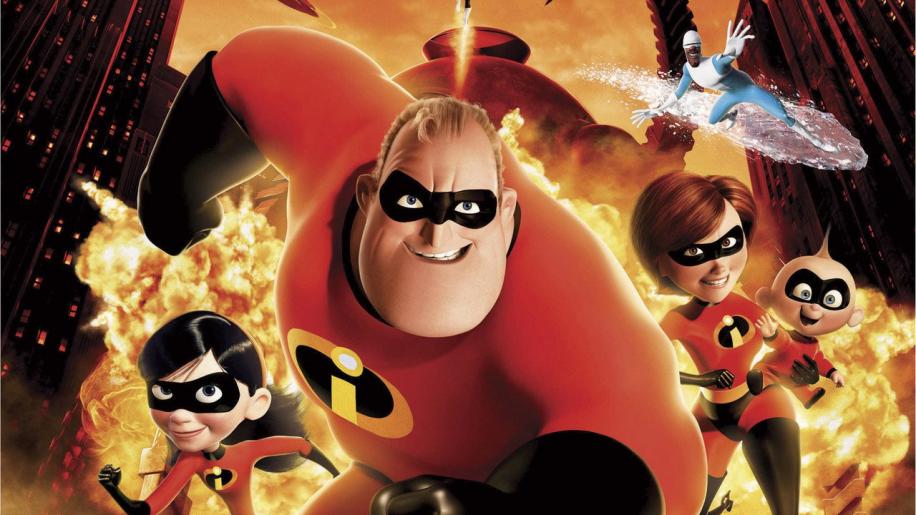 Well, what can you say? I mean really ... this is Pixar. Those guys and DVD were made for each other. Quite honestly, the image, presented here in anamorphic 2.39:1 is astonishing. Forget the lovely dreamy blues of Finding Nemo, the picture on this disc is literally mesmerising. Absolutely pin sharp and crystal clear with no trace whatsoever of pixellation, edge enhancement, smearing, chroma-shift or bleeding - the DVD gremlins have been banished completely. Obviously bereft of any form of print damage, too. This is a majestic transfer. The greys of suburbia and Bob's daily grind are captured with claustrophobic precision, making you champ at the bit for the colour to arrive. And when it does it positively leaps from the screen, so vivid and captivating that you almost wish you could climb in there with it. The costumes ignite the screen and the jungle, phew, the jungle is simply awesome - from the high-altitude fly-bys to the incredible depth once down amongst it, every leaf and stone is sharply realised. The level of detail throughout is breathtaking, the demolition Bob causes when he is flung through an office window, the patterns in the ice that Frozone creates - and check out the bullets zipping through the water as the goon tries to hit Violet. This is what DVD was made for. I tried to find some kind of fault with this transfer, people, to save myself from sounding like a total Pixar-nerd ... but I couldn't. This is digital perfection. Beg, borrow or steal the biggest screen possible for this one.

Pixar have provided a THX Optimiser to help you get the best from your set-up, too. Which was nice.

Brought to us with a Dolby Digital 5.1 EX mix that stretches, like Elastigirl, across the English, French and Spanish tracks, you can be assured that the phenomenal visual transfer is matched in the audio department, too. Well, almost. Where's the DTS, I hear you ask? Good question and I'm afraid I can't tell you the answer. Those expecting the super-widened soundfield of Monsters Inc's DTS ES shouldn't be too put off, though, because this mix sure does deliver enough exemplary steerage throughout all the speakers and plenty of bombast for the sub to get its teeth into. Your room will certainly be filled with the impeccably rendered sound design that The Incredibles has to offer.

From the subtle mundanity of Bob's office to the dense ambience of the jungle, the lightly energetic scampering of Dash's super feet around the room to the hair-trigger delivery of the baddies' whirling-bladed Velocipods roaring through the trees - this mix copes with everything the movie throws at it. Explosions feel solid and meaty, belching out with serious power, split-effects whipcrack front to back, back to front and cross over you with such precision and accuracy that you'll be ducking and diving as much as Dash does. The lava pit bubbles impressively beneath and then around you, Helen's mid-air explosion roars down at you and then the goo-balls that ensnare Bob thump in from every speaker. This movie literally assaults you with audio dynamics. Michael Giacchino big band blast literally sucks the air from the room, rolling over you with infectious sass. And for all this vigour, dialogue never suffers either - always clear and sharp and impeccably directed.

And yet ... and yet ... something is still missing, denying The Incredibles full marks for sound. I don't know, it's probably all in my mind but I just can't help thinking that even this impressive mix would have been bettered with a full-on DTS track to further stretch it out and pump up the aggression. I've never found EX a match for ES but, that said, it would be churlish and infantile to denounce such a well-steered, multi-layered track as that offered here. And, at least, it grants the opportunity for endless tinkering with your sound system - and who can resist that?

Disc 1 comes furnished with a couple of sneak peeks for Pixar's forthcoming Cars and Disney's Chicken Little (which looks terrific). Both these are decked out with a 5.1 makeover, too. Brad Bird also offers up a small introduction to the movie. But the real meat here are the two Commentary Tracks. First up is an exhausting chat from Brad Bird and producer John Walker. This is fast, lively and very funny. Listen out for the broccoli-continuity problems. Also discussed is the even darker tone that was once mooted, with the death of a good guy to have originally happened. A great track, even if Bird cannot help but offer thanks and praise to almost every animator as and when their particular scene comes up. The second track, which frontlines a gaggle of these animators, is equally info-packed and just as funny. Here, as elsewhere in the special features, it will become apparent just how close-knitted these people really are. Terrific value chat-tracks.Disc 2 is where you'll find the treasure trove of extras. There's a helluva lot of stuff here and you'll no doubt be thankful that the tone, despite the antics of Bird and co is actually a huge step up from previous Pixar releases, with the focus more for grownup interest than cutesy games and such for the little'uns.

Finally, we get to see what happens to the babysitter when little Jack Jack decides to play in the awesome and fully-finished off animated short Jack Jack Attack which runs for 4 mins and is a fantastic and hysterical addition. Then we have the Bud Lucky short that slotted in just before The Incredibles theatrical outing, Boundin'. I have to admit that I'm not too fussed with this one - a whimsical, daft musical fable about a jackalope and a shaved sheep. Nice that it's been added, though. Animator and Pixar stalwart Bud Lucky offers a commentary for his creation and is further credited with a small featurette entitled Who is Bud Lucky?

We get a nice 27min Making Of that takes us into the Pixar studios and shows wildboy Bird taking the crew to new levels of expertise. His passion is literally incredible and the enthusiasm he brings is commendable - he's just a big kid, really, with endless pranks and wisecracks punctuating the mind-boggling complexities of bringing an animated movie to the screen. It's also evident how stubborn he can be and how tensions can rise during the process. Good stuff - but where's Craig T. Nelson and Holly Hunter? More Making Of offers 40.53 mins of gubbins on story, character development and sound etc and is chapterised into ten chunks. But still no Craig or Holly! What gives?

Next up is over half an hour of Deleted Scenes with introductions by Bird as to why they never made it. There are six scenes in all in rough drawn, non-coloured animation. The lengthiest is the original alternate opening which is pretty cool but would've deviated too much from the thrust of the story as we know it. We also get to meet the ill-fated pilot Snug who thankfully didn't make the final cut as it would have been the death of him! Some good stuff here.

A super-cool extra is the sixties-style grainy 4:3 cartoon Mr Incredible And Pals (4 mins) voiced by Nelson and Jackson in a vintage spoof adventure. A neat touch here is having Mr.I and Frozone provide a commentary as well, in character. Jackson is superb -“Why's everybody got ladylips?” and “Oh, the black superhero gets caught!” Sheer class. Another nice gimmick is the NSA Top Secret Files which gives you a Top Trump Card style rundown on twenty-one Supers with added soundbites and hero team affiliations.

After 1.42mins of Incredi-Blunders containing some reasonably amusing outtakes, there is an Art Gallery of conceptual designs and a 9.21 mins mini-doc on odd-girl Sarah Vowell, who provided the voice of Violet. Very strange little feature, this one. Still nothing on old Craig T or Holly H, though.

And finally, we get the publicity angle which offers up three trailers including the terrific teaser in which Bob struggles to get his super-belt around his super-belly, and four spoof interviews with the animated Supers themselves as the movie premiers. In themselves, these aren't too bad, but I would have preferred some interviews with the real stars instead. I mean, why keep them under lock and key? They must have something to say about the film - even Violet's real-life counterpart did.

Oh yes, I must mention the numerous Easter Eggs up for grabs on Disc 2. There are plenty of these and they are found on the main menu screens by activating the little omnidroid symbol that appears. Some of them are great.

The Incredibles is the mightiest example of animation I have seen thus far - vibrant, engaging, affecting. The story is pure superhero fanboy nirvana and totally delivers all the spectacle and excitement required. I love the James Bondian feel and the robust, playful soundtrack. The characters are captivating and convincing - forget the emotional knee-jerking of the likes of Bambi for a moment and savour the real-life emotions displayed here. They may be larger, bendier or faster than real people but the Parr family of Incredibles still suffer all the pitfalls and everyday anxieties that we all do. But it is the blending of this normality of hidden talent, crushed aspirations and the longing to relive the past, with the fantastic alternate reality of actually unleashing those powers and dreams that make The Incredibles really live up to its name. An awesome movie that tips the scale and shifts the posts for every subsequent superhero tale to come. (Got high hopes for Batman Begins, though!)

And on disc, the AV quality is equally incredible. The perfect medium for endless rewatching with super-sound - despite no DTS - and super scintillating picture. The extras are a spectacular feast, too, that only drop a mark with the perplexing absence of vocal stars Nelson, Hunter and Jackson. But the overall package is an absolute delight. By the way, is there something wrong with me if I fancy a bunch of computer pixels? I mean Elastigirl is just sooooo sexy, isn't she?