Nothing is more powerful than the human spirit. 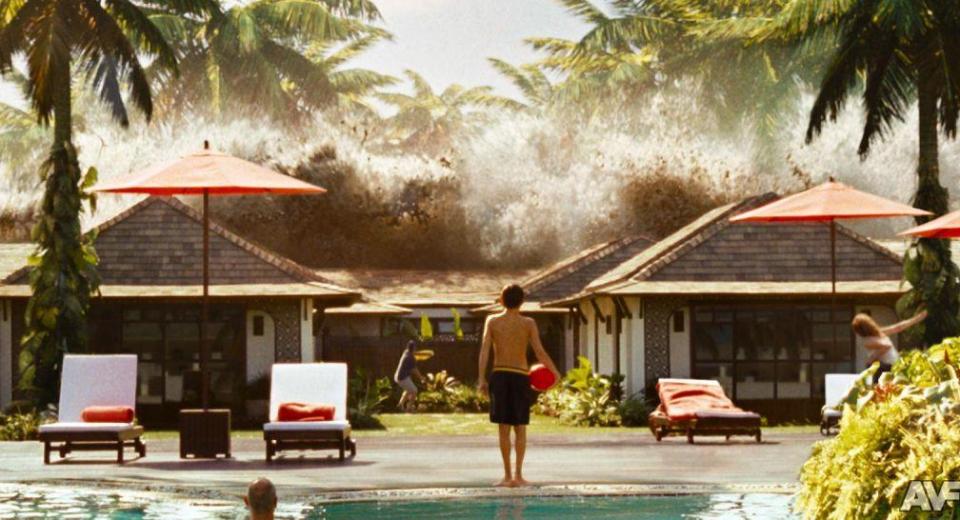 The Impossible comes to UK Region B-locked Blu-ray complete with a near-perfect video presentation rendered in 1080p/AVC in the movie’s original theatrical aspect ratio of 2.35:1 widescreen. Detail is stunning throughout; the beautiful – and terrifying – cinematography of the landscape and, in turn, the disaster, seamlessly blending in visual effects with rich photography (often involving water tanks and miniature effects work rather than CGI) and producing some thoroughly impressive shots as a result. From the close-ups of the disaster-ravaged survivors, complete with gruesome wounds and bloodshot eyes, to the fine detail of the scenery, which is so richly authentic that the film often takes on an even more documentary-like feel, this is a fantastic presentation. The colour scheme is broad and rich, although appears to have been tweaked to affect a perennial glow – even for the Spain-shot sequences – and generally boasts strong tones across the palette, up to and including the deep blacks, which afford excellent shadow detail. Hell, there’s even a little 3D pop to boot. Demo and reference quality through and through, this is so close to perfect it just edges into the top score slot.

The accompanying DTS-HD Master Audio 5.1 track is similarly impressive, attaining reference standard with its demo mix of stunning atmospherics and rich ambience. Dialogue comes across clearly and coherently throughout, from the desperate screams and shouts to the quieter whispers and whimpers; largely dominating the frontal array whenever deemed necessary. But it’s the effects that really stand out on this mix, crafting a stunning coastal atmosphere even before the rumble of the Tsunami shakes up your living room and throws everything into frenzied chaos. During the flood, rushing torrents of water explode across the surrounds, sweeping you up in the deluge and taking over the soundscape. Even in the quieter, more reflective moments where they look out at the aftermath of the disaster, there’s a wonderfully eerie feel to the track. Even the score is well utilised to accentuate the tone rather than trample up and down on it with overly theatrical overtones. It’s another near-perfect offering, again nudging into that top placement.

It should be noted that the rather excellent extras package does – even in its description – come with inherent spoilers, so, if you haven’t yet seen the film, then just trust in the fact that an Audio Commentary, some Featurettes, Interviews and some Deleted Scenes are all more than enough to satisfy fans on the extras front, and don’t read too deeply into what specific extras are on offer.

Audio Commentary
Perhaps the biggest giveaway, for those who don’t already know, is the fact that Director Juan Bayona, Writer Sergio Sanchez and Producer Belen Atienza team up with survivor Maria Belon to provide this fantastic accompaniment for the main feature, offering up the perfect blend of technical detail (the work with miniatures and water tanks etc.) and real-life-to-film comparison as Maria helps broaden the scope of the movie with her own memories of the event. Well worth investigating.

Featurettes
Casting The Impossible spends 7 minutes focussing on how they put together their capable cast, including the input that the real-life survivors had in the choices – apparently Maria Belon always wanted Naomi Watts to play her.

Realizing the Impossible offers up a further 6 minutes looking at the effects work done for the movie and detailing the blend of CG effects and practical miniature work, as well as the water tank shots.

Interviews
Interviews with Cast & Crew is just about the only thing on the disc that appears to be different from the US counterpart, but it is a welcome addition, adding a whole bunch of lengthy cast and crew interviews to the package. Stars Naomi Watts, Ewan McGregor and Tom Holland, Producers Belen Atienza, Alvaro Augustin & Ghislain Barrois, Screenwriter Sergio G. Sanchez, “Storywriter” Maria Belon (yes, that Maria Belon) and Director J.A. Bayona all contribute, in refreshingly honest, fairly unscripted interviews that range in length from 10 minutes to half an hour. Worth checking out.

Deleted Scenes
5 Deleted Scenes allow us about 9 minutes of additional footage, expanding some moments but not adding anything desperately vital to the proceedings. Worth watching once, but nothing they should have considered keeping in the final cut. There’s more of the ‘tree raft’, an unnecessary bit with a mobile phone, a nicer moment in the hospital, a brief bit with the hotel survivors, and more of the final scene, with both some positive and negative moments – revisiting ‘the idiot tourist’ was unnecessary but surveying the dead was touching.

Taking real-life disaster movies to the next level, The Impossible masterfully blends a stunning, often epic recreation of this true tragedy with a powerful, emotional and incredible tale of suffering, sacrifice and survival against all odds. With compelling central performances and strong direction – complete with clever use of practical effects rather than dominating CG – the film manages to paint an honest portrait of one of the most devastating natural disasters that mankind has ever seen, as viewed from an extremely personal level.

Or Region B-locked UK Blu-ray we get absolutely stunning picture-perfect video and reference quality audio, both of which are utterly demo-worthy, together with all of the extras that the US counterpart held, as well as a bunch of hefty exclusive interviews too. Fans should consider this a must-have package; those interested will likely be rewarded by investing the time on this impressive drama. Highly recommended.