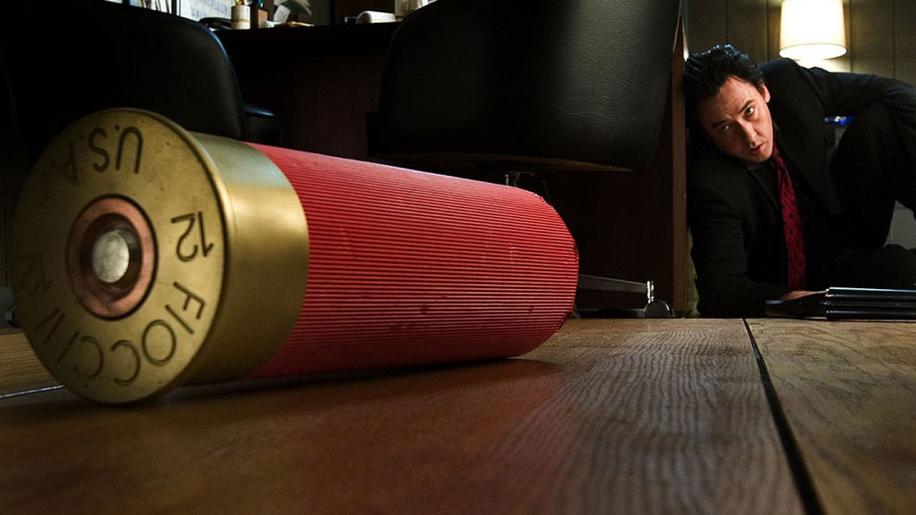 One can only describe this as fine with a flaw or two - it certainly isn't a reference disc and not just because it has topless dancers in it. The biggest problem the disc has is that it suffers from haloing and they aren't sporadic. They are actually quite distracting on an LCD, so I'm sure they're very distracting on a 6ft or greater projector screen. However, the print is clean, the transfer doesn't suffer from artefacts nor is it particularly grainy. It is also shot in a not particularly colourful way - the opening scenes are quite drab, with sparse use of colour, but it does get more colourful as the movie progresses. When it is colourful, from red lipstick to neon signs, it does look much better than the opening and there wasn't any obvious bleeding to the brighter colours. Ok, I know that's the style and I'm not deducting points because of it, but rather highlighting it as a reason for it not being a reference disc. Still it does look very nice. This is a major disappointment in my view, for a Dolby 5.1 soundtrack it is very much lacking in the dynamic areas. There's a little ambience from the rears, but unless you are cranking it out at reference volume, it is quite easy to miss or ignore. LFE is practically non-existent - I think I heard it used when a gun was shot, but that was about it. To cut to the chase, this is a very centre speaker-heavy movie. Having said that, the sound from the centre is very nicely done, with clear speech at all times, with the deeper voiced Thornton and Cusack sounding great, with the higher tones (such as breaking glass) sounding suitably high pitched and piercing. Shame that the overall ambience isn't that hot. First up we have 2 Alternate Endings, both are slight variations of the ending already in the movie, with the first one being very ironic and in a perverse kind of way, very amusing, the second one is essentially the same but with a less dark tone to the first with a final scene of the principal characters. I prefer the first alternate ending, mostly as it works with my sense of humour, but you should enjoy either given the context of the movie.

The Outtake with Billy Bob Thornton is a 1.32 minute scene which isn't so much an outtake, rather of Billy Bob performing the scene as Carl from his movie “Switch Blade”. Very funny, but John Cusack does look a little bit like a bunny in headlights.

Cracking The Story is a 17 minute featurette which discusses the movie in a slightly unusual way, with the screenwriters and the author of the book discussing topics such as when the book came out to the writing of the screenplay. It focuses on the writing of the script and the slight, subtle changes. I think it's interesting to hear the screenwriters mention the things they added and the author agreeing that it works, but it is a very dry conversation and I will be honest, quite a struggle to watch, although the end of the chat where they extol the virtues of the movie and hope you'll want to watch it “over and over” is quite sickening.

Beneath The Harvest runs for 13:06 and is the flipside of the previous conversation, with director Harold Ramis and the stars discuss the movie in a typical promo style. It's not as sickly as most promos, rather more grounded and a little more open than others which is refreshing. Maybe the Hollywood machine is getting the hint we'd rather have honesty than PR shoved down our throats. It is a little gushy in a few places, but it is quite enjoyable to watch - Billy Bob being candid by saying it won't change your life or has any deep meaning. It's meant to entertain and nothing more. Now that's honesty.

Ice Cracking: Analysis of a Scene is exactly what it pertains to be - a 6:18 minute featurette which revolves around the scene where ice cracks. I can't say more than that, sorry, because it does have significance to the plot. As the title says, it shows how the scene was constructed and shot, which is interesting, keeping in mind what happens in the scene. No, I'm not spoiling it - go watch the movie!

Finally we have the Audio Commentary with Director Harold Ramis. Most people know him as Igon from Ghostbusters, but he has made lots of movies, however, he has a very dry, almost monotonous voice, but it's quite an interesting chat track. As I initially thought, when Nielsen was on screen, Ramis informs us that she was trying to portray her character akin to Jessica Rabbit - so my impression was spot on. He tells us everything from budget constraints to Billy Bob's phobia of water and while his voice isn't the most enthusiastic and the fact he's alone on the track, it isn't quite as painful as I thought it would be. A difficult one for me to mark. On one hand, I enjoyed watching the movie, as the main actors are generally speaking very watchable, the story moved at a reasonable pace and it does intrigue you with its crosses and double crosses. On the other hand, it won't stand up to multiple viewings - and I know as I've watched it 3 times - and there are better movies out there, not to mention that ultimately the plot itself is quite simple as I've already mentioned. However, there aren't that many movies that have a feeling of noir these days, although everything is circular, so we'll probably see more now. I can't recommend the movie, but I can't say it's not worth viewing either. If you like noir-esque movies or indeed the actors, it's well worth picking up. But be warned, I'm still not sure if it's a thriller with comedic elements or a comedy with elements of a thriller.