Before Snow White there was... Frozen? 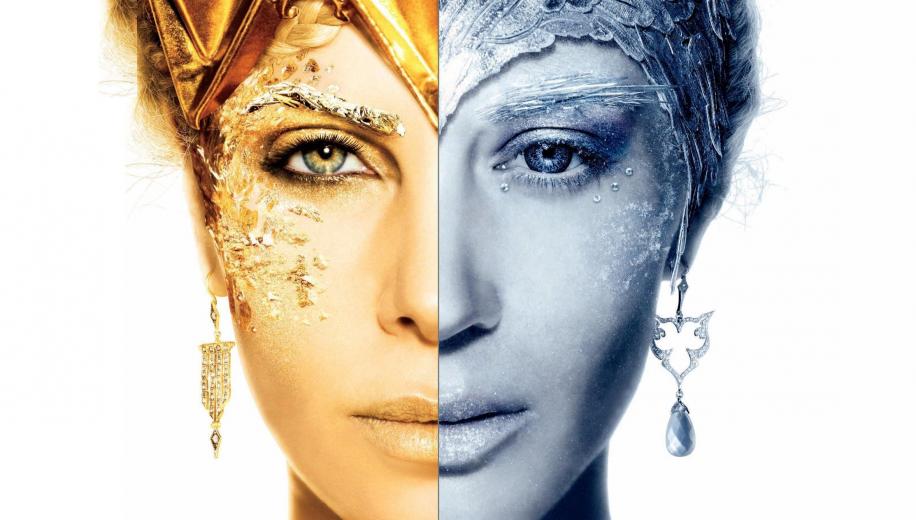 Using a 300: Rise of an Empire template, The Huntsman: Winter's War adopts a prequel/sequel approach to continuing the story from Snow White and the Huntsman.

Whilst the first film wasn't exactly a tremendous success, it was far superior to its counterpart Mirror Mirror, and an engaging, alternative LOTR-informed re-vision of the classic fairytale (notwithstanding the bizarro world where anybody could possibly think Kristen Stewart is more attractive than Charlize Theron) boasting an upcoming all-star cast headlined by Thor himself. Understandably given her scandal with the director, Stewart did not elect to return to this prequel/sequel and neither did director Rupert Sanders either, leaving the film's visual effects maestro to take up the reins for a fairly adventurous directorial debut. Cedric Nicolas-Troyan certainly maintains the look of the first film, adding some lavish effects; whilst the screenplay takes some Frozen-style elements and crafts an engaging backstory to the two best characters from the first film - The Huntsman and Queen Ravenna.
Things start to unravel somewhat, though, when we jump forward in time to after the events in the first film, with an already slightly off feel to the proceedings as new cast additions Jessica Chastain and Emily Blunt appear to be rather obviously cast in the reverse roles to the ones they should have been in. Following Chris Hemsworth's Huntsman (going full Connery in a near-comedy accent) around in his quest to find the mystical mirror (which will undoubtedly bring another enemy back into the fold), the film struggles through a disjointed middle act before its conclusion. The newcomer director has plenty of toys to play with - some more effective than others - and certainly the bloated Extended Cut doesn't add much (and Liam Neeson's narration outstays its welcome), although this is far from an ineffective prequel/sequel; easily entertaining for the same crowd who enjoyed the original.

The 2D version is near-reference standard, promoting outstanding detail throughout, with rich backdrops – CG-dominated but largely seamlessly so – peppered with intricacies, whilst close-ups reveal the intimate textures of the lead characters’ faces. There’s almost no softness whatsoever – perhaps a smidge by the candlelight, with some intention behind it – and clarity is resounding. The colour scheme is rich and vibrant where it needs to me, although the ice palace is suitably unforgiving and almost monochromatic in depiction.

The 3D counterpart isn’t without its own merits, however, with some nice depth to the piece, folding into the frame, whilst a few whizzing arrows and flung axes threaten to strike out at you. Whilst the effects dominated battles are obviously the ones that are designed to benefit the greatest from the added 3D enhancement, it’s actually some of the more innocuous moments – the Huntsman walking through a forest – which more naturally embrace the added dimension, as each individual tree and tree stump is set apart from the next by different depths into the picture, giving it a very intricate and well-rounded feel.

Whilst The Huntsman isn’t the darkest affair – and so the 3D doesn’t make it uncomfortably dark to watch – it is quite a sober, at times cold looking affair, which isn’t quite as conducive to 3D, which might have worked with some stronger contrast to add to its extra dimensionality. Nevertheless, stylistic choices aside, the 3D on The Huntman is solid work.

The Huntsman hits UK shores complete with a DTS:X enhancement to its core DTS-HD Master Audio 7.1 track, which itself sounds exceptional, delivering dialogue clearly and coherently riding atop a deluge of finely-tuned effects and a suitably bracing score. Whilst the latter may not be particularly memorable, it does go some way to enhancing the proceedings, particularly during the more action-driven sequences. It's the effects though, unsurprisingly, that once again impress, allowing precision-delivery of key flourishes to engage you from every angle, and cross your living room. Whether its the very same arrows and axes that make the most use of the 3D enhancement, or larger-scale effects - like the Ice Queen's Frozen-like powers - the power and precision of these elements is striking, and more broader atmospherics - from rushing rivers to sheets of rain - palpably engulf you in the proceedings. Impressive.


The Huntsman's accompanying DTS:X-enhanced audio also knocks it out of the park The UK steelbook release not only sports both the 2D and 3D versions of the film, as well as both the theatrical and extended cuts, but also a decent selection of extra features headlined by a Commentary from Director Cedric Nicolas-Troyan. The rest is largely Featurette driven, with Love Conquers All - Behind the Scenes with Cast, taking an overview to the piece; Two Queens and Two Warriors, and Meet the Dwarfs looking at the characters; Magic All Around - A Look at the Visual Effects, doing just that, whilst Dressed to Kill focuses on the costumes. The disc is rounded off by a number of Deleted Scenes with optional Commentary, a Gag Reel and a bunch of Preview Trailers.


The Huntsman gets a nice-looking, and remarkably shiny, steelbook design

There's nothing particularly wrong with the steelbook design afforded this sequel - indeed it boasts some nice glossy images front and back, and certainly catches the eye - but it's somewhat odd that these are the two images picked for the release when they could have easily been used for the original movie and not the sequel. It's a shame because slightly more adventurous artwork choices - like the below dual-face image of the two queens - may have better distinguished this sequel. Beyond that, it's certainly a very shiny-looking, gold-dripping title. For a debut directorial effort, Winter's War is a solid enough sequel to a far from exceptional film

This UK Region Free Blu-ray release - particularly in its shiny Steelbook guise - provides both 2D and 3D versions of the film, and theatrical and extended cuts (although the 2D theatrical cut is easily the best way to enjoy the film), as well as excellent video and outstanding audio, and a nice selection of extra features. It's a must-have for fans who enjoyed it at the cinema and a recommended purchase for those who bought the first film.

You can read our interview with The Huntsman: Winter's War director Cedric Nicolas-Troyan here.