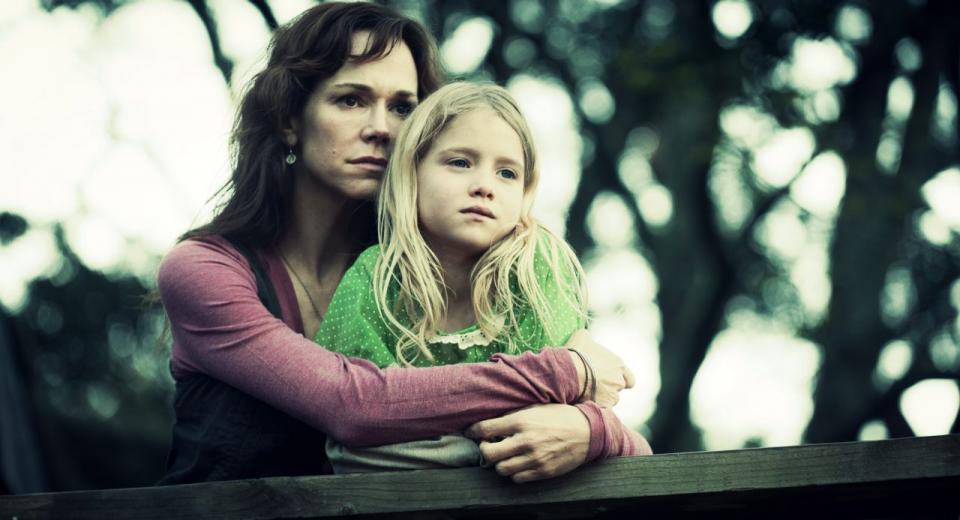 The Hunter has an AVC encode and an aspect ratio of 2.35:1. It is unmolested by edge-enhancement, banding or DNR. Which is always good to know, isn’t it?

The image here is highly detailed, realistically saturated, given the overcast and damp setting and the somewhat subdued and muted palette, and cleanly presented with no artefacts in the misty half-light and no noticeable trace of aliasing taking place. The image also retains a rewardingly film-like appearance, with grain looking naturally resolved, that is not compromised by any overt use of filters or noise reduction.

I was talking about Willem Dafoe’s amazing face … and, as grizzled and bearded as it appears here, this transfer is a wonderful showcase for it. Although all close-ups are graced with fine detail, superb clarity and a vigorous, authentic in-yer-face texture, it is his face that we get to peruse the most intimately and, like a roadmap of the Nevada desert, it brings every bump, crag, groove and crevice into sharp relief. This detail stretches to separation in hair and beards and caters for a certain lucidity in the eyes. Other things such as leaves, the indented earth of paw-prints, the texture of animal fur, the crispness of flowers amid the frosted moss and the snowflakes fluttering in the wind (both real and CG), patterns in torn snatches of material found in the bush or the remnants of bone, wood-chippings and course pebble paths, rust and grime on the cranky old generator and grain in timber are all brought vividly and sharply to the fore in an image that is often quite gloriously distinctive.

In-tandem with the muted palette, colours may not be as vibrant or as bold as you might expect from a film set in Tasmania, but they are cheerily natural and always pleasing, regardless. The greenery is well depicted, the earthiness of the setting reassuringly rustic, and the odd splash of blood is unshowy and equally authentic. Clothing and décor is always rendered with care and clarity.

All of this is superb, and the transfer would be excellent but for one thing. The contrast is set more than a touch too high, which has the effect of flattening out the image, diffusing the shadows with grey and blowing-out highlights,and masking some of the detail during the higher-ground exterior footage. Now whether this is down to the original source and was an aesthetic decision made by the filmmakers, I do not know, but it does lower the overall appearance of this transfer as far as I am concerned. It’s not much to complain about, however, and The Hunter bags itself a solid, reliable 8 out of 10 from me. A wonderfully evocative DTS-MA HD 5.1 mix accompanies The Hunter. It won’t set the world alight, but it is brilliant at providing Martin David’s Tasmanian odyssey with pleasingly natural ambience that helps bring the natural wildlife of this secluded region into your living room – insect chirps and birdsong etc - and provides rare but punchy dynamics that ripple out across the carefully constructed soundscape to shatter the occasional stillness. It effectively creates an atmospheric shroud that falls across the environment like moist mist.

There are no problems with the dialogue, or the warm, enveloping presentation of the film’s largely ambient, but unremarkable score, which is heavy with poignancy without ever resorting to any bombastic histrionics. The sudden call of Springstein’s anthem “I’m on Fire” hits a delicious high note that reaches deep into the soundscape, adding a nice pop-rock presence. And the sound of David’s classical music pounding out from the treetop speakers adds to an aural environment that already enjoys a wide grasp around the set-up with a spacious stereo spread. We can hear twigs snapping off-camera, the distant hooting and crying of birds positioned further afield, the movement of something unseen in the woods and the well-steered passage of vehicles from speaker to speaker. More immediate effects such as the steel clamping of a trap’s jaws, or the springing of a trip-wired stem, are splendidly captured too.

There are a few gunshots ripping through the mix, and they all have the necessary vigour and aggression. We have a distant shot fired, which sounds appropriately far off and echoing, but there are also a few close-up rifle shots that punch through the air with considerable and realistic oomph. Having just reviewed Peter Hyams’ Outland it was easy to tell that they had incorporated some of the stock library ballistics of Dirty Harry’s Magnum blast into the shotgun roar. Here, you can tell that the weapons sound properly authentic and carry all the necessary weight and air-displacement that the sound-capture can accurately reproduce. I have certainly heard more exciting rifle-shots let loose on lossless audio, but these still sound very realistic.

The mix allows for some surround activity and panning around the channels is expertly done. We have convincing hubbub in the airport and the local pub – the crack of pool-balls and the sound of a glass placed on the bar – and some solid bass presence when called for during the more emphatic and gripping moments of drama in the woods, such as rather nasty fall.

All told, this is still something of a low-key audio experience overall, but one that is lit up with lots of interesting moments that help to place you in the midst of the wilderness.

Again, like the video transfer, this is consistent, enjoyable and well-presented, and it gets another 8 out of 10. At first glance, there appears to be quite a bit attached to this release, but what we get is actually a more perfunctory set of pretty regular stuff.

The Commentary Track from director Nettheim and producer Vincent Sheehan. This is a relaxed affair that nevertheless covers some ground. The location shoot and the casting get plenty of discussion, as does the power of the original novel. We hear about the relatively spare use of CG for the snow, the animal in question and a couple of other surprising elements. They talk about the lighting of scenes and how the weather affected the shoot, and we get a good overall dissection of how they interpreted the source and brought it to the screen.

We also get some Deleted Scenes that come with an optional commentary. These don’t really add a great deal, although they do flesh out Sam Neill’s rather suspicious character and reveal more about Martin David’s assimilation into the family way of life down at the cabin.

There is a half-hour making of that has been split up into chapters but can be played in one hit. This is filmed on-location and brings in thoughts from the makers and the cast about adapting Julia Leigh’s novel (Sam Neill has a great time ”bigging-up” his character), the experience of shooting in Tasmania, about the characters and the story’s emotional themes, how Dafoe learned to build traps and make campfires and move through the bush, and there is a nice little section at the tail-end in which locals discuss their belief in the existence of the Tiger. What I find quite unusual is how these people seem to revere the animal as some sort of redemption for mankind. The animal certainly did exist and could easily still be surviving out in the wild – let’s face it, that’s a very big and mostly uncharted area – but they seem to regard it as some sort of Loch Ness Monster in terms of its almost magical meaning to the ecology and the culture of the region. I sincerely hope that it does live on, and I believe that it does. But the animal is hardly the spiritual figurehead and beacon for mankind’s salvation that these people would have you believe.

Also included, behind a smattering of other trailers, is the film’s Theatrical Trailer. Willem Dafoe straps on his backpack, hefts a high-velocity hunting rifle and goes stalking the high ground for the elusive, and possibly even extinct Tasmanian Tiger in Daniel Nettheim’s simmering, lyrical and meditative thriller. What he delivers is a measured, introspective performance that is possibly more picturesque and breathtaking than the rich landscape, itself, but the story is a purposely meandering expedition into the conflicted soul of a man confronted by emotional alternatives. Punctuated with a swipe of domestic drama, a dash of deadly espionage and buoyed aloft by a tantalising waft of spiritual awakening, The Hunter attempts to be many things at once, yet is really at its best when Dafoe is up in the mountains, alone, and on the prowl.

The story has the feel of being both too ambitious and also a little bit underdeveloped, and there is an undeniable sense of waiting for something to happen – which, if you think about it, is precisely what hunting is all about, so I suppose this factor should be a feather in its cap. But, at the same time, this ambient mood could challenge the patience of some viewers, and the film runs the risk of ultimately failing to deliver on some counts.

A good transfer brings the location photography to life and simply excels when it comes to rendering facial detail, but it is somewhat compromised and letdown by the contrast level which seems too high and washed-out to allow the imagery to properly pulsate – though this could still be the desired look that the makers were after. The audio is very good and delivers some decent, if sporadic clout with clarity, detail and power. An enjoyable if lightly delivered commentary and an interesting making-of spill the beans on what it took to bring the novel to the screen, and a selection of deleted scenes flesh out the characters a little bit more.

The overall package is a consistent one, but the film remains an experience that may fail to properly satisfy come the final act. But I wouldn’t hesitate in recommending The Hunter for those who like their dramas to spend a little more time allowing the characters to breathe and to think, without simply resorting to set-piece escapades.

Not quite the thriller you may expect, but a compelling outdoor drama nonetheless.