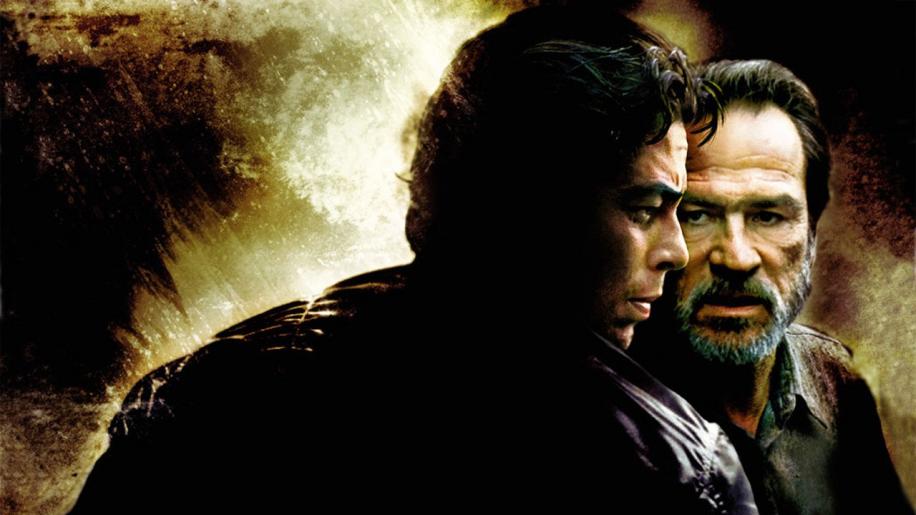 From director William Friedkin (The French Connection, The Exorcist) comes The Hunted, a fast paced thriller starring Tommy Lee Jones and Benecio Del Toro, which - no surprise given the title of the movie - is a cat-and-mouse chase movie in a similar vein to the classic, Rambo.

L.T Bonham (Tommy Lee Jones) - a retired military tracker/hand-to-hand fighting instructor - is called out of retirement to hunt down military veteran-turned-renegade Aaron Hallam (Benecio Del Toro), who - after "losing it" from seeing one too many acts of ethnic cleansing in Kosovo - stands accused of murdering hunters in a local forest.

Surprisingly, as Jone's character arrives on the scene of one of the murders, and we anticipate a protracted hunter vs the hunted sequence...instead Bonham captures Hallam within literally minutes (or such is the appearance), and the movie swings off in a slightly different direction. Bonham's work, assisting the local law police (led by the always good Connie Nielsen) seems done before it's even started, so its obvious that Hallam is bound to escape. Thus ensues more chases as the grizzled instructor hunts down the renegade pupil....

This is a violent, bloody tale that moves quickly and contains a reasonable amount of action. The problem, however, lies in my description in the first line of this section. The Hunted has many echos of Rambo in it, but unfortunately doesn't carry anything off as well as the former. There is a distinct lack of tension in the action - not helped by the fact that Hallam's capture seems all-too easy - with an even more distinct sense that the actors are simply going through the motions and doing it for the paycheck (of course all actors are, but we hope to suspend the belief that they are actors for the duration of the movie).

In my opinion, Tommy Lee Jones still can't shake off the US Marshalls and The Fugitive persona, and although his character here is different, echos abound of his former work which doesn't help his cause. Don't get me wrong, he's a good actor and is suitably grim faced for the majority of The Hunted....but you can't help but think "haven't we been here before?". Benecio Del Toro, too, puts across a suitably taciturn performance, but it feels like he's coasting it. Where's the real menace? Where's the real sense of a guy losing it? I failed to see it.

Some of the later scenes, as the film is working up to the final showdown, feel contrived and actually annoyed me slightly. The "log trap" and "waterfall freefall" are two such scenes - where was the time to construct these things? Where did they come from so quickly? And miraculously they were positoned "just right". How convenient. It all smacks of a movie that's been done before, scenes that have been seen before....in short nothing is really a surprise.

I've mentioned that this is a bloody tale and indeed The Hunted is not for the squeamish. The opening Kosovo sequence is disturbing with piles of corpses and lots of innocents - including women and children - being gunned down. The blood flows freely in other areas, too: deaths are suitably bloody, and the knife-fighting is visceral and unsparing in its depiction of violence. Indeed, the knife-fighting itself deserves special mention. The filming here is spot-on, and the knife-work looks suitably vicious and authentic.

Overall, I would describe The Hunted as an average film. By no means is it bad, it's just not that good either. A by-the-numbers thriller with some good action sequences, but it could have been better.