“Moscow's not the worry, neither is the whole Soviet navy. I know their tactics, I have the advantage. The worry is the Americans. We meet the right sort, this will work. But if we get some buckaroo...” 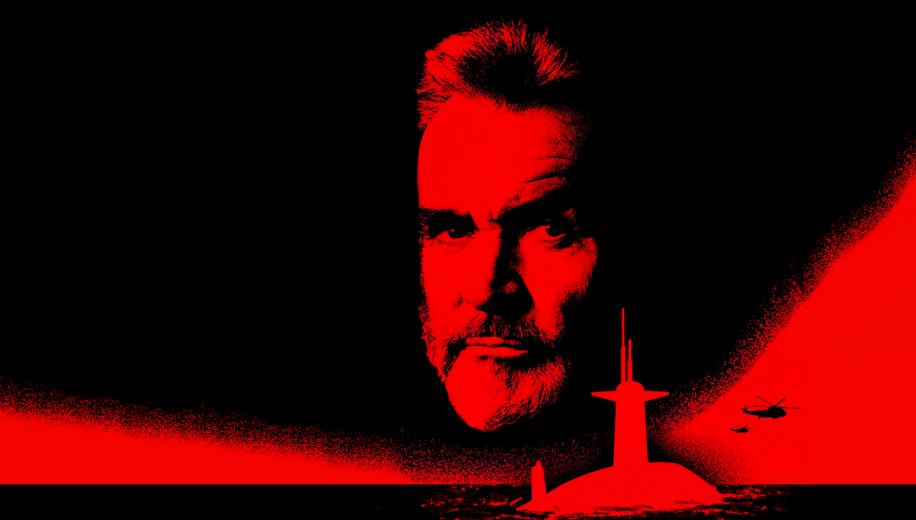 Although written in 1984, the late author Clancy's book The Hunt for Red October was set after the events in the 1987 book Patriot Games; a prequel story which arguably offered a far better introduction to Clancy's prized character of Jack Ryan. Indeed Ryan almost takes a secondary role to the character of Marko Ramius in Red October, a fact which turned off the original choice to play Jack Ryan - Harrison Ford (who would ironically go on to play the role in the next two films). He wasn't wrong; whilst a young Alec Baldwin's portrayal of Jack Ryan is suitably eccentric, understated and totally underrated, he's definitely not the star of the show, with Sean Connery at the top of his twilight career era game as Ramius.

Director John McTiernan, fresh from his success on Die Hard, certainly figured out a way to do what the Producers wanted - Top Gun with subs - making these whale-like behemoths move with a striking intensity, and engage one another with surprising furiosity. Notwithstanding the innate tension of claustrophobic films like Das Boot and Crimson Tide (and even the historically inaccurate U-571), this is, without a doubt, the greatest submarine action-thriller in existence (we'll see what Gerard Butler can muster in Hunter Killer).

Indeed, the only thing that comes even close in action terms is the seminal sci-fi classic Star Trek II: Wrath of Khan. You might not think about the Enterprise as a ‘submarine’, but the weapons and tactics of the ships are surprisingly similar (so much so that The Hunt for Red October would even be paid homage to in Star Trek VI: The Undiscovered Country, when an experimental Klingon Bird of Prey – capable of firing whilst cloaked – needs to be tracked).


An outstanding Cold War action-thriller that set high standards for the films that would follow.

Packed with great lines, a great cast, (James Earl Jones joins the cast as Ryan's boss Jim Greer, a role he would maintain across the Harrison Ford era, not wholly unlike the actors who played 'M' in Bond across the years) and some fantastically realised setpieces - no matter how many times you watch it, the scene where Connery's Captain orders the ship turn into the path of a torpedo is still a spectacularly tense moment, as is the 'blind' navigation he undertakes of the trenches - The Hunt for Red October is an outstanding Cold War action-thriller that set high standards for the Clancy/Ryan films that would follow.

The 1990 first film in the series, The Hunt for Red October, was shot on good old 35 mm film, and the film has been rescanned and mastered in 4K, which has been used here for this Ultra HD Blu-ray release.


It's not demo for the format, but it's the best the film has ever looked.

The Hunt for Red October was a relatively stylised film, given a surprisingly broad, epic feel through some of the wider shots and framings, but also frequently lensed with a softer look - particularly for the submarine scenes. This could be partly due to the set design, or just an intentionally claustrophobic moody, but the in-sub sequences are certainly softer, with the golden sparkle of the lights shining like bright stars in the black-dominated scenes.

Nevertheless detail receives a tangible uptick over the 1080p Blu-ray counterpart, picking up on skin textures and background flourishes and rendering them with a keen eye, affording us finer nuances that simply weren't visible before. Of course there's still a noticeable veil of grain that pervades the piece, but it only gives it some added texture and a suitably filmic feel.

The HDR and WCG attempt to make some difference, however, lending a vibrant feel to the red alert lighting on the sub, and all of the electronics, displays and buttons which pop with intensity, juxtaposed with the dark backdrop. Avoiding much of the crush apparent on preceding releases and redefining black levels with added shadow detail, it's a decent implementation of the tools, with Dolby Vision the cherry on the cake, but it can't excuse or make up for the strange colour timing which runs a little more drained than fans might be used to. It's not demo for the format, but it's still a strong presentation, and it's the best the film has ever looked by a country mile.

The Hunt for Red October, as with the other Clancy titles in this Jack Ryan Collection, and as with the 4K Mission: Impossible 5-film Collection, hasn't been afforded any kind of Dolby Atmos enhancement, with Paramount going that extra mile for Dolby Vision, but rendering the audio in the same shape it was in a decade ago for the Blu-ray release.


A very good, albeit far from exceptional, accompaniment.

Thankfully the original Blu-ray's Dolby TrueHD 5.1 was a very good, albeit far from exceptional, accompaniment which may well do a decent job with the material but is hardly demo quality. Dialogue is presented clearly and coherently throughout, largely dominating the frontal array where appropriate. Effects are well-observed, both in terms of the atmospherics – the perpetual hum of the submarine; the mechanical rumble of the caterpillar drive; the churning sounds of the vessels tunnelling through the sea; the persistent sonar pings resonating with insistence – and also the louder noises: explosions, gunshots and even stormy weather lighting up the array to create an even more engulfing surround experience. The score builds the tension well, emphasising the more suspenseful moments and highlighting the action. Surrounds get a fair amount of use; rears not as much, but they are still not neglected – and the LFE channel offers fine but unexceptional support to the proceedings.

The 4K disc ports over the old Director's Commentary, whilst you have to flip to the Blu-ray to get the original Documentary and Trailer.

The Hunt for Red October is a great Cold War thriller, a classic made during a period where filmmakers could still get away with having clearly defined opponents, even if the lines of good and bad are readily blurred between Americans and Soviets, with the threat of global annihilation very real, and the Cold War backdrop a much better arena in which to play such deadly wargames than anything the modern age can muster. Raking in over $200 Million to its mere $30 Million budget, the movie’s success would guarantee that the Tom Clancy / Jack Ryan franchise would continue, and it is a testament to the excellent narrative, sharp script, solid characterisation, superb acting and tensely directed action that the film still has such enduring appeal after almost 30 years.


The film still has such enduring appeal after almost 30 years.

Paramount's UK 4K Ultra HD Blu-ray release of The Hunt for Red October - at least for the time being - is only available as part of the 5-film Jack Ryan box set, but it's a highlight in the package, coming with a great native 4K presentation complete with Dolby Vision, and looking better than ever.

If you haven’t been introduced to Clancy’s world of high-tech military equipment, strategic manoeuvres and political machinations, and to his reluctant hero Jack Ryan; or to Connery’s powerhouse Captain Ramius, sub-commander extraordinaire, then now's the time to change that. Highly recommended.