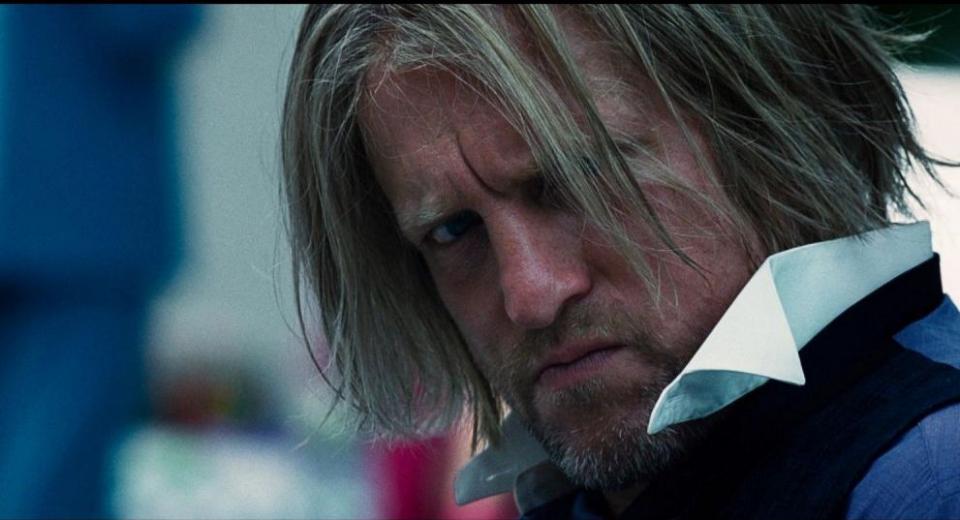 The Hunger Games comes to Region B-locked Blu-ray complete with a stunning 1080p/AVC High Definition video presentation in the movie’s original theatrical aspect ratio of 2.4:1 widescreen. It’s nigh on perfect, despite the quality often being obscured by the stylistic choices: Soderbergh’s second unit shots are more overtly gritty, and the shaky-cam efforts to keep this PG-13 rob the film of an ability to impress visually on Blu-ray with a perfect-10 rating. Still, detail is excellent throughout – even during the filtered and ‘enhanced’ shots – with superior fine object detail, pristine facial close-ups (check out the scrub-and-clean shots where Katniss is prepped for the ‘games) and some brilliant longer shots which seldom overtly betray the effects-heavy backdrops.

The colour scheme is clearly determined by significant grading that has been done to make certain scenes more blue-dominated (the training facility), others more dour and drenched in browns and greys (the opening and outer city shots), and others still brimming with greens (the ‘games themselves). Black levels are strong and solid, allowing for decent shadowing and night sequences. A little more 3D pop, and some touching up around the edges and this could have easily been grade-A perfection. Still, it remains impressive and reference quality through and through. The aural accompaniment is, unbelievably, even better. The DTS-HD Master Audio 7.1 mix is jaw-droppingly good, stunning both in its subtle touches and its bombastic moments – and even at the louder end of the spectrum displaying the kind of superior sound design that is almost unparalleled. Dialogue comes across clearly and coherently throughout, dominating the frontal array wherever appropriate (funnily enough there’s a rather unique second track option – a Dolby Digital 2.0 mix which has been ‘optimised for late night listening’ – a first for any Blu-ray release, but one which should assist those who still want to be able to hear the dialogue without bringing down the house when watching the movie in the middle of the night).

Effects are wonderfully observed. Not only do we get numerous crowd sequences – from the Olympic-like ‘games themselves to the crowds of people watching them in the satellite cities; from the riots to the roars of celebration – but we also get some superb atmospherics with the bustling wildlife and bustling undergrowth. The body blows, blade strikes and whizzing arrows are all clearly differentiated and nicely observed. The flaming fireball-popping sequence is totally overwhelming, the fire growling into your very living room, and the dog attack comes at you hard and strong.

The best moments, however, are peppered across the mix in varying shapes and forms: the powerful thrum of the huge aircraft hovering above you; the repeating call of the mockingjays echoing out across the array – making you feel as if you’re in the middle of a forest full of them; and the penetrating drum beat when one of the competitors falls, hitting you with varying degrees of intensity depending where you’re listening from in the arena. The score gives the surrounds yet more to do; the LFE channel is on duty almost throughout, and this is reference quality material of the highest quality. Did you enjoy the movie? Well then you’ll simply adore this mix. The Hunger Games comes to UK Blu-ray complete with a 2-disc package that basically equals the US equivalent, give or take a couple of throwaway extras. There’s absolutely nothing extra on the first disc beyond just an audio test facility. Fans should take the solace in the fact that they dedicated the entire disc to the film, I guess, because it means more space for the excellent video and audio that’s provided. Additionally, it’s not as if the US 2-disc release sports a great deal more on the first disc – aside from the same sound check there’s also a gimmicky add-on for smart devices. That said, a commentary would have been welcome – whether from the director, the writer, or the colourful cast, or any combination of the above.

Still, Disc 2 definitely brings out the big guns, arguably making up for anything lacking on the first disc, headlined by a massive, feature-length Documentary.

The World is Watching: Making The Hunger Games rolls in at a whopping two hours in length, an eight-part beast which arguably covers everything you would have wanted to be covered in a PiP video commentary track, only here in a more chronological order with respect to the production itself. It’s split into: Countdown, Casting, Design, Arena Ready, On Location in Panem, Effects, Post-Production, and May The Odds Be Ever In Your Favour. Amidst these segments we get pre-production discussions on the original novel, with input from novelist Suzanne Collins herself; casting discussions with contributions from the likes of lead star Jennifer Lawrence; training talk about how they prepared for the ‘Games; focus pieces on the effects and the stunts; background into the various locations; and some interesting discussions about the tailoring of the movie for a PG-13 market. Although it’s not without frilly EPK edges, there’s plenty of welcome information on offer here in amidst the padding, and fans of the film will certainly want to dip in and out of it.

Game Maker: Suzanne Collins & The Hunger Games Phenomenon is a quarter-hour look specifically at Collins’s popular work and with conversational input from both Collins and David Levithan from Scholastic Books Publishers.

Letters from the Rose Garden is a rather revealing little 9-minute addition, focussed on Donald Sutherland, of all people, and his bid to be in the movie after being moved by the script (!). Although I just about comprehend some of his ‘insightful’ comments about the movie, he does come across as if he’s reading a far too deep into the production, so much so that this wouldn’t have been out of place as a parody faux-Featurette.

Controlling the Games runs just shy of 6 minutes and takes us behind the scenes of the futuristic control room, a new addition to the tale which was not featured in the books because of the restrictions of the first person (present tense!) narrative.

A Conversation with Gary Ross and Elvis Mitchell is a quarter-hour interview with the director in interview talking about how he adapted the story and the process of bringing it to the Big Screen, as well as revealing some background into the shoot itself.

Preparing for the Games: A Director’s Process is a short 3-minute addendum which has the director briefly talking about the shift from being the screenwriter to the director.

Propaganda Film is ninety second faux promotional documentary – a fuller version of the video that plays out in the movie itself, with Sutherland – in character – explaining the background to the creation of the ‘Games in greater detail.

Here we get a Poster Gallery and a Photo Gallery, although there’s no sign of the Trailers that adorned the US release, just about the only extra that is missing on this second disc. The off-season Box Office hit of the year reaches Blu-ray to break up the silence while we wait for the sequel. Honestly, in a year of curious disappointments (Prometheus, The Bourne Legacy), Box Office bombs (Battleship, John Carter) and only infrequent quality blockbuster spectacles (Avengers, The Dark Knight Rises), The Hunger Games was a pleasant surprise. Jarring shaky-cam and Battle Royale story elements notwithstanding, don’t be put off – like I nearly was – by what you think this movie’s going to be like: it may well be a first instalment in the succeeding franchise to The Twilight Saga, but it’s far better than that toothless tosh in every way: from story to dialogue, characters to performances, direction to action. And it may remind you of everything from Hanna to Spartacus; The Running Man to Hard Target, but the end result is still a heady mix that warrants your attention, introducing us to a kick-ass new action-heroine and a promising future for this particular saga.

On Region B-locked UK Blu-ray we get a two-disc set which pretty-much equals the US counterpart. Don’t be fooled by the ‘Unseen Version’ banner, however – this is just the same 15-rated cut that played late during the original theatrical run in the UK, and the same cut that the US received all along under their PG-13 stamp. Indeed, apart from the lack of a couple of tiny extras – nothing vital – the releases are identical, boasting the same excellent reference quality video and perfect demo sound, as well as a second disc packed to the hilt with extras (including a Documentary that rivals the main feature itself in terms of runtime). Fans should already have this on pre-order – it’s a quality release – and those who have been avoiding this film because of their understandable Twilight prejudices should definitely check it out. It’s actually really good, and undeniably the start of something pretty special.