This isn't the first half of a climax; this is the definition of an anti-climax. 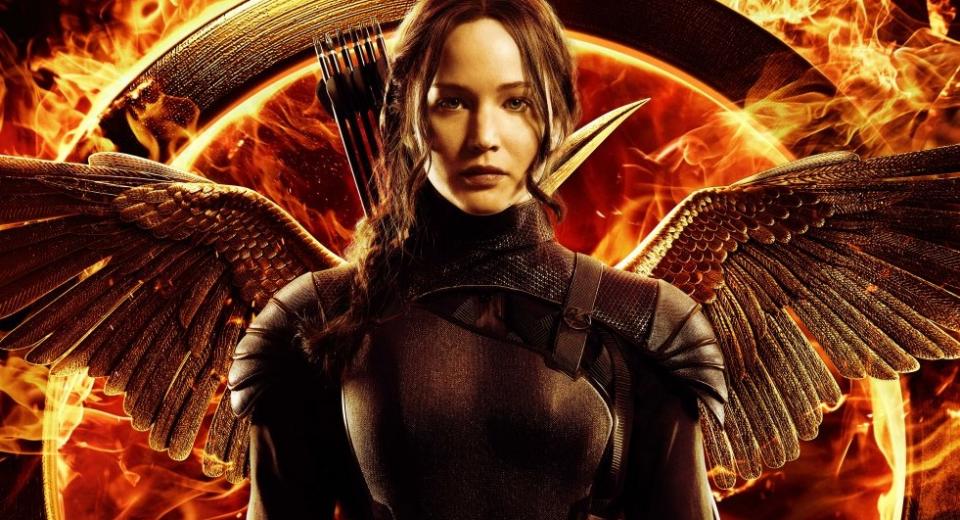 After the strong start and superior sequel I'm so utterly disappointed by this worthless follow-up, which plays out as nothing more than an extended PR campaign for Part 2's revolution; an utterly unnecessary money-driven Peter Jackson-esque expansion to a trilogy of tales that could have better been served by a TRILOGY of movies.

It seems par for the course these days that a popular series of books will have the film adaptations of their final instalments expanded into two films. It makes financial sense – fans are hooked in by the end of the first two, so why not instantly double the Box Office?

Twilight and Harry Potter arguably set the trend, and it looks like the Divergent series will follow suit (although perhaps the most ridiculous example is Jackson’s expansion of one book into not two, but three films – each then given further extended editions).
Sure, there are some films which could have done by being expanded into two (although not technically based on a book, Nolan’s conclusion to the otherwise superb Dark Knight Trilogy would have been better served by a fall and then a rise in two separate films) but these are the exceptions and certainly not the rule.

Fans of The Hunger Games were always aware of the fact that the third and final book was going to be split into two films, but largely didn’t mind, especially considering how impressive the first and – especially – the second entries were. Nobody anticipated a third entry being so utterly disappointing. With a story that simply doesn’t need to be told, Mockingjay Part. 1 plays out as little more than a selection of Deleted Scenes; the likes of which you’d maybe watch once on home viewing, and then never revisit again. The film manages to waste two whole hours, and actually only begins in the final few minutes. It should have begun with a daring Godzilla-esque assault, intercut with news broadcast footage of the ongoing propaganda campaign war being waged between the Capitol and the Rebels, but instead it dedicates the entire runtime to a tension-less series of propaganda efforts, as District 13 President Coin wields her new Mockingjay as a hero for the revolution against President Snow’s Peeta. Yawn.


I remind you: I was won over by the first Hunger Games. 8/10. And I LOVED Catching Fire. 9/10. And I can’t believe that I’m struggling to think of enough reasons to justify giving this a 6.

The character development is incremental at best, and could have easily been covered using tighter editing and better direction – a shock considering Francis Lawrence did such a great job with Catching Fire and perfectly balanced an hour of political intrigue and building the revolution, with an hour of action-with-consequence. In Catching Fire a single, offscreen gunshot highlighted more emotional punch than all of the dozens that are executed on-screen here. It's pure overkill. Indeed there’s absolutely no reason for the same man who already built the foundation for a revolution to then dedicate an entire movie to further building the revolution. It’s unnecessary. Worthless. Tedious. Tiresome. You’re watching a prelude to the main event, which you’re not going to see for another year. Worse still, the acting is almost universally terrible. These are the very same actors who have embraced their roles since the get-go, and yet here it feels like they just weren’t feeling it on the day. It feels like they were doing a warm-up, a rehearsal, and never got around to recording the final cut. Perhaps that’s somewhat understandable for the late Phillip Seymour Hoffman, but it’s doubly tragic that arguably one of his biggest roles (in terms of coverage) is one in which he seems so very muted. He was good in Catching Fire. Here, he just abides.

As I said, it’s not just him. In fact, the only exceptions are probably Jeffrey Wright, Stanley Tucci and Donald Sutherland, who slip back into their shoes just fine. Woody Harrelson and Elizabeth Banks struggle without their eccentricities, Sam Claflin’s Finnick opens the movie by crying unconvincingly, and Josh Hutcherson’s Peeta is relegated to TV soundbite duty for almost the entire movie. The biggest sins, of course, come from the Jennifer Lawrence / Liam Hemsworth camp. As a pair, there’s simply zero chemistry there. Nothing. Zilch. Whilst this is briefly reflected upon and used as a sub-plot point, there’s literally none of the conflict that was previously established thanks to the Katniss-Peeta-Gale love-triangle.


Ironically, in depicting the characters' struggles to provide believable emotional soundbites for the PR videos, the film puts a spotlight on the lack of conviction in the actors themselves.

And Jennifer Lawrence on her own? She genuinely appears to have lost that Katniss magic. Perhaps it doesn’t help that she’s played far more taxing and impressive roles (Silver Linings Playbook, American Hustle) and recently embodied a more interesting character in an action film (Mystique), so returning to The Hunger Games – arguably the franchise that made her – is actually a hard thing to pull off. She’s older now. We’ve seen her play older. And her character – Katniss – has already been through hell, and come out of the end as the symbol of a revolution. We don’t need to spend an hour watching her embrace the role; watching her torn between her emotional ties to single individuals – like Peeta – and the needs of the hundreds of thousands (if not millions?) who are depending upon her to bring flame to this cause. It’s a burden, sure, but she spends the duration acting like a prissy little spoilt brat; acting like she’s in a Twilight movie, not a Hunger Games movie. And I did not come around to loving the Hunger Games movies because they were like the Twilight movies – I came around to them because they didn’t need to be; because they could provide genuinely universally-appealing adaptations of young adult tales and not mute the more interesting adult aspects in favour of teen angst. Mockingjay is all teen angst. It’s all big gasps and childish wailing. It’s all way over the top emotion. Dammit, they even try and squeeze tension out of trying to save a cat – something which actually succeeds in robbing all of the tension from a scene which demanded tension.

There are so many missteps in this film it’s just painful to actually trawl back through my memory of them. I couldn’t wait for something to happen. And it did. About ten minutes before the film ended. They're the only ten minutes that are really necessary to see before Part 2. The rest was an utter waste and I’d have genuinely preferred to wait and watch a three hour complete Mockingjay in November 2015 than watch this. All it's succeeded in doing is giving me doubts about a franchise that I previously couldn't wait to see the rest of.