Does have entertainment value for a one watch wonder 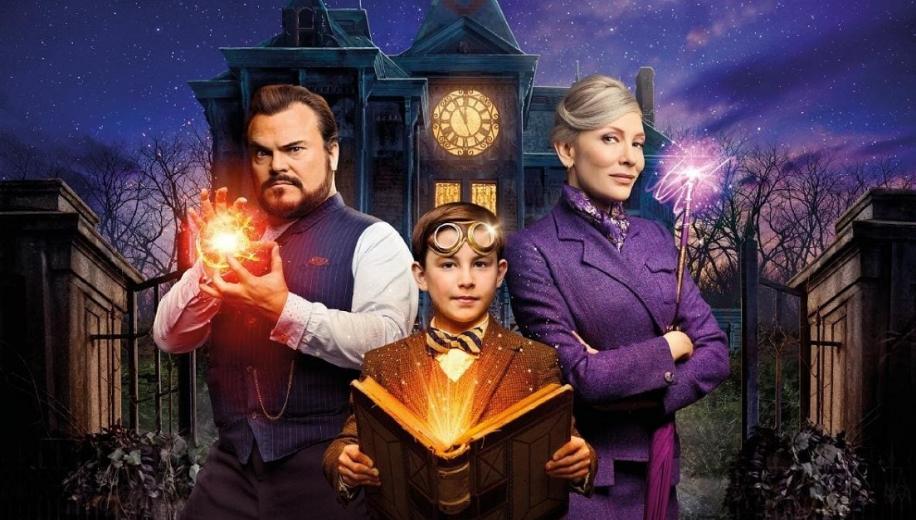 The House with a Clock in Its Walls UHD Blu-ray

The House with a Clock in its Walls 4K Film Review


Known for excessive violence and ‘torture porn’, director Eli Roth swaps what he is best known for to helm the family friendly The House with a Clock in its Walls starring Jack Black, Cate Blanchett, Owen Vaccaro and Kyle MacLachlan. Based on the novel of the same name, by John Bellairs, the story, set in post war USA, tells of Lewis Barnavelt, a recently orphaned 10-year old, who goes to live with his estranged uncle, only to discover a hidden world of witches, warlocks, magic, both dark and light, and unwittingly stumbles into an end of the world portent triggered by his own desire to find friendship.

On the face of it, The House with a Clock in its Walls has everything a family friendly adventure film has to offer; magic, whimsy, interesting characters, a well-trodden story told with conviction, a bevy of well-known faces, etc. but when all together it doesn’t quite match up to the sum of its parts. I’m never a fan of toilet humour and here it seems forced and unnecessary (pretty sure the very younger viewers will get a kick out of it, but then the film isn’t really aimed at them …), there are entire scenes devoted to nothing but exposition, but, perhaps its greatest sin, is that it is missing that heart that so many great family films contain.

Of course, it is not all bad. The leads do extremely well with their respective characters, Black is typically Black, he knows little else, Blanchett is a delight with her tragedy, MacLachlan makes for a terrific boo-hiss villain and, relative new-comer, Vaccaro holds his own in amongst these heavyweights. The sets have a distinctly ‘Harry Potter’ feel, that is no bad thing, and Roth makes the use of his horror up-bringing to delve into the shadows ramping up the creep factor. There is a reasonable sense of pace and some clever little set-ups and pay-offs.

I do get the feeling that it is trying too hard, though, there is a lot going on throughout the run time, what with every character having a tragic backstory to tell, plus the various red herrings sewn in, and it might have fared better with a little more streamlining and a wee bit less exposition; but perhaps I’m wanting too much in what is aimed fairly and squarely at children. It does have some entertainment value, but for me, a one watch wonder.

The House with a Clock in its Walls 4K Picture Quality The House with a Clock in its Walls was shot digitally using a combination of Arri Alexa Mini and SXT cameras with a resolution of 2.8K and finished as a 2K DI, which has presumably been used here for this Ultra HD Blu-ray release. The disc presents an up-scaled 3840 x 2160p resolution image in the widescreen 2.39:1 aspect ratio, and uses 10-bit video depth, a Wide Colour Gamut (WCG), High Dynamic Range, and is encoded using the HEVC (H.265) codec for HDR10. We reviewed the Region free UK Ultra HD Blu-ray release of The House with a Clock in its Walls on a Panasonic 65DX902B Ultra HD 4K TV with a Panasonic DMP-UB400 Ultra HD Blu-ray player.


Detail on this 2K upscale is better than the Blu-ray


Even for an up-scale the detail on this UHD is finer and demonstrates more texture than the Blu-ray image. Staples like skin texture and clothing weaves are immediately improved, but background tautness, such as the edges of the automatons, book coverings, wall paper or school corridor coverings show keener edges. Location shooting, not that there is much, demonstrates sharper edges to trees, buildings, cars etc. and whilst this up-turn in detailing is good, the real difference is with the WGC and HDR.

Colours have a depth and immediacy that the Blu-ray can’t hope to capture: the purple of Zimmerman’s dress, or, especially, her wand, the earthy hues of the house, indeed all the primaries are defiant. Black level is very deep, adding a strong depth of frame, while holding some decent shadow detail, while the white end is even better showcasing strong highlights that push the image out. Check out the ‘universe in the garden’, or ‘controlling electricity’ or any location shot.

Digitally there are no compression issues, neither is there any banding. The source is as clean as a whistle, with the only real niggle being the added definition highlighting some CGI inconsistences. But on the whole a very pleasing image.

The House with a Clock in its Walls 4K Sound Quality Rather disappointingly the disc only supports a DTS-HD MA 7.1 surround track, compared to the USA’s Dolby Atmos, it is however, still pretty good. There is a tangible sense of atmosphere around the house, with the various clocks, and magical artefacts, provided for by the surround speakers. It is with the hidden clock that the real meat comes though, the deep, thunderous ticking or the chimes add significantly to the bass level. Indeed bass is tremendous with plenty of LF effects, pretty much all subterranean.

Dialogue is well handled and prioritised to the frontal array, while stereo effects are pinpoint accurate around the room, be it wondrous magic, puking pumpkins, chattering automatons or the mechanisms of the hidden clock at the climax. The score, too, makes full use of the speakers and dynamic range. In all this a clear reference track, but loses a mark due to there being an Atmos track available and one can only wonder at the effect the extra channels would give.

The House with a Clock in its Walls 4K Extras Audio Commentary - Director Eli Roth and actor Jack Black discuss the film from conception to finished product and while it is at time a little scene specific, Black’s irreverent humour keep it light and entertaining.
Deleted Scenes – 10 in total that can be played all together, individually, with or without commentary from Eli Roth and Jack Black; titled: More Books, Please, A Horrible Practical Joke, Tarby Ditches Lewis, Eat Up, Play for Him, Get Out of the Way, Time Is of the Essence, The Clock That Never Breaks and 12 Minutes to Go.
Gag Reel – Three and a half minutes of bloopers and goofing off.
Warlocks and Witches – Four two minute snippets that look at the casting of the main characters; titled: Finding Lewis, Jack's Magical Journey, The Great Cate, and The Terrifying Eddie Izard.
Movie Magic – Five two minute features that take the briefest look at aspects of production; titled The Ultimate Haunted House, Automatons Attack, Pumpkin Puke, Moving Pieces, and Baby Jack.
Tick Tock: Bringing the Book to Life – Three and a half minutes on the source novel and what it took to bring it to the screen.
Eli Roth: Director's Journals – Six one minute features with the director telling us about various aspects of the production; titled: Candler Mansion, Newnan, GA, The Chair, Comrade Ivan, New Zebedee Elementary, and Wrap Day.
Owen Goes Behind the Scenes – Four one minute features which sees Owen Vaccaro looking around the various sets; titled: Around the Set, Behind the Camera, The Big Interview, and Downtime on the Set.
Theme Song Challenge – Cast and crew create a theme song for the film in this 3 minute feature, participants are: Eli Roth, Jack Black, Owen Vaccaro, Kyle MacLachlan, and Lorenza Izzo.
Do You Know Jack Black? – Four minute feature with Owen Vaccaro, Kyle MacLachlan and Lorenza Izzo as they try to answer questions about their co-star.
Abracadabra! – One minute with Roth performing a magic trick for Vaccaro.
Jack Black's Greatest Fear – One and a half minute feature with Vaccaro and Roth as they prank Jack Black while on the set.
The Mighty Wurlitzer – Two minutes with composer Nathan Barr as he discusses the famous instrument's history before looking at its restoration and use for the film’s score. Roth also participates. The House with a Clock in its Walls, based on the novel of the same name, tries very hard to win you over; it is filled with whimsy, delves into its characters and delivers a well-trodden story with conviction, but with the addition of some toilet humour and, crucially, missing that heart of a great film, at the end of the day only remains watchable and entertaining, and perhaps then, only once.

As a 4K UHD set, the package from Entertainment One is, with one caveat, pretty good. The up-scaled image is tremendous, with an up-turn in detail and HDR bringing to life the colours and black level that betters the Blu-ray at every turn; the sound track is ‘only’ DTS-HD MA 7.1 (compared to the US release which is Dolby Atmos) but is engaging, provides a terrific surround-scape, is bass heavy and well realised. The extras look plentiful but are all very brief and barely scratch the surface, but do have some value. If it were not for the US disc this would be a demo worthy addition.