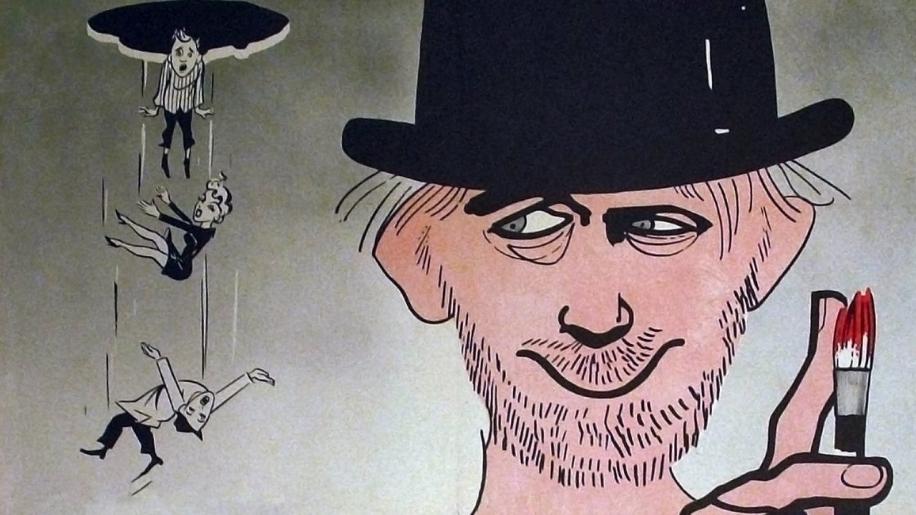 The Horse's Mouth makes its debut on UK DVD with a 1.66:1 anamorphic transfer that shows its age despite some occasionally bold colours and a nice level of detail. The film retains its grain, but suffers from the odd wobbly scene dissolve and some contrast wavering. Damage to the print exists in the form of pops and speckles - one especially annoying white dot appears in the right hand side of the image during a lengthy spell in the third act - and a hair appears on the bottom of the lens for a few seconds at one point.

Transfer-wise, the image suffers from some edge enhancement, blocking in the darker portions of the frame and a touch of aliasing which is evident when Cookie's woolly-hat is seen moving against the wall and door of Sara's living-room. Colours are generally a tad muted, unless they are being applied to Gulley's artwork, in which case, they do tend to pop from the screen. But, aside from the wacky paintings, the primaries are definitely “off”. Here, London buses appear orange, not red, as do the phone boxes. The skies have lost their sheen and can look a little alien, too. And have a look at the hairy ginger student who comes to help out during the finale - no-one, but no-one has hair that colour, not even an orang-utan with a finger in a plug-socket glows that much!

Blacks generally aren't very good either, but if you think that this looks like a terrible print, then you have to remember how old it is and the relative lack of restoration that it has undergone. Whilst I would certainly have loved a cleaner, more balanced image than this one, the transfer's detriments do nothing to lessen the film's ability to entertain.

Criterion also have an edition of the movie, but I don't know how its image compares to this, I'm afraid. Equipped with 2-channel mono, The Horse's Mouth suffers few age-related problems. There are moments when voices come over as harsh and almost barked-out by their characters, and moments that are tinny and recessed within the mix. But, on the whole, dialogue is easily discernable and the jollity of the classical music employed by the soundtrack always has a degree of buoyancy and ebullience.

One small segment during the sequence when Gully is instructing the youthful recruits on his grand project suffers from a sort of “droning” noise in the background. I wasn't entirely sure what this was, or whether or not it was actually intentional - there are supposed to be diggers and the such-like in the vicinity so, presumably, it could have belonged to one of them - but, either way, it doesn't last long and doesn't really distract. The whistling of the drunken old sailor as he pipes Jimson aboard his boat sounds nicely shrill and penetratingly pitched, although the odd car horn or the shouting of “Stop, thief!” in the street near the start have hardly any impact or presence.

To be fair, though, this sounds more than acceptable for a film from 1958 that is primarily talk-driven. The Criterion Edition features a brief interview with director Neame, but this Eureka disc has nothing other than the movie, I'm afraid. A quirky oddment in Guinness' canon. He paints his character broadly and supplies him rich colouring and a rough texture that has to be admired from up-close, rather than from a distance. You have to be patient to peel back the layers that are there, but the end result, which forever seems to be teetering on the brink of some inevitable tragedy, cannily dances just out of convention's reach, ensuring a persona that is bubbling with rebuttal, wit and a manic sense of riotous ethical deviation. It is a performance out of which the film is born and, basically, just a large gulp of pantomimic indulgence for the accomplished actor who, it seems, just wants to live it up in the mindset of a rogue for a spell. But the script remains exceptionally fast, inordinately "British" and wildly acerbic.

Eureka's disc offers no extras and a transfer that cannot belie the film's age and relative lack of status. Colours seem “off” and there are various other bugbears to contend with, but none of this detracts from a film that sweeps you inside its whimsical spell and deposits you back in the grey world that Gulley Jimson so reviles, amused and weirdly satisfied come the final credits.