The journey that started it all. 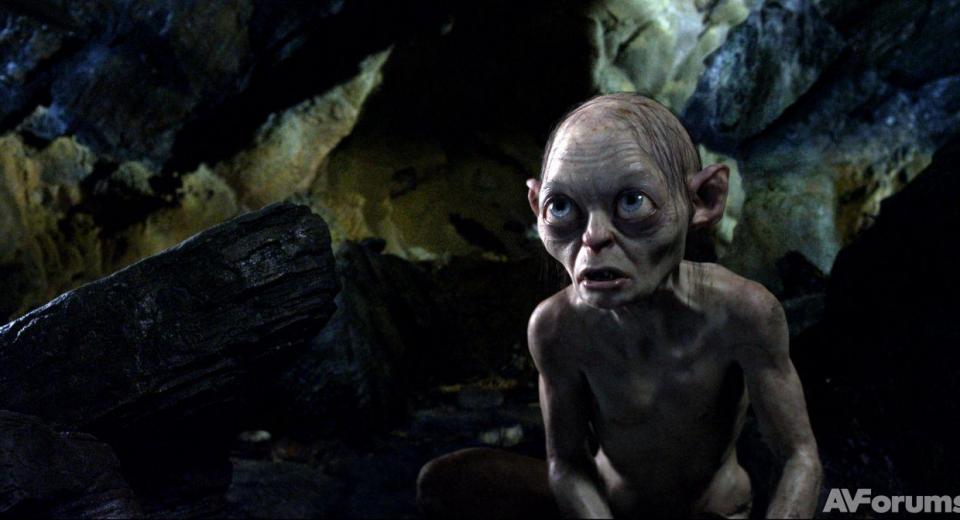 These comments are based upon the UK 3D release, reviewing both 2D and 3D versions. Comments may not apply to other territorial releases. The 3D movie spans two discs, but the split is in a logical place and serves as a useful interval to go and get another packet of snacks and a beer!

Without doubt this is a stunning looking disc, in both 2D and 3D. The AVC-MPEG transfer is pretty much flawless, with excellent image quality and even allowing for the 48fps – 24fps “conversion”, there is no instability or strobing on even the fastest moving scenes. This is true for both the 2D and 3D discs. The Red Epic 5K cameras used have resulted in extremely smooth shots, with high contrast and plenty of detail, even in the darker sections of the movie. Brightness and contrast are strongly controlled, while depth of field is extremely deep, due to the 3D nature of the movie.

The set design and use of much of the native flora of New Zealand makes the settings are realistic as you could ever want. Where Hollywood needs to CGI in the backgrounds, or at least edit out signs of habitation, there are vast swathes of New Zealand that never see a human from one year to the next. You will simply not believe that some of the scenes really do exist in reality, from the plunging waterfalls, to sub-tropical grasslands with a distant view over snow covered mountains. Only in New Zealand do you find a glacier running through a rain forest!

Moving to the 3D, things are not quite as perfect. While still very good, the 3D does not have as much depth or pop out as some discs, although it is easy on the eye. The main issue is for me that the CGI does not look quite as good as it does in 2D. There are a few issues around depth perception, where CGI has been dropped into a scene shot in 3D. Some of the goblins in the later scenes feel quite flat compared to the live action surrounding them and a few of the complex CGI shots – some of the larger wides, look unconvincing. I am nit-picking here, as exactly the same could have been said about Avatar, but that was very much a first generation film and the techniques have been honed and improved somewhat since then.

This is one of those films that seems to work better in 3D than 2D, which is unsurprising given as it was shot as a reference high frame rate 3D movie. It is extremely good despite my few reservations and the colourful opening scenes in Bag End will really show off your 3D system at its best. There is a certain “Middle Earth” whimsy to the musical score, and it romps along quite happily for the most part. It fits the pictures well, but does not always work to heighten the tension quite as much as it could do. Tolkien used a lot of Anglo-Saxon folklore in The Hobbit, as well as some Germanic and Nordic influences as well and these seem to come across more in the score than any other part of the movie. Tim Finn sings the title song over the end credits, but to be honest it’s not a high point of the movie.

The DTS-HD MA 7.1 stream is competent enough and is fairly dynamic, although possibly not class leading. It is quite a commercial mix, with some peaks compressed and the LFE not taken to the max, possibly in recognition that this disc will have a wide release, including many who will be playing it on lesser systems that simply do not cope well with the strains a full on soundtrack can induce. Voices and dialogue are clear throughout, but I have heard wider and more encompassing surround tracks. The spaciousness that Brave for instance imbues from its Dolby True HD Atmos mixdown is missing to a certain extent here, even if effect placement is extremely accurate. The Extras are all contained on a separate disc, making this a 4 disc SKU – 2 for the 3D movie, 1 for the 2D plus the extras. All are Blu-ray and extremely high quality. The plain white lettering on black discs makes identifying them in a darkened room quite tricky though and looks rather plain compared to the rest of the packaging.

Despite its own disc, the extras are quite limited at first glance, with just the video blog, New Zealand locations short, plus games and movie trailers. It is only when you realise the blogs run to over two hours –in full HD, that you get to understand the scale of things.
Blogs: Essentially an extended making of, following Peter Jackson through the process. Very open and interesting, each around 10 minutes long and released during production of the movie, the section runs to over 2 hours and are really fascinating viewing. Jackson does seem to age around 5 years during the production, such is the stresses of producing and directing such an epic movie. As the blogs progress, the repartee between the performers and production crew grows and the series takes you all the way through to the launch, exploring virtually every aspect of the movie making process, with the possible exceptions of the script development and negotiating for the money in the first place.

Locations: New Zealand offers such an incredible range of terrain, with space to shoot really huge vistas. Fiordland down in the South Island still has areas that no one has ever stepped foot on, while the volcanic regions of the North Island provide a range of desolate, yet colourful landscapes. If you thought you saw all the interesting parts of New Zealand in Lord of the Rings, think again, this country has more to give!

Trailers: Films of this magnitude have plenty of teasers and trailers, so here’s a fairly comprehensive selection to browse through. The accompanying video game is also covered.

Not a bad selection, but hardly ground breaking. There is nothing in the way of Director’s commentary or “Maximum Movie Modes” where one can explore behind the film a little further, but for a film running to the best part of three hours, this is not too surprising. Language support is also a little limited on the movie discs, comprising just English, French, Italian and Chinese plus subtitles in Dutch on the 2D disc, plus Hebrew, Romanian and Bulgarian on the 3D. A worthy companion to the Lord of the Rings series and thoroughly absorbing. It does feel a little slow starting and even later on, as the pace picks up, the editing could have been tighter without losing anything in terms of plot or coherence. It does feel like the technology got in the way of making a really good movie occasionally, as 3D camera rigs are not great for close up, hand held work, bringing the view almost into a first person view while the increased depth of field for 3D lessens the cinematic impact considerably.

Technically, this film looks and sounds excellent, but does not represent a step change over what is already out there – at least on Blu-ray. High Frame Rate cannot be reproduced on current equipment, so the 24FPS conversion looks no better than any similar releases. The sound is extremely well produced and the 7.1 surround mix is very good, but not as spacious as some. The extras are good in terms of content, but lack the creativity and interactivity that some releases bring as well.