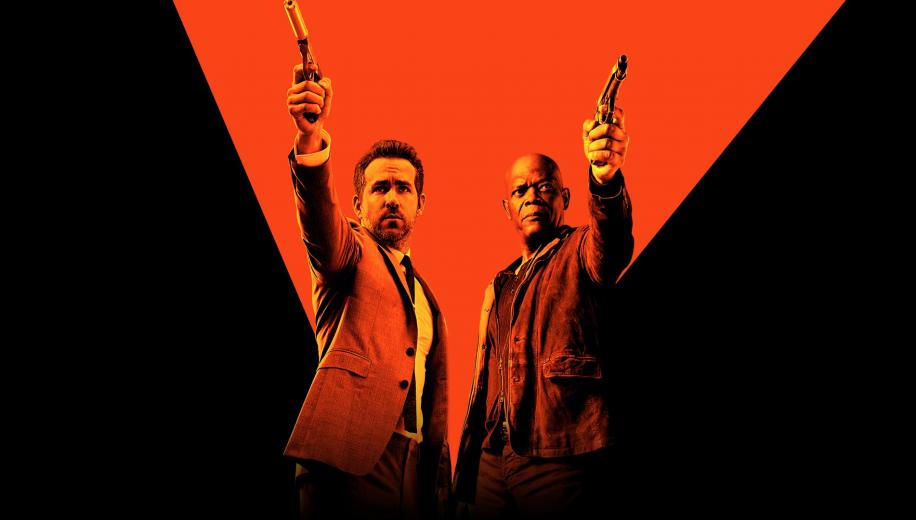 The Hitman's Bodyguard is a fun ode to Midnight Run and 48 Hours that sees Ryan Reynolds and Samuel L. Jackson having a blast.

It's great to see a nice on-screen pairing, with only a few modern actors capturing the kind of chemistry that Robert De Niro and Charles Grodin or Eddie Murphy and Nick Nolte exhibited in those classics. We saw a glimmer of it between The Rock and Statham in Fast and Furious 8, but The Hitman's Bodyguard turns it into a full-time gig, seeing Ryan Reynolds' beleaguered bodyguard forced to protect one of his most hated enemies, Sam Jackson's master hitman, attempting to escort the latter to a hearing at the Hague, so he can testify against Gary Oldman's war criminal.
Packed to the brim with engaging banter - most of which hits the mark, and some of which is laugh out loud funny - and several fun action sequences, both Reynolds and Jackson are on great form, with a special shout out to the still-gorgeous Salma Hayek, who rivals Jackson in the how-many-swear-words-can-you-get-into-one-sentence department. It's a frivolous piece, that doesn't break the mold, redefine the subgenre, or leave a lasting impression, but it's still a thoroughly entertaining film, far more so than it has any right to be.

Shot digitally at only 3.4K, and unfortunately afforded only 2K rendered VFX, The Hitman's Bodyguard is still that relatively rare modern film that is not constrained by the limitations of a 2K digital intermediate, instead afforded a 4K digital intermediate that leaves it looking as good as it possibly could.

Detail is afforded an at times subtle, at times more distinct uptick over the standard 1080p Blu-ray counterpart, giving close ups on faces, skin, hair and clothing weaves and background textures more precise definition, bringing better clarity and better nuance. And that's before we've looked at the highlights that come from the presentation's use of High Dynamic Range (HDR) and Wide Colour Gamut (WCG). For those with a suitably equipped player and TV, the disc even boasts Dolby Vision.

Interestingly, the uptick in detail is sometimes more noticeable than the increase in colour vibrancy, although there are exceptions in more stylised sequences bathed in specific hues and more vivid tones. Skirting similar problems associated with some shot-on-film 4K releases, which occasionally have the unintentional effect of accentuating the grain to levels bordering on noise, there are a couple of sequences where the digitally-added noise is more prominent than on the corresponding Blu-ray. However this relatively minor niggle may curiously stem from the same source as the problems with the CG being slightly more noticeable, namely, the fact that the VFX was only rendered at 2K, which means that, unlike much of the 3.4K native digital cinematography, it's been upscaled here and made marginally more obvious as a result.

Aside from that, the limited budget of the piece does leave the style and thus picture quality variable from shot to shot, with some scenes seemingly given a soft focus filter, whilst skin tones can get a little pasty through this application of stylised contrast, but perhaps that's just the effect of Ultra HD - no amount of makeup can cover up pasty skin in this resolution. These are generally and comparatively small niggles in what is still a largely impressive presentation. It may not quite reach reference material, particularly when you notice these problems, but when it's at its best, it still hits demo standards.

The Ultra HD Blu-ray release affords the film the same impressive immersive Dolby Atmos soundtrack that the accompanying Blu-ray carries (which is, itself, a nice touch for Blu-ray fans who are merely buying UHD to be future-proof, but who still want to enjoy the Atmos track) founded upon an outstanding Dolby TrueHD 7.1 core which already provides demo thrills.


Demo audio and reference through and through

Dialogue - notably the extremely witty back-and-forth banter between the leads - gets keen prioritisation across the frontal array; presented clearly and coherently throughout from across the front three channels, whilst the somewhat generic score still energises the piece, giving the surrounds plenty of background material to keep them engaged, and lending pace to the action. Effects are superbly observed, picked up keenly and afforded both power and precision, brimming with ballistics as bullets thunder across the soundscape, whilst a few more explosive crashes and bangs carry further LFE weight. Demo audio and reference through and through.


The extras tick all the key boxes

Headlined by an Audio Commentary by Director Patrick Hughes, we also get a selection of short Featurettes, which are a little bit fluffy but do afford some background information and interview snippets, dipping into the premise, the two lead characters, the two main female characters in the film and the stunts and action sequences. The disc is rounded off by a fair few Deleted, Alternate and Extended scenes, as well as some funny Outtakes. A thoroughly entertaining piece; far more so than it has any right to be

Lionsgate deliver The Hitman's Bodyguard to UK shores with an excellent Ultra HD Blu-ray release that sports superb video and outstanding audio and kindly ports all the decent extras onto the Ultra HD Blu-ray disc itself, for a change. The movie is a lot of fun, and well worth checking out.