The Hitchhiker's Guide to the Galaxy Movie Review 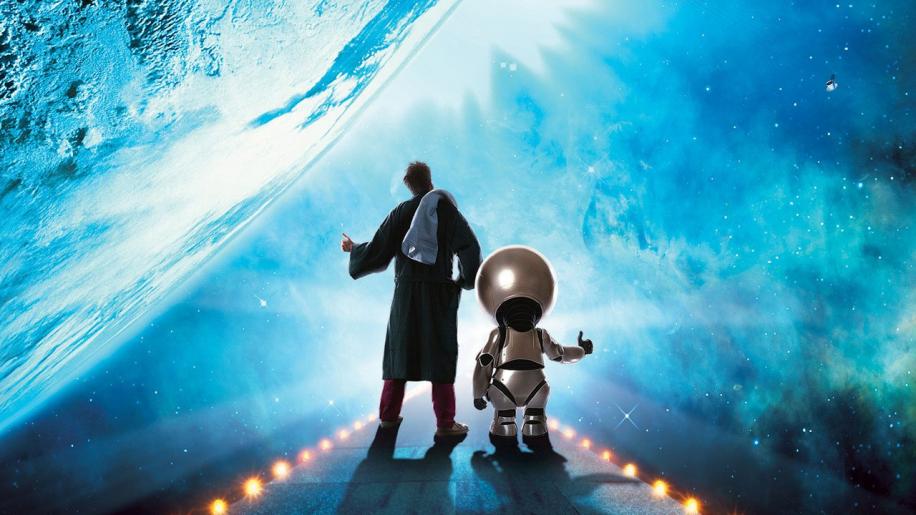 The Hitchhiker's Guide to the Galaxy Movie (2005)

The late, great Douglas Adams passed away a few years ago, several decades after he wrote his biggest hit - The Hitchhiker's Guide to the Galaxy. Originally penned as a radio show, he went on to write it in book form and the first three books soon became four and then eventually, five, to complete a collection of fantastical sci-fi tales about life, the universe and everything. The original radio show is commonly regarded as the best version to reach audiences - mainly because you are able to use your imagination to visualise the amazing Adams characters and worlds rather than see it interpreted for you. In the Eighties they made a TV series, which also proved popular with audiences despite being low budget. Then, not long after the TV show, work began on a cinematic production. Over two decades later and this is what we have.

Arthur Dent is a mild-mannered Brit who is desperate to prevent his house from being demolished to create a new bypass. When one of his close friends, Ford Prefect, turns up to tell him that he has bigger things to worry about, he finds that hard to believe, but when the Earth is destroyed to create a new intergalactic bypass, he slowly realises that Ford might have had a point. So begins the fantastical journey of an average middle-class individual who just happens to be the last man alive. Prefect, it seems, is an extra-terrestrial book contributor who is researching for the latest edition of the aforementioned Hitchhiker's Guide - and who gets himself and his best friend, Dent, off the planet Earth seconds before it is vaporised.

As if it wasn't enough to have your home planet destroyed, Dent soon finds himself running from the relentless Vogons, a bureaucratic race of poetry-lovers who were involved in the construction side of the intergalactic bypass that saw the removal of Earth. Hitching a ride on a passing ship, which happens to be piloted by President of the Galaxy, Zaphod Beeblebrox, Dent and Prefect are assumed to be kidnappers and soon all of them are being pursued, along with Zaphod's assistant who also happens to be the last woman on Earth and happens to know Dent. Confused? The Hitchhiker's Guide is ostensibly about one man's voyage of self-discovery in a supernatural world of alien races and foreign planets, but if you boil it all down, it is really just Adams' surreal imagination exaggerating his own twisted vision of the world and its many faults. It is genius.

As the latest interpretation, this new feature film all but overwrites any previous visual incarnations. It is a high budget, glossy, inspired rendition of a much-loved classic that should please fans and newcomers alike. Brimming with Monty Python-esque surrealism, the strongest point of the production is its adherence to the source material, not least in populating the drama with brief animated excerpts from the Guide itself narrated by none other than Stephen Fry. These moments are often gut-bustingly hilarious and are easily the highlight of the film. Other simple gems include the improbability drive, which has some hugely random and largely hilarious side-effects, including an ingenious scene where everything is comprised of wool. Even the new concepts that I do not remember from the original books (the introduction of the Vice President, the other presidential candidate and the 'emotion' gun do not seem familiar) are perfectly in line with the thinking of Adams himself - who made many of the changes himself when writing the movie script - and not in the least bit incongruous with the rest of the adventurous rollercoaster-ride plot.

Of course casting of a ready-made classic like this has to be perfect and they did a pretty good job in that respect. Arthur Dent is really the hero of the show and even though he is very much reluctant in that regard, his underdog status gives him automatic appeal with audiences. It is only right then that the actor who played the underdog hero of the Office, Tim, be given a shot at the title here and Martin Freeman puts in a solid performance. I have to say that he did not change his character here a great deal from what we have seen him do before in The Office and Hardware but nevertheless he suited the role, although his interpretation is slightly different from that done by the actor who played Arthur Dent in the original TV series (and who also gets a brief cameo here).

He is ably backed up by Sam Rockwell, on manic form as President Zaphod, kind of throwing everything from Elvis to James Brown into the mix to create his own unforgettable version of this character. His one disadvantage - and it is nothing to do with his acting ability because he carries off the lovable despicable roguish arrogant part with aplomb - is his duplicity of heads. Yes, he has two heads. In the original TV series they were side-by-side on his shoulders but here, as most will have probably gathered from the trailer (but if you don't want the spoiler, skip ahead) his second head is below the first, which flips up to reveal it. This is a perfectly fine detour from what we would have expected, except for the fact that the CGI is abysmal, the second head looking like a small LCD display with a face on it. I found it easier to suspend disbelief with the TV version. It is a fatal flaw that the important character of Zaphod Beeblebrox and the acting talent of Sam Rockwell could have both done without.

The real surprise in acting comes from the new version of Ford Prefect, however, who we find to be played by the Hip Hop artist Mos Def. He has a natural acting talent (rather like Jackass' Johnny Knoxville), sauntering his way through the proceedings as if he were slightly drunk and slightly stoned in his portrayal of the alien who has human form. He simply nails the part and is the best character in the movie by far. Aside from these three we get the last girl alive, self-named Trillian, played with equal parts sassiness and vulnerability by relative newcomer Zoeey Deschanel and the ship's emotionally enhanced robot, Marvin, who clearly has his chip set to 'depressed' and is voiced to perfection by Alan Rickman.

In the smaller roles, John Malkovich hams it up as Zaphod Beeblebrox's Presidential rival Humma Kavula - a character Adams created especially for the movie - Bill Nighy underplays it as the planet-builder Slartibartfast (during the single grandest effects sequence in the movie), Helen Mirren provides the voice of the supercomputer, Deep Thought, that has been programmed to find the answer to the Ultimate Question (42) and the cast from The League of Gentlemen are once again under heavy prosthetics playing the bureaucratic Vogons (who are intentionally made to look like fat old judges and politicians). Then of course there's Stephen Fry, the perfect choice for the voice of the ludicrously surreal Hitchhiker's Guide itself. It is a pretty well-selected cast for a nicely realised vision of a superb literary work. We've waited the two decades for this and - to be honest - aside from the issues over Zaphod's second head, it is well worth the wait. Bring on the next instalment.