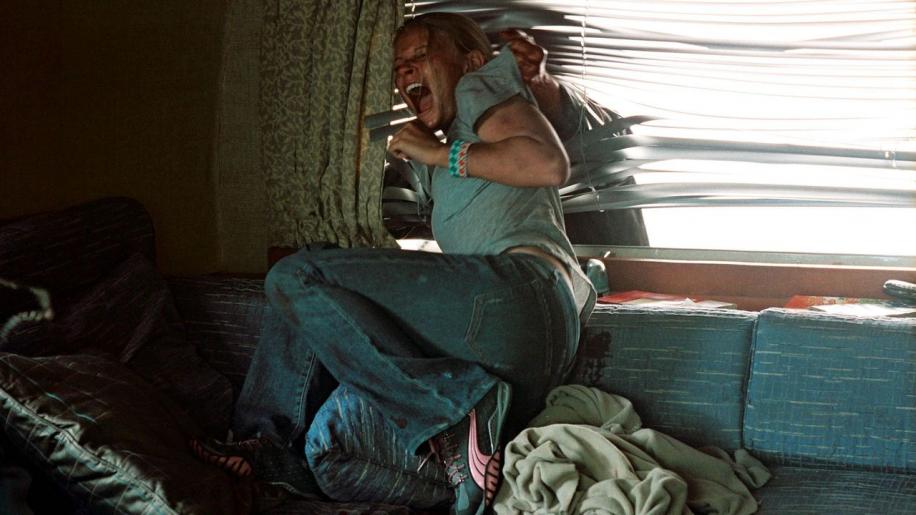 Presented in anamorphic 2.35:1, The Hills Have Eyes 2006-style can look staggeringly good at times, and irritatingly average at others. The deserts of Morocco, doubling for New Mexico, look astonishingly crisp and sharp, with a real sense of depth and starkness well served by the transfer. With a colour scheme that is predominantly orange, yellow or ochre, the visual look of the film is one that scorches the screen. Don't be fazed by the many high contrast glare-outs that take place, as I am sure these are all perfectly intentional, serving to enhance the heat and isolation of the desert. Reflections look fine, skin tones are exquisite and blood is rich and deep.

Edge enhancement poses no problem whatsoever, even on the biggest screens, and there are no issues with compression, smearing or dot crawl, amounting to an image that more than hold its own considering the harsh filmic style it has to contend with. But the problems that do arise are exhibited whenever there is a night-time scene. And these reveal a sudden drop in detail - with backgrounds like the gas station, the camper and rock-strewn terrain all losing clarity and definition. These sequences also suffer from a smattering of grain that isn't apparent at all during the daylight scenes which, thankfully, run for the majority of the movie. Black levels are good, however, but the night-time scenes are still something of a let down.

All in all, though, Fox have delivered Hills with a good-to-ravishing transfer.

The DD 5.1 mix for Hills Have Eyes is everything you could wish for, really. Every scream and every gunshot echoes with power and clarity around the set-up, the fiery execution and the big explosion have plenty of oomph and presence, dialogue is always clear and well-steered and the multitude of body-impacts from axes, fists and people - notably poor Doug - getting smashed through doors and walls are weighty and realistic. For a horror film, Hills is pretty bombastic.

Directionality is smart and on the ball - listen to the separation of voices and echoes in the desert and, again, the bone-busting dust up between Doug and Pluto, and then, after all that, the even more indestructible Lizard. Particularly nice is the whiplash slashing of the horrible-looking chain of tyre-spikes that Lizard wields. The score is marvellously realised, issuing strongly and reliably from all around. It gets cranked up quite a bit too, amping up the tension throughout the many violent set-pieces and creating an genuine atmosphere of dread and unease.

The film carries two commentaries. The first is from Aje and screenwriter/art director Gregory Levasseur and producer Marianne Maddalena and, to be honest, I expected more from it. The three ramble through the proceedings, shedding some light on the production in tones so un-engaging that I found myself reaching for the skip button many times. Frankly, this is an unexpectedly dull track and not one that I would listen to again.

The second chat track, by producers Wes Craven and Peter Locke - the team behind the original, who also enjoyed involvement with the remake - is much, much better, if only because the two have a sense of humour and a genuine rapport. Craven and Locke (who also played Mercury, Beast's first kill in the original) offer up a lot of anecdotes and do a good job of compare and contrast between the two versions. There is also a great moment when the pair realise that they may have made a gaff in the first movie, regarding the dead body of Susan, and they are also frank enough to disagree with some of the choices that Aja, himself, made with the update.

Surviving The Hills: The Making Of The Hills Have Eyes is a very decent, in-depth documentary that runs for 50.20 mins. Incorporating interviews with the main cast and crew, make-up tests, copious behind-the-scenes footage and special effects revelations from the extensive prosthetics of the mutants to the firing of a bullet through someone's head, the feature covers eight key sequences with depth, detail and clarity. The initial vehicle crash gets quite a comprehensive chronicling. A much better documentary than you would expect for a horror remake.

Further insight into the making of the film is supplied with the Production Diaries, ten minutes of crew dissection into the workings and mechanics of filming the remake, and suffering the hard-going conditions of shooting in the desert. Unique to the R1 release, this is reasonably good value as well.

I won't waste any time discussing the dire video for Leave The Broken Hearts by The Finalist. And so, barring a cool trailer for NightWatch, that's your lot with this R1 edition and, to be fair, it's not a bad selection at all, covering nearly all bases with vigour and intelligence.

A part-jumbled, part dead-on reworking of Craven's gut-punching original. We lose the character of the cannibals and the unique twisting of societal values in favour of a more episodic shock-fest that, whilst deliciously nasty in places, still feels far less savage than it ought to. Personally, I like the film. It makes a good companion-piece to the classic original, although I think that Aja's additions are actually quite unnecessary. The story is much scarier when the bad guys are just horrible in-breeds, rather than radiation-mutated outcasts.

The transfer is fine and the extras offer a fair degree of insight into the production, though that annoying music video still grates.