The Hills Have Eyes DVD Review 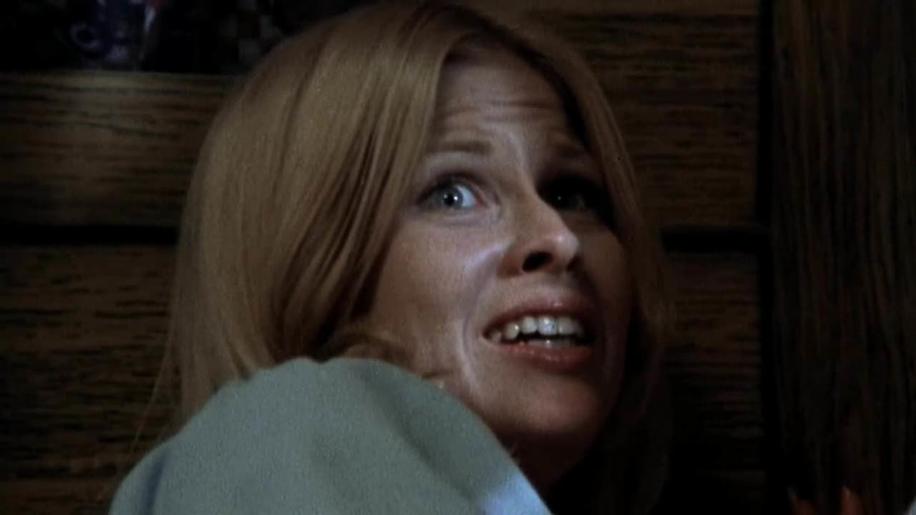 Anchor Bay have released The Hills Have Eyes in an anamorphic 1.85:1 image that has been taken directly from the original 16mm print, the negatives of which Craven assures us in the Commentary were in fairly bad shape. Now, at first glance, this picture is actually terrible. Far better than the old VHS, but still hardly what you'd expect from a cleaned-up transfer. Grain is everywhere on the picture, completely saturating it and rendering the image a murky and indistinct jumble. The picture behind all this manages to boast a decent reproduction of the colours and still affords a reasonable level of contrast - the changes fro light to dark and vice versa don't pose any problems for the disc. Skin tones are quite vivid, but not very realistic and the landscapes remain vague and toneless. Mind you, it is a desert, when all said and done.

The blacks are very strong though. The night-time scenes really benefit, especially old Fred as he stands fatefully by that window and Big Bob's last walk home. The flames of the burning tree and the explosion at the end are nicely captured. Close ups have a fair degree of detail - like Pluto's torn ankle - but don't expect anything finite.

Print damage is still in evidence. The picture is stable and suffers no frame judders that I can remember - the previous incarnations were terrible for this - but there is a white spot annoyingly prevalent for a lot of the film and some vertical lines situated in the left hand side of the screen. Digital defects may be there, but you'd be hard-pushed to notice them amidst all the grain. Still, this is the best that I have seen Hills look and, to be honest, I'm perfectly happy with it. Except for that white spot that really irritates me. Anchor Bay have gone to town here. They've put several tracks on this release. We've got a choice of the best sound mixes available in DD5.1 EX and DTS ES - which are hardly going to be stretched by a film that was mono in the first place - and the original restored mono track. Well, I've slated these remixes so many times in the past that I hardly feel the need to go over their charade again. The surround remixes here make an effort at directionality, with voices, rock-falls and gunshots being steered around - the off-camera taunting of Big Bob especially getting the treatment. There is also a fair degree of depth and the soundstage is certainly a little wider, but the sacrifice is credibility. Nothing in the remixes actually sounds convincing. Flicking through the audio options whilst the movie is on reveals that the mono mix is actually the best track here. Take for example the moment when Papa Jupiter pays his own Daddy a shocking visit - the smashing glass and ferocious roar are just as loud and aggressive in mono as they are in the surround, yet sound far more realistic. The remixes might make a more enveloping soundscape - it's still limited, though, just how much the sound is played about with - but they do so at the expense of authenticity.

Thing is though, I actually liked the deeper bass and slightly louder quality of the DTS ES mix. Oh, I don't know - this one is for each individual taste. The mono will please the purists though. There is a Commentary Track on Disc 1 from Wes Craven and producer Peter Locke which is great entertainment. The pair are never dull and constantly dust down the anecdotage. They are also quite teasing about the bits that had to be trimmed for the MPAA - such as the cookout scene of Jupiter waggling Big Bob's faces in his face, or the degree of violence perpetrated in the camper raid. Locke says that Lanier's screaming troubled him deeply and they reveal that they had some grandiose plans for some shots, like a pull back into space! Listen to them when Pluto fingers his shredded ankle. A very scene-specific and informative track, folks.

Over on Disc 2, we get two fantastic documentaries. The first entitled A Look Back At The Hills Have Eyes is a vast 54-minute retrospective examination into what it took to make the film - from Craven's reading of the Sawney Bean legend to Peter Locke's persuading of him to tackle another horror movie and set it in the desert. Craven was intrigued by the notion of so-called civilisation turning to savage means in order to survive. Cast members Robert Houston, Dee Wallace-Stone (who gets more attractive with age), Susan Lanier (who doesn't) Janus Blythe (who actually appeared in the woeful sequel - seeds of Craven's career plummet being sown right there) and Micheal Berryman join in with fun reminiscences and deliver an obvious fondness for the film and for Craven. Houston reveals that everybody had to cry for the audition. Blythe says that she had to run for hers, as well. Berryman has twenty-six birth defects and, despite his appearance in so many genre flicks that capitalise on his unusual looks, he is actually a wonderfully warm and gentle man. It also comes across how everybody suffered to make this film with 12-14 hour days in the dirt and grime, shooting to beat the sundown, horribly hot days and fearfully cold nights - playing desperate people trapped in the middle of nowhere wasn't hard because that's exactly what they were. Apparently the dogs were treated better. Good. Check out the set-dressing of bones and teeth for the costumes and cave of the cannibals - it's all stuff culled from Texas Chainsaw. Everyone is keen to explain how traumatised they were by the baby-snatch sequence, with Berryman the most poignant and evocative on this painful element. Overall, this is a great warts 'n' all documentary that covers all aspects of the production with respect and a wealth of detail.

The second documentary is unique to the R2 release. Whereas the R1 had a feature on the films of Wes Craven, we get a fabulous and altogether more rewarding 70-minute examination of milestone horror films called The American Nightmare, made by Adam Simon in 2000. Taking in the films and the eras in which they were made this features discussions with George Romero, Wes Craven, John Carpenter, David Cronenberg, Tobe Hooper, Tom Savini and a few academics. The films covered are Night Of The Living Dead, Dawn Of The Dead, Texas Chainsaw, Last House On The Left and Shivers but many more clips are shown from others. This, however, is not a celebration of classic contemporary horror, it is a sobering and grim realisation of the effects of society upon filmmakers, hastening these shocking trends in explicit and thought-provoking subject matter. Vietnam features heavily - Savini was a war-photographer there - as does imagery from race riots in Atlanta and the carnage of Kent State. Some of the images are quite distressing, folks, putting the movies in the shade. John Landis pops up too (although I can't imagine why) and he's being interviewed on the same set as the one seen in the features for American Werewolf - though he doesn't repeat himself here. Look out for the superb montage comparison of shoppers at a sale bonanza with the zombies' feeding frenzy from Dawn Of The Dead. An excellent documentary, even if it does dull the fun from some of these movies a little.

The we get the Alternative Ending. Don't bother with this. It is the last ten minutes of the film, re-jigged so that Doug's duel with Mars now comes before the skirmish with Jupiter, the violence has been trimmed and it is all topped off with an unbelievably sugar-coated reunion and a hands-of-peace final note. If that doesn't sound bad enough then consider that it is in appallingly damaged 4.3. It's a no-no.

The Restoration Demonstration delivers the first four minutes of the film with a white vertical line down the centre of the picture revealing the before and after of the process. Well, despite what I said earlier about the grain, let me assure you - it was once far, far worse.

Then we get a US and a German Theatrical Trailer and four TV spots, a biography of Wes Craven and a fairly extensive gallery of production stills, storyboards and promotional gubbins.

All in all, this is a great set of extras. Although much of its original brutality seems to have lost its edge, Hills Have Eyes still retains a unique and disturbing feel. It is gritty and raw and dangerous. Yet this violent and often repugnant element works in its favour. Low-budget, seat of your pants filming that is made by people who have genuine talent is always far more engrossing than the derivative mega-bucks alternative churned out by shallow hacks. Hills is original, exciting and frightening. We could all end up in the back of beyond. Let's just hope that we don't also end up on the locals' menu.

Anchor Bay have put together a proud and respectful package here. The image is obviously the best that they could do - given the condition of the original print - and the audio is what you make of it. The mono sounds just fine and the remixes just add a little bit of space and bass. Overall, this is highly recommended. Just make sure that you warn your girlfriend first.